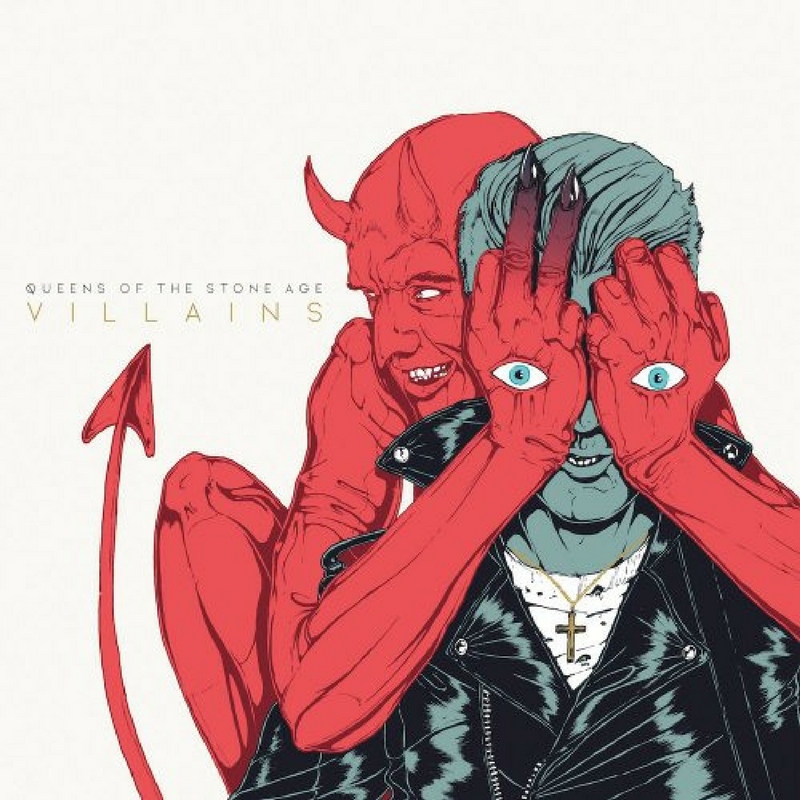 Queens Of The Stone Age deliver an exceptional and inventive album in ‘Villains’, that proves guitar music still has life in it yet.

There’s no denying that rock music in 2017 has almost become sapped dry of its élan vital and will imminently wither away, unless another musical revolution as big as grunge or Britpop, for example, happens. If you think I’m being cynical about all this then please explain Linkin Park’s atrocious LP One More Light. Explain Muse and their rock alienation with their latest single ‘Dig Down’ which offered nothing but monotonous lyricism and Matt Bellamy’s worst guitar solo to date. Look at lists on the internet for best modern ‘rock’ bands going and one will find that metal bands and featherweight indie-pop groups like The 1975 are needed to fill the spaces.

An undeniable dichotomy, within the music industry, which no one really notices, is that you either go pop rock or go metal to make it as a successful modern ‘rock’ band today – that’s what the market has swerved towards. The middle ground, if you will, where all the experimentation can transpire, has been squandered for far too long. Gene Simmons was wrong when he said rock was dead and, hopefully, he will always be wrong. So where does the solution lie?

Rising from the ashes of ‘90s stoner rock band Kyuss, Queens Of The Stone Age’s discography is one of impeccable artistic acclaim for rock music and has held the means for a rock rejuvenation for some time. The frontman and brains behind QOTSA, Josh Homme, has conjured up some of the most delectable guitar riffage humanly possible and has furthermore been challenging what rock music actually is throughout his entire career. To suggest that QOTSA have had control of this middle ground for over 20 years is not wholly irrational.

Homme, with QOTSA, has assimilated the stoner rock vibe, a kind of imbibing drug euphoria, from his early days in Kyuss with their 1998 self-titled debut when it was just him and former Kyuss bandmate Alfredo Hernandez. This influenced future QOTSA records and led the way for expansion and exploration of the different meanings and hidden properties of rock for the iconic multi-instrumentalist. Arguably, the remarkable Rated R (2000) is their best album to date but for others, and in commercial terms, it is Songs For The Deaf (2002) that takes the hot spot, featuring ex-Screaming Trees vocalist Mark Lanegan (who released Gargoyle earlier this year) taking up lead vocals on some of the tracks and the hard-hitting Dave Grohl on drums. These two would collaborate extensively on many of Homme’s future side projects including Them Crooked Vultures (supergroup consisting of Homme, Grohl and former Led Zeppelin bassist John Paul Jones) and Eagles Of Death Metal (co-founded with Jesse Hughes).

QOTSA’s previous album …Like Clockwork (2013) was an extraordinary work of collaboration that revived interest in the band after a very long time away. After this Homme voluntarily made the atypical move to make …Like Clockwork under the indie label Matador – very few artists willingly make the move from major to indie. The opening track ‘Keep Your Eyes Peeled’ and ‘Kalopsia’ encapsulated Homme’s experimentation whilst ‘I Sat By The Ocean’ and ‘If I Had A Tail’ emphasised the sonic crispiness that differentiated itself from the boorish Era Vulgaris (2007). In other words, a move away from the stoner rock influences and onto something else. QOTSA’s new album Villains, also under the Matador label, is even more intriguing than ever before – notably, it’s the first QOTSA album to not feature any special guests.

Ironically, Homme’s main influence this time round is dance music. Funnily enough, pop megastar Mark Ronson oversaw the production which has had a profound effect on the music as, unlike …Like Clockwork, it necessitates that loose, care-free notion of pop albums. Ronson’s beat-centric pop intervention has done wonders for this LP as Villains is not a submission to the sell-out mainstream like Linkin Park did with One More Light or what Coldplay did with Ghost Stories (2014) – quite the antithesis.

The second track ‘The Way You Used To’ is an extremely fun and unusually upbeat track to hear from QOTSA. Quirky guitar riffs like the ones here do not tend to fall in line with Homme’s style of playing. Whilst listening to this record, one cannot ignore the avant-pop influences of David Bowie -even if it was not intentional. Homme’s vocals on the opening track ‘Feet Don’t Fail Me,’ which takes the listener on a journey through his life, mimics Bowie chiefly on the line “To be so civilized, one must tell civil lies” with those paradigmatic, solemn ringing vocals that Bowie interspersed a lot on his final album Blackstar. ‘Feet Don’t Fail Me’ illustrates that sometimes, one must go through that certain level of hardship as a musician, or in Homme’s case a rock star, before gaining popularity in future endeavours. Musically, the track opens with a steady rise of audible grandeur before transitioning into QOTSA’s powerhouse of rock’n’roll elation.

Villains delineates itself massively from early QOTSA albums because the listener has no idea what to expect, particularly after …Like Clockwork’s release. In a recent mini interview with Absolute Radio, Homme talks about Villains also being partially inspired by 1920s swing and jazz music. The closer ‘Villains Of Circumstance’ and its chorus mould the jazz and the Bowie-esque avant-pop together for one of Homme’s most symptomatic songs to date and he has never sung so angelically before now. For a blast-to-the-past experience, ‘Head Like A Haunted House’ assures us that QOTSA can still muster a highly energetic masterpiece that is reminiscent of 2000’s ‘Feel Good Hit Of The Summer’. Michael Shuman’s bass is enticing here as well as on the track ‘Fortress’. This track opens with a somewhat mysterious ambience and synth effects before Homme sings with deep emotion roaming his vocals throughout. The line “It ain’t if you fall but how you rise that says who you really are” in the chorus is the lyrical eye-gazer of this LP.

Other moments like the fire-cracking outro to ‘The Evil Has Landed’ and the song ‘Domesticated Animals,’ criticising the masses and popular culture, Villains is a historical landmark for rock music. The Homme-Ronson collaboration has simply paid dividends that the rock community should pay homage to. It’s always been a case of sitting back and accepting that QOTSA exist and make incredible records – nothing more. What needs to happen now is to recognize that albums like Villains could potentially pivot rock music into a state of revitalisation which brings us back to my argument earlier. The music industry needs to realise that there is more to rock than meets the eye, is still capable of invention and re-birth, and Villains has proven this. Well done Josh Homme & co. for such an enthralling album! (9/10) (Harry Beynon)

Listen to Villains here via Spotify, and tell us what you think below!