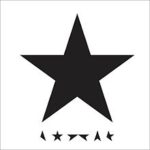 For nearly fifty years, David Bowie has made a career from leaving his past behind him and forging a path for the future, for music as well as himself, making some of the most forward-thinking and celebrated and varied pop in the history of the genre and inspiring countless hundreds of other innovative artists. Truly, his is one of the most totemic reputations in all of popular culture, not just music. Following a worryingly long period of absence spanning very nearly a decade, the changeling returned in January 2013 with The Next Day, an album whose very essence was about positioning Bowie in relation to his own history and back catalogue, right down to the artwork which was a mutilation of 1977’s “Heroes”. Its reflective and studied poise won plenty of critical and popular praise, but now, having burnished his own legacy, Bowie seeks to actually add to that body of work with his 25th album, Blackstar, a different and altogether more radical proposition.

Teaming up with a quartet of New York-based avant-garde jazz artists, led by the legendarily versatile saxophonist Donny McCaslin, Blackstar has arrived in pretty much the same way as The Next Day did – fully formed, suddenly and without the kind of ceremony upon which social media thrives, all of which has seemed to weirdly work in its favour. The Guardian has pointed out that it’s the first Bowie album without a picture of him on its front cover, but furthermore, without any name either, it bears no visual clue as to its creator. This stark, monochrome presentation is a reflection of its contents, with its 69 year old creator challenging even the most familiar fan about what his albums can and should sound like.

Blackstar opens with the 10-minute title track, released as a teaser just over a month ago, and the most defiantly avant-garde moment on the album. A multi-segmented torch song, marked by sighing skronks of sax, spooky electronica and shuffling jazz drums that could have come from Portishead’s Third, it’s a startling complex and perfectly executed vision of the future that sounds like his 1994 Outside crossbred with ‘“Heroes”’. Changing direction and settling down just over four minutes in, Bowie’s voice is as quavering and rich as ever, displaying mournful strength and vulnerability at the same time.

The other trailer track, ‘Lazarus’, with its disturbing and haunting video, is another notable highlight. With the most sumptuous build-up and breakdown, it sees Bowie, pop’s ultimate Lazarus figure, being gently self-referential. Reverberations of guitar pierce the luxuriant, cinematic fog as Bowie croons “I’ve got scars that can’t be seen”. Similarly unsettling are ‘Girl Loves Me’, violent in its undertones despite its title and lyrics, and the confessional ‘Dollar Days’. Defiantly off-beat in texture and about as far away from pop as Bowie has ever ventured, eschewing melody for atmosphere, everything hints at trauma, unease, signalling a man who couldn’t be satisfied with his life’s work even if he tried, always eager to do more and try new things. “I’m dying to push their backs against the grain / and fool them all again and again”, he mutters on ‘Dollar Days’ – an epitaph for Bowie’s career, if ever there was one.

Elsewhere, in the faster-paced moments, ‘Sue (Or In A Season Of Crime)’ makes an appearance in re-recorded form from the one added to 2014’s best of album Nothing Has Changed with a rattling, junglist undertow faintly reminiscent of the underrated dance experiments of 1997’s Earthling. The frenetic trash-can beat and free jazz explorations of ‘’Tis A Pity She Was A Whore’ passes by in a compelling blur, is a perfect example of the kind of vision Bowie wants to communicate with Blackstar, sounding structured and yet with room enough inside for spontaneity and improvisation. Proceedings end with the double-entendre title of ‘I Can’t Give Everything Away’, a serene, lilting track with a languid rhythm.

At only seven tracks long, Blackstar is devastatingly singular. Where The Next Day was all about Bowie revelling in his past and reminding us about what he had achieved, he actively wants to add to that past with Blackstar, not only create something for the ages but also to tell us how far he still intends to go. In this goal, he succeeds completely, delivering arguably the most experimental and challenging album of his impressive career. (9/10)

Listen to Blackstar here, and tell us what you think below!