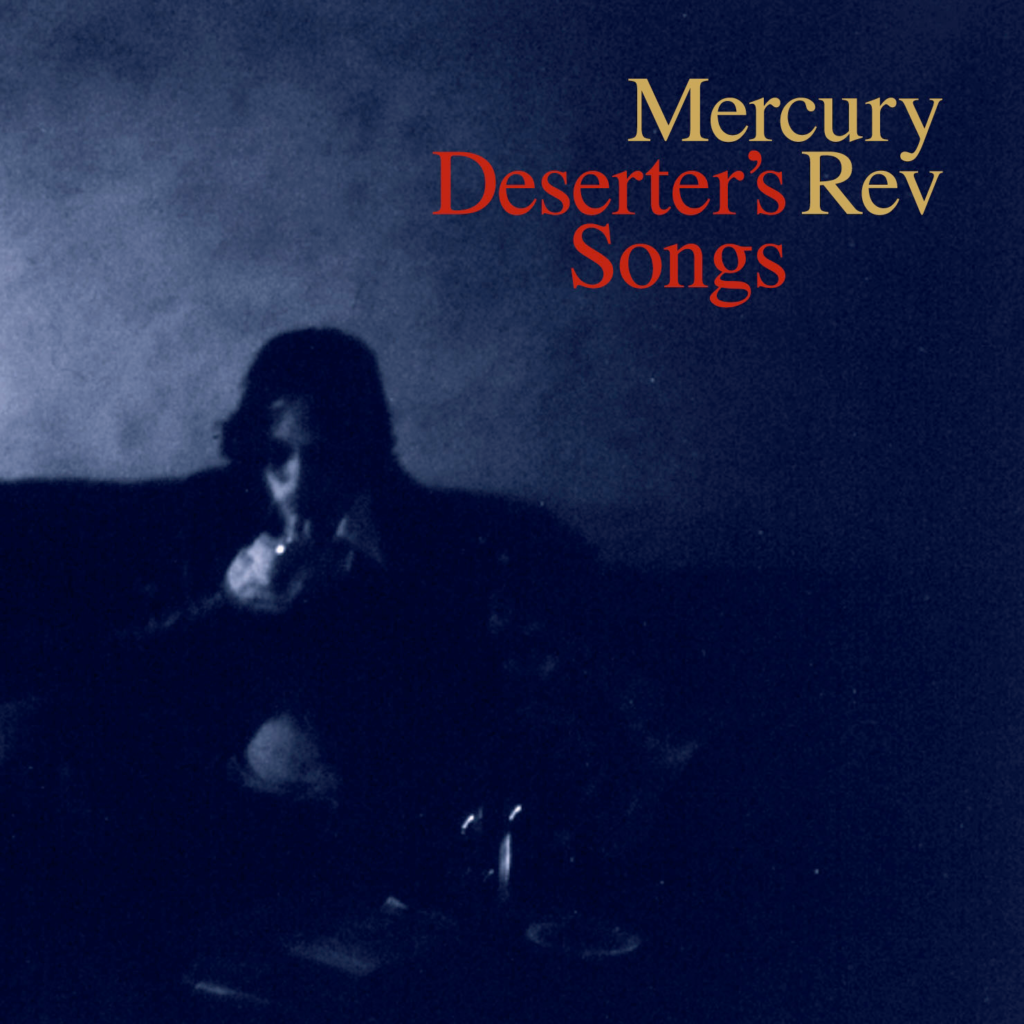 The story behind Deserter’s Songs, one of the most unabashedly romantic albums ever recorded in popular music, is also one of the most heartening. Its creators, American psychedelic rock outfit Mercury Rev, went from toiling in obscurity to the toast of the music press and the top of 1998’s albums-of-the-year lists almost overnight.

Demoralised and disillusioned by the lack of success of their third record, 1995’s See You On The Other Side which frontman Jonathan Donahue had considered to be their best work, Mercury Rev barely existed by late 1996. They requested to be dropped from their record label; drummer Jimy Chambers had quit; lawyers and management had been released and the band was in deep debt.

Amid this turmoil and a bout of depression, Donahue began to revisit the music and stories he’d loved growing up, including Tale Spinners For Children, a collection of spoken-word fairy tales set to classical music. Eventually, he and the band began to communicate again and decided to make one final album just for themselves, indulging their own musical and artistic fantasies and unshackled by the expectations of any commercial returns, before splitting up for good.

Taking Donahue’s demos, which were consciously created with simplicity in mind, and exploring orchestral instrumentation from timpani to flutes and unfashionable specialist technologies like the bowed-saw and Theremin – a mainstay of tacky B-movie soundtracks – the band retained long-time producer and sometime bass player Dave Fridmann to helm what would become Deserter’s Songs. One masterstroke proved to be Fridmann’s decision to record the music to 35mm magnetic film, a highly unusual move but one which gave the already ethereal mixes an extra, dreamlike layer as well as a cinematic quality.

Essentially, Mercury Rev inverted the formula of their previously dense, ornate progressive psychedelia. The sound of Deserter’s Songs was radically different, and built upon the principle of accessibility rather than complexity, yet still unmistakably theirs. It came across as a combination of Disney songs, Tim Burton film scores, Cole Porter, Pet Sounds and dusty vaudeville, yet was grounded in just the right amount of rock ballad orthodoxy to appeal to a mainstream rock/indie audience. Jonathan Donahue’s shaky alto voice is the glue that bind all these elements together – sounding tremulous and heartbroken but also hopeful and occasionally ecstatic. It’s also a very succinct and quite brief collection – excluding the strange instrumental interludes, there’s only eight actual songs here.

Deserter’s Songs commences with a beguiling opening sequence of three exquisite songs. The gentle lull and sway of ‘Holes’ sounds like Coldplay if they were ever artistically daring. Just like the first moments of having woken from a dream and you can still remember the vague outlines of it, Donahue’s voice ebbs and undulates over the simplest of piano riffs, but it’s the subtle adornments, swelling orchestral heaves and soft, sepia production that make it truly take flight and soar heavenwards.

Throughout, Donahue’s lyrics operate like dream logic, either taking place in the subconscious or evoking strange imagery that only occurs there – often, this is stated explicitly. The following two tracks ‘Tonite It Shows’ and ‘Endlessly’ respectively begin with the lyrics “Into a dream, I took a turn / and promised to return” and “Standing in a dream, weaving through the crowded streets / leaving you again endlessly”. The former is a Disney-fied reverie of memory, the latter a fantasia about romance and courtship that interpolates the refrain of ‘Silent Night’ rendered by radiant flutes and eye-welling orchestra swells. Their sense of warmth and comfort is blown up to cosmic proportions, while retaining the underlying melancholy so that they apply to both the sad, regretful listener and the happy, contented one.

Having opened with such an emotionally devastating combination, Deserter’s Songs begins to fragment and disrupt its own atmosphere with a clutch of outriders and curious instrumentals, which feel an integral part of the whole album but remind the listener that Mercury Rev’s roots were in psychedelic and experimental music. ‘Hudson Line’, for example, in which bandmate Grasshopper takes over lead vocals, is built on stiff, onomatopoeic drums and blasts of saxophone that sound like the passing train that the protagonist is trying to hop. It’s the most well-defined production in terms of clarity, compared to the fuzzy edges that characterise Deserter’s Songs. The compelling ‘The Funny Bird’, on the other hand, is a remarkable outlier and certainly the most avant-garde.

Deserter’s Songs’ lead-off single, the moment that made the music press pay attention to Mercury Rev for the first time in years and which provided the band with their first bona-fide hit, was ‘Goddess On A Hiway’. Remarkably, for such a purely accessible moment, Donahue had been sitting on the song for almost decade, having written it in 1989 when still a member of The Flaming Lips, and took a long time to be persuaded to resurrect it by his bandmates. Disarming and cerebral without being overbearing or earnest, it shifts from the personal to the ecological (“far above the ocean, deep under the sea / there’s a river runnin’ dry / ‘cos of you and me”), and in his helium-high voice, he croons “And I know… it ain’t gonna last” with a conviction that bears the entire song aloft and into the realms of an all-time indie classic. Similarly, despite Fridmann’s remarkable work on the production, it’s Donahue’s incredibly fragile and human voice, somewhere between a more lovestruck Syd Barrett and Neil Young at his most heartbroken, which is the real key to Deserter’s Songs and its enduring appeal.

The cloudbursting wanderlust of ‘Opus 40’, named after a stone sculpture in the band’s native Catskills and which provided the band with another hit single, showed the benefit of Fridmann foregrounded existing elements of Mercury Rev’s sound, of classic ‘60s/’70s rock influences like Neil Young and The Band, that had been previously hidden back on their frazzled early work. It’s no surprise that The Band’s Levon Helm appears on drums on this song, for instance, or that Garth Hudson does saxophone on the aforementioned ‘Hudson Line’.

Following all of these precisely observed studies in lyrical and sonic beauty, Mercury Rev finish off with a raging blowout of a song. Featuring house-esque keyboards that could have come off a novelty rave hit, ‘Delta Sun Bottleneck Stomp’ was so kinetic that it even lent itself to a Chemical Brothers remix, which the English producers did in return for Donahue guesting on their 1997 epic ‘The Private Psychedelic Reel’. Taking inspiration from the Stones’ ‘Sympathy For The Devil’ and The Doors’ ‘Hello I Love You’ for its coda, it showed that Mercury Rev, for all their retro influences, were all about ambition rather than lazy hagiography.

Deserter’s Songs not only rescued Mercury Rev’s career, it also directly aided that of The Flaming Lips, whose 1999 breakthrough album The Soft Bulletin was being produced by Fridmann at exactly the same time and which used similar production techniques. Its success stood out in the context of burgeoning nu-metal, drab post-Britpop guitar music, and the general excesses of the mainstream at in the late Nineties, and two decades on, its sound has informed the likes of Fleet Foxes, Arcade Fire and Tame Impala, while the likes of Coldplay and Snow Patrol borrowed the structure of tracks like ‘Goddess On A Hiway’ and ‘Opus 40’ to create their arena-filling sounds.

In the beauty stakes, Deserter’s Songs was one of the achievements of the decade in anyone’s book, and all the more extraordinary that it should come out of the band’s darkest and most uncertain hour. In the new millennium, Mercury Rev very nearly emulated their own achievement with 2001’s wonderful follow-up All Is Dream, which doubled down on the fantastical elements of Deserter’s Songs and went even more ambitious than the last time. At this point, the group was scoring UK Top 20 hits and appearing on ‘Top of the Pops’, bordering on a proper breakthrough. However, their momentum was halted with the good-but-not-great 2005 album The Secret Migration, since when Mercury Rev have only operated sporadically. 2015’s The Light In You had been their first proper album in over five years. However, in taking Deserter’s Songs on the road for its 20th anniversary with a set of acoustic shows this winter, perhaps Donahue and his bandmates can rediscover their muse.

Listen to Deserter’s Songs by Mercury Rev here via Spotify, and tell us what you think below!