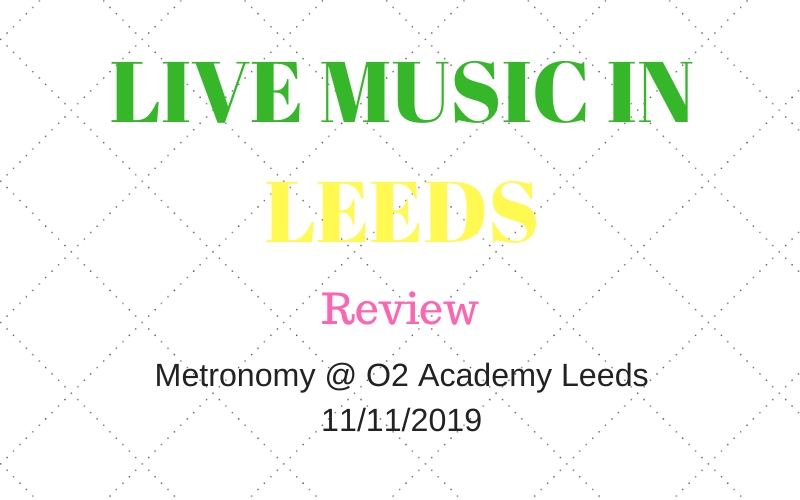 In 2019, with five excellent albums in a row spanning a decade, Joe Mount’s Metronomy are now one of the biggest live draws on the British indie circuit. Having slayed various festivals throughout Europe over the summer – a context in which Metronomy have always seemed to thrive, unsurprising given their loose and unself-conscious disposition – the outfit’s current UK tour came through Leeds and called in at the O2 Academy.

Before that, however, there was the small matter of Brighton-based newcomers Squid in the support slot. Regularly playlisted by BBC Radio 6Music since ‘The Dial’ appeared at the end of last year, their recent EP Town Centre, they’re one of the most promising new indie acts that the country has produced in quite a while. Characterised by singer-drummer Ollie Judge’s expressive, meandering yelping, which comes across like a combination of Black Francis and Mark E Smith, they’re essentially a punk band with a fondness for jazz. While they perhaps don’t have quite enough material for their 45-minute support slot – the presence of one too many of their ambient, jazz-led interludes seem to test the patience of a crowd up for dancing – firestorm tracks like ‘Houseplants’ and ‘Match Bet’ really hit the mark.

Right from the start of Metronomy’s set, Joe Mount and his trusted lieutenants exude a vibe that suggests that they take the art of having fun very seriously. Opening with ‘Lately’, the lead single from the new album, the eclectic, mixtape nature of Metronomy Forever makes it ideal for live performances. Tracks like the sly, knowing Prince pastiche ‘Sex Emoji’, the punky ‘Insecurity’ and the moody ‘Walking In The Dark’ sit perfectly alongside the group’s increasingly large arsenal of jaunty bangers from albums past. All are dispatched with a business-like sense of efficiency, of a well-drilled band who know exactly what they’re doing and how to do it.

Summer 08, the closest thing that could be considered a mis-step in Metronomy’s catalogue, is only represented by the catty ‘Old Skool’, while Nights Out, the band’s break-out record celebrating its 10th anniversary this year, is raided for a brilliant encore of ‘Radio Ladio’. The best reception of all, of course, is reserved for the evergreen ‘The Look’, whose parent album The English Riviera is represented handsomely. Every moment of their perfectly paced set, so strong that tracks like ‘Holiday’ now have to be sacrificed, was delivered by a band with a keen sense of their own identity, something that comes from Mount himself as their creative centre. Metronomy are precisely the kind of distinctive, slightly off-kilter pop act that the British indie scene has been so expert at launching for decades now. Long may they continue.