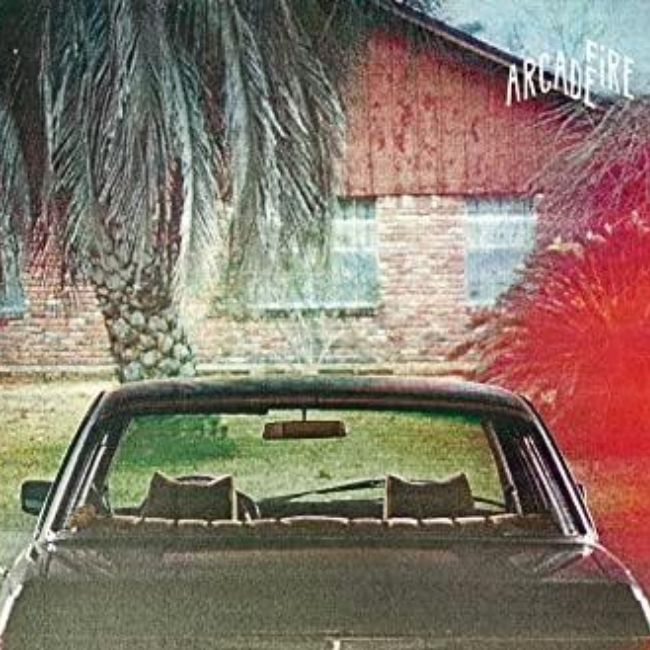 It’s hard to remember a time when Arcade Fire weren’t a top-tier, festival headlining act. Right from their flawless first album Funeral, released quietly in 2004 and which took more than a year to become a sleeper hit, it has seemed as though the Canadian group have been among the most prestigious acts of the 21st century. But as great as their epochal debutand its 2007 follow-up Neon Bible were, it took an album with the scope and sonic power of The Suburbs to fully cement Arcade Fire’s transition from acclaimed cult indie favourites to bona-fide conquerers of the mainstream. Small markers of cultural penetration, such as when Mark Ronson, Alex Greenwald and Rose Elinor Dougall playfully covered the album’s acclaimed single ‘We Used To Wait’ for Jo Whiley’s obnoxious Live Lounge segment on Radio 1, are signs that a band is truly out of the indie ghetto.

Although they had achieved regular radio rotation and platinum sales by 2010, the sextet were not about to settle into a cosy routine of recording, releasing and touring. Rather, they opted to challenge themselves to sound as grandiose as possible while still retaining that all-important human touch that bands all too often lose when they catch a dose of ‘the big music’. Of course, Arcade Fire’s music had always sounded big, but The Suburbs was a step up again. It took the sense of personal apocalypse that characterised Funeral and turned it outwards, communicating their message through earthy, complex arrangements that felt like an update of Sonic Youth’s iconic Daydream Nation for the millennial generation. The band effortlessly fused personal themes with political, social and economic ones and projecting onto the biggest canvas imaginable. But that subject matter didn’t weigh down the album, instead hovering over and among it like a fine mist.

Throughout The Suburbs, there’s a detectable thread of disaffection with the nature of modern life, a sense of creeping dread about the future percolated through every moment, about how families, communities and cultural traditions are eroded in slow-motion through the social atomisation caused by rapacious capitalism and technological progress. ‘We Used To Wait’ hints at the modern consumer’s demand for instant gratification and the emptiness that accompanies it. The Neil Young-esque ‘Wasted Hours’ speaks to ennui and existentialism, while the moody, mid-tempo ‘Deep Blue’ concerns the creep of artificial intelligence. Many more tracks, particularly Beatles-y opener ‘The Suburbs’, ‘Modern Man’ and the epic double-parted ‘Sprawl’ sequence, evoke the curious dislocation that accompanies living in anonymous communities of identical houses and the non-stop treadmill of material aspiration that often entails – essentially, Talking Heads’ mid-life crisis soundtrack ‘Once In A Lifetime’ mined even further. Many critics inevitably compared The Suburbs to Radiohead’s 1997 opus OK Computer. For once, this kind of overused equivalency within rock criticism circles was actually justified, but perhaps a more accurate comparison would be to Bruce Springsteen’s contemplative and often funereal The River.

But for all the bleakness that many pointed out, there was a human warmth and an underlying sense of hope to The Suburbs that balanced it out. After all, Win Butler told the NME upon its release that the album was “neither a love letter to, nor an indictment of, the suburbs – it’s a letter from the suburbs”. This is critical to a proper understanding of The Suburbs – it is not just a dystopian masterpiece, but a nuanced understanding of what it means to grow older, gain responsibility and reckon with the headstrong certainties of youth. As well as its themes of alienation, aging and moral compromise, The Suburbs is also very explicitly an exercise in exploring nostalgia, about the loss of innocence and the (possibly elusive) search for certainty in a world that threatens to increasingly leave traditions of roots and community behind. The suburbs, for all their flaws, perhaps represent those roots, a possible chance for permanence amid The Way We Live Now.

This crucial second aspect to The Suburbs is often expressed in quite sentimental terms. On ‘Suburban War’, Butler sings “Let’s go for a drive and see the town tonight / There’s nothing to do, but I don’t mind when I’m with you.” On ‘City With No Children’, the sense of massive, inhuman odds stacked against the little guy is most stark. Then again, if you’re going to deal in sentiment, there’s a powerful argument to be made that its execution should be as panoramic and elegant as possible, and that’s exactly what Arcade Fire do. ‘Sprawl II (Mountains Beyond Mountains)’, topped off with a perfect Régine Chassagne vocal, is a slice of mutated disco that’s capable of filling the biggest spaces, preceded by a sweeping semi-orchestral overture in its first segment. Paradoxically, the band seem desperate to escape the sense of all-encompassing unease that characterises The Suburbs so beautifully, yet at the same time, they don’t want to leave it all behind. That tension of opposing emotions is at the heart of understanding the album’s greatness.

If all that makes The Suburbs sound rather weighty, that’s misleading. Butler and Chassagne are careful to inject proceedings with a bit more levity than the often overbearing gloom of Neon Bible contained. For instance, they skewer trend-following hipsters and cultural dilettantes on the light chamber-pop of ‘Rococo’. ‘Ready To Start’ is powered along smoothly by a Strokesy swing and piercing synth figure, while the Kraftwerkian pulse of ‘Half Light II (No Celebration)’ is a marvel. It’s all underpinned by some of the group’s most streamlined songwriting and loosest playing. Will Butler and Tim Kingsbury’s keyboards and guitar scapes are nuanced and textured; Jeremy Gara’s drums are sleek, doing the job of raising the most epic songs into the heavens but not intruding on the mix too much; while the enviable string section of Sarah Neufeld, Richard Reed Parry and Marika Anthony Shaw are as wonderful as ever.

Ten years on, The Suburbs feels like an anachronism in terms of its structure. It’s the kind of sprawling cultural statement that most bands simply don’t even think about making any more, let alone attempt. However, it scaled up Arcade Fire’s sound, further widening and deepening of their aesthetic in a manner that seemed implausible after Neon Bible. The arena-filling sound from The Suburbs has also influenced a subsequent generation of bands such as Mumford & Sons and Bastille, while also forcing existing acts such as Coldplay and Muse to up their own games. Although, it must be said, that few guitar-based bands have come close to even emulating an achievement like The Suburbs.

Even Arcade Fire themselves haven’t tried to do so. Three years on, they released Reflektor, a very different kind of masterpiece that cast their net over a much wider range of sonic influences, resulting in a White Album-esque smorgasbord of delights. 2017’s lukewarm Everything Now represented the first genuine blip in their career, although various members have embarked on a number of rewarding solo efforts. But the arc of their first four records, pretty much unrivalled in terms of quality in recent memory, means that Arcade Fire still have plenty of goodwill left in the bank. The Suburbs is one of the two tentpoles of that reputation.

Listen to The Suburbs by Arcade Fire here via Spotify, and tell us what you think below!