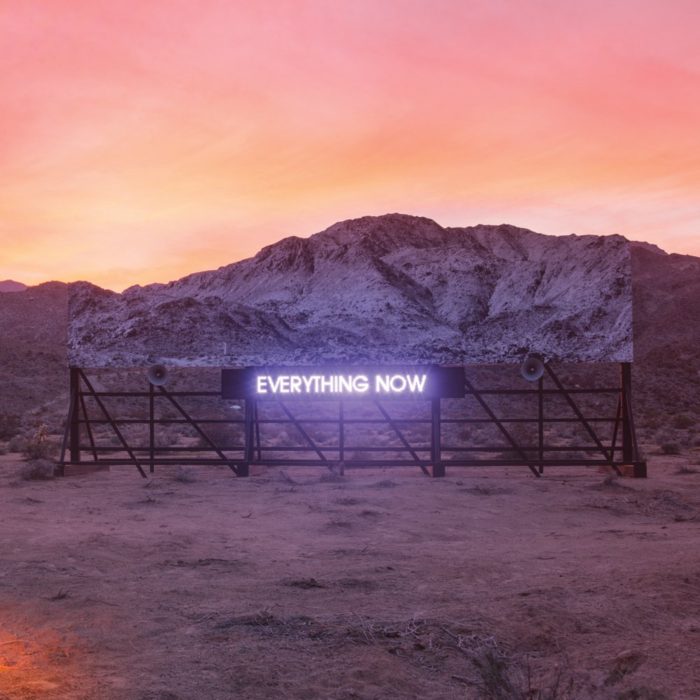 Anything other than a terrific album from Arcade Fire feels like a let-down, and on ‘Everything Now’ we have to face just that.

The idea of following a classic album is one which daunts many bands, some to the point of breaking; from The Strokes, to The Libertines, to the New Radicals, there are countless examples of ‘one album wonders’ littered in the history of pop. However, after four albums of brilliance, this has never been a criticism which one could throw at everyone’s favourite multi-instrumentalist six-piece, Arcade Fire. Until Everything Now.

The unrelenting success of Arcade Fire has led to the band becoming one the biggest cult-acts in music today. 2004’s Funeral will forever go down as a modern-day masterpiece with its subtly grandiose sound, with an anthemic appeal in droves, and The Suburbs rightly beat off competition from the highest echelon of the music industry to win the Grammy for album of the year in 2011 for its outward thinking diverse rock. All the while the intermitting Neon Bible was the first sign that the band could be a socially-conscious collective. Finally, Reflektor is the definition of a grower, it’s long soundscapes worming its way into your head in the short and long-term. Simply put Arcade Fire are the best band of a generation.

Which is why Everything Now, the fifth LP from the Canadians, is so disappointing. Four albums which can all be rated from exceptionally good to classic means that we have come to expect greatness from the band. Anything other than a terrific album from Arcade Fire feels like a let-down, and on Everything Now we have to face just that – a not terrific Arcade Fire album.

That’s not to say that the record isn’t a solid album because it is… but the record misses the mark on more occasions than the band ever have in their 16-year history. Even from a marketing perspective, the band seems to have lost its way; by descending into a cave of ironic marketing and bitterly self-aware success (see interactions with KFC on Twitter), Everything Now is as distant the band has ever been from the listener.

The marketing makes sense when listening to the album and its feelings of skepticism towards the new medias and technology. But there is a sense that this is merely stepping over old ground; Neon Bible showed tentative steps in the questioning of technology with tracks like ‘Antichrist Television Blues’ previously discussing the merits of chasing fame in the modern-day, whilst Reflektor’s main topic of interest was the relationship between humans and how we can connect with one another – hell it was even the soundtrack to Oscar-nominated Her, a film based around a humans love of new technology and the heartbreak it can offer.

The album begins with two of three title-tracks on the record and does indeed get the album off to a rousing start; the 46 seconds of the opening ‘Everything_Now (Continued)’ crumbles in on itself in a cacophony of electronic screeches before leading in nicely to the avert-pop of ‘Everything Now’. The lead-single for the album is already a welcome addition to the band’s live catalogue with its Abba-infused pianos leading into a wild sound of panpipes and guitars.

The argument could easily be made that Everything Now is a top-heavy album, three of the album’s four singles are back-to-back in the album’s first 14 minutes, leaving the rest of the album without a pop hook for long stretches.

‘Signs Of Life’ follows ‘Everything Now’, with its slower tempo showing a kind relent away from the frantic five minutes that preceded it. The analogy of kids growing up in a meaningless world, partaking in meaningless sex to reflect the unresponsive new age of media is a striking one and one which certainly packs a punch. Instrumentally, the track is one of the best on the record through its use of swirling synths and gritting guitars being contrasted by hand-clapped percussion and brass hooks.

The frantic electronic introduction to ‘Creature Comfort’ immediately stands out, whilst its jaunty bells and dispersed drums allow Win Butler and Regine Chassagne to show their unique musical connection which has only grown with time. The diatribe of a boy and girl struggling in the modern day is one which has been done plenty of times by the collective, but it works well in the context of the record.

Though for all the positives, there isn’t a standout single in the way of ‘Wake Up’, ‘No Cars Go’, ‘Ready To Start’ and ‘Afterlife’ before it, and the record suffers for it.

What Everything Now does include is the two worst songs ever written by Arcade Fire. ‘Peter Pan’ is a laborious combination of bland synths and meaningless lyrics. The laughable chorus of “Be my Wendy, I’ll be your Peter Pan / Come on baby, take my hand / We can walk if you don’t feel like flying” doesn’t fit the themes of the album and kills the album dead after the rollicking start.

The following ‘Chemistry’ is a contender for worst track of the year – it’s a painful misstep of reggae-meets-indie-rock. The less said about it the better, but its plodding dad-rock bridge is stale, and its repetitive lyricism is tiresome and sounds incomplete.

‘Infinite Content’ also falls victim to an inconsequential structure; the track is a jolt of aggression that evokes hints of punk but lacks any substance to really say anything about the modern day. The fact that ‘Infinite_Content’ follows with its slower sound and repeated lyrics “Infinite content, infinite content / We’re infinitely content” does no favours for the album.

Elsewhere, the record does improve and show signs of life, with single ‘Electric Blue’ being led by the wondrous falsetto of Chassagne (side note, does the background of the chorus remind anyone of a certain animated penguin…?). While ‘Good God Damn’ works well with its downbeat tempo that teases tearing into life but instead remains true to its funk-infused guitars and Butler’s vocal.

‘Put Your Money On Me’ is an obvious contender for sleeper-hit of the record with its pleasing krautrock-tinged beats and superb build allowing the band to show the anthemic sound that Arcade Fire built their name on.

The debate about which album is Arcade Fire’s best may never be answered fully, but in Everything Now we know which is their worst. Whether it be through lazy songwriting, tedious and overbearing marketing, or just the weight of its own expectations, Everything Now is a mixed affair which loses momentum quickly and struggles to regain it. Perhaps the new, more alarming question, should be ‘have Arcade Fire lost it?’ (6/10) (John Tindale)

Listen to Everything Now here via Spotify, and tell us what you think below!