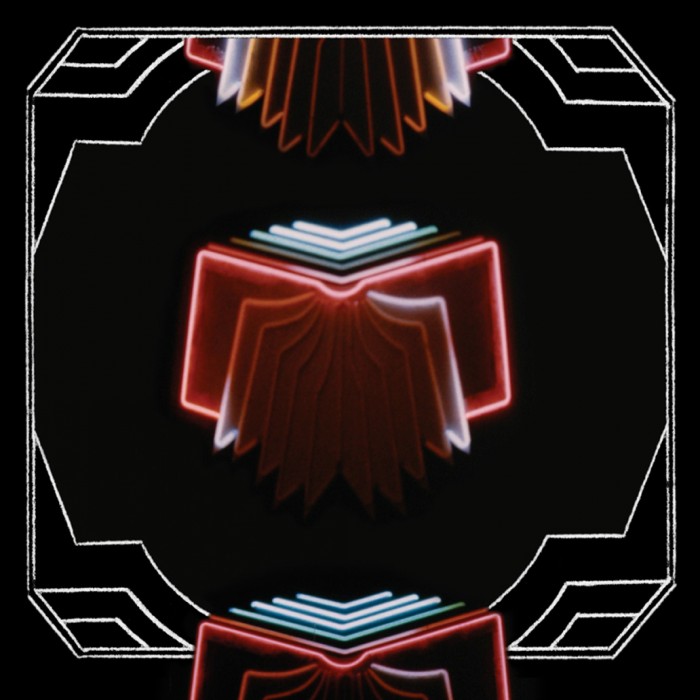 It feels somewhat strange feeling like you have to defend an album of such greatness, but then again, Arcade Fire‘s sophomore effort Neon Bible is not a conventional record. Sandwiched in-between two all-time classics in 2004’s Funeral and 2010’s The Suburbs, Neon Bible is often overlooked and unfairly so; here we have an album which featured highly on multiple compilation lists for both the album of the year and decade (we have it listed at #108 in our own list on our Greatest 200 Albums of the 2000s). Forgotten, it may be, but a decade after its release, the second album from the Canadians remains a massively important stepping stone, and, a true classic.

The biggest problem with the legacy of Neon Bible is that it isn’t the all-conquering Funeral. Here was an album which was as grandiose as it was intimate, featuring hit single after hit single, it put Arcade Fire firmly in the pop stratosphere. Three years later and a lot was to be expected for any follow-up, what direction were the band to take? Could they continue to release material of the same quality? Could they be a one album wonder like so many others? Neon Bible did more than enough to allay any fears.

Neon Bible, lyrically, features some of Win Butler’s best song-writing; where Funeral was an introverted affair, Neon Bible was extroverted, looking at the horrors of a world consumed by technology and the questioning of religion, with constant imagery to the darkness of the ocean (‘The Well And The Lighthouse’, ‘Black Wave’, ‘Bad Vibrations’ and ‘Black Mirror’ especially explore these themes). It would be this outward thinking lyricism which would be the precipice for the following The Suburbs and Reflektor.

Recorded in a disused church in Quebec, the album’s religious tones are only exaggerated, and on tracks like ‘My Body Is A Cage’, a wonderful track which speaks of the anxiety and the issues of religion (with direct references to Plato) and, of course, the titular ‘Neon Bible’ serve as excellent examples of a forward-thinking band – this was the sound of a band growing up.

From the album’s opening, it becomes clear that this isn’t the festival-friendly sound that had pre-dated it, and that is no bad thing. Opening track ‘Black Mirror’ is an urgent affair, as strings and sharp guitar follow the sounds of winds and crashing seas. It’s a glorious opener speaking of a dystopian, self-aware world and immediately sets the tone.

Still, the album does still have its moments of accessible pop and in ‘Keep The Car Running’ and ‘No Cars Go’, Arcade Fire penned two classic singles. The former’s lo-fi instrumentation, contrasted by the trademark harmonies of Regine and Win, serves as a near false alarm in comparison to ‘Black Mirror’ before it, while ‘No Cars Go’ remains as much an anthem now as it was then.

Fundamentally, the charm of Neon Bible lies its re-listenable nature; where Funeral’s longevity and huge sound can make it a draining listen, Neon Bible’s experimentation with instrumentally and lack of behemoths, make it an album that is easy to repeat and revisit. The debate about which Arcade Fire album is their best will never truly be answered, they’re all classics, but in Neon Bible we have one glorious transitional album.

Listen to Neon Bible here via Spotify, and tell us what you think below!