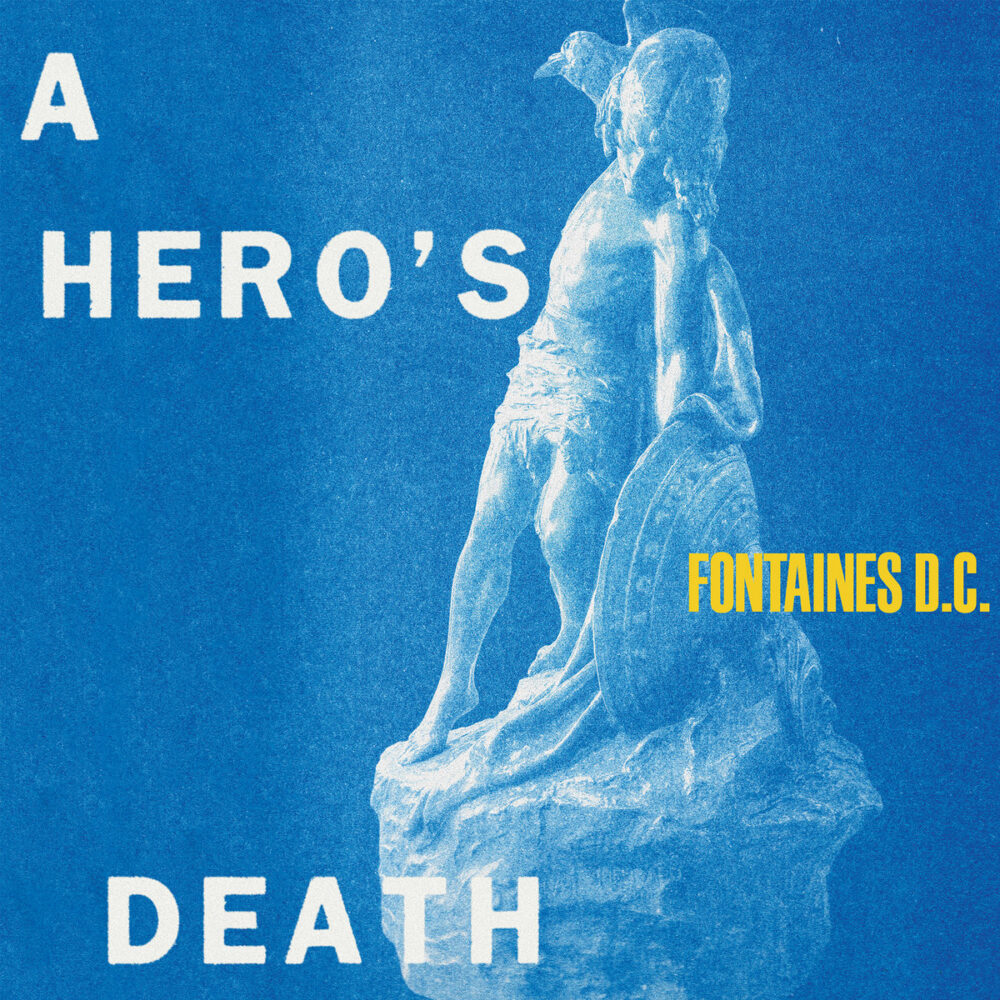 Having only formed in 2017, the Dublin-based group Fontaines D.C. propelled into popularity following the release of Dogrel in 2018. An accomplished and intelligent debut, it blared out a unique mix of post-punk and garage rock in an outstanding fashion, whilst frontman Grian Chatten’s lyrics triumphantly expressed the consequences of modernity on their native roots. Such a success has only furthered their reputation in league with fellow contemporaries Shame and IDLES, and in little over a year, they are ready to penetrate the ears of millions once more with their follow-up album A Hero’s Death.

The first single ‘I Don’t Belong’ starts the album off with slower and moodier guitars in comparison to the dry and blindingly short opener ‘Big’, from their debut album. It marks a clear indication of growth with a focussed and refined song writing approach, clearly striving to push away from any sense of familiarity. Following a repetitive chord structure, the track builds anticipation through the rhythm of the vocals and the increasing melodious guitar overdubs before the echoed lines “I don’t belong to anyone” wails into the forefront.

Just as you begin to think that Fontaines D.C.’s sound could not get any more intense than anything on Dogrel, nothing gets close to the ferocity of ‘A Lucid Dream’ and ‘Televised Mind’. Filled with swirls of feedback and roaring guitars alongside rapid-fire vocals and chaotic drumming, they both present an atmosphere unrivalled by the audibility of Dogrel. There is definitely a sense that the group’s sound has begun to mature into a different beast, however reminiscent the guitar tones are of the Arctic Monkeys. ‘Love Is The Main Thing’, clarifies deep emotions that often come in range with such a topic, alongside “tired of embracing / always floating / never devoting”, whilst continuing on with their approach of lyrical repetition.

Whilst the mid-way comedown ‘You Said’ delivers the catchiest riff on the record, ‘Oh Such A Spring’ heads into cross-genre territory. Its production presents an almost shoegaze-y aesthetic with ambient overtones, whilst its sound fits almost halfway between a ballad and a folk song. Its highly poetic lyricism is placed well above their usual punk energy, showing that the band have, indeed, moved in all directions on this new record.

‘A Hero’s Death’ is clearly the defining moment of the album, the title track screams of passionate momentum that fans both new and old alike will be pleased with. With an equal balance, it displays as much of their roots in high regard as their new and interesting developments. Described by Chatten as “a list of rules for the self”, it repeats the message that “life ain’t always empty” over and over to an extent that is leaves its listeners questioning the very assurance that it carries. The doop-woop style backing vocals delivered by the rest of the band is as genius as it is genuinely creativity.

‘Living In America’ might be the heaviest track ever written by the band, with enough groove to make it a live favourite, whilst ‘I Was Not Born’ lightens back up with the happy spirit of that present throughout Dogrel. ‘Sunny’ and ‘No’ are characterised by lower vocals that bring us back down to earth in a slower trance, both using acoustic guitars in a higher proportion to the earlier tracks, setting the stage for an intimate conclusion.

A Hero’s Death is a textbook-perfectportrayal of how a band can evolve in such a short time span. It succeeds in being distinguishable from Dogrel by putting a higher emphasis on psychological lyrical themes, whilst building an elaborative production to create a luscious wall of sound. (8/10) (Jack Walley)

Listen to A Hero’s Death by Fontaines D.C. here via Spotify, and tell us what you think below!