“Listen To Me, I’m On The Stereo” – A Beginner’s Guide to Pavement 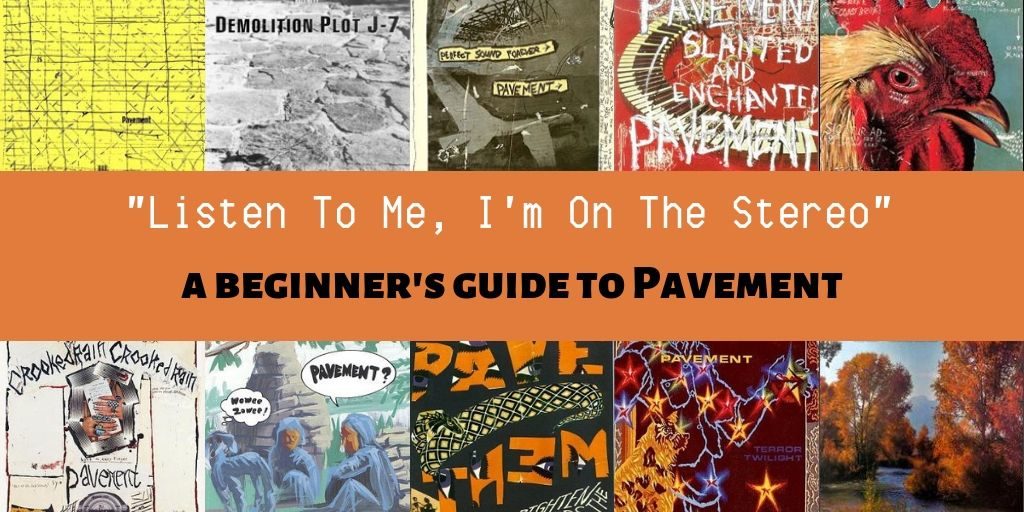 It’s been almost two decades since Pavement were active in any meaningful way, the group’s component parts quietly parting ways in the pursuit of solo projects in late 1999, but their legacy has grown more profound in their absence. Their influence has been notable in the subsequent development of American indie over the last 20 years, informing the sounds, vibes and demeanour of artists that range from The National to Mac DeMarco, and their discography, ranging from their earliest EPs at the turn of the Nineties to their final studio album Terror Twilight at the cusp of the new millennium, is one of the most revered catalogues in existence.

While Pavement weren’t afraid to plot their own course, equally they weren’t averse to accepting opportunities and helping hands along the way, in a manner that in the past had earned other bands accusations of ‘selling out’ – as if getting your music to a wider audience was in some way beneath a jobbing musician. So it was that they managed to get themselves on the bill for the lucrative travelling music carnival that was Lollapalooza in the mid-Nineties, while remaining signed to a staunchly independent label in Matador that allowed them to retain full creative control over their work.

Formed in 1989 in Stockton, California by college drop-outs Stephen Malkmus and Scott ‘Spiral Stairs’ Kannberg, later expanding to a five-piece with the addition of Mark Ibold, Bob Nastanovich and Gary Young, Pavement spent the next ten years as the darlings of the American independent scene. Their lifespan overlapped almost precisely with the entirety of the Nineties, the decade in which almost all of their cultural power and legacy is bound up. In a way, you can see the peaks and troughs, the hits and misses of Pavement’s career as a contemporaneous microcosm of the fortunes of the alternative-rock explosion that hit the mainstream in America in the 1990s. Behind Nirvana and the massive pop-culture juggernaut set in train by Nevermind, it’s possible to regard Pavement as the most important and influential American indie phenomenon of the decade. Some critics, including the ‘Dean of American rock critics’ Robert Christgau, declared them the greatest band of the Nineties.

Belying that imperious status, Pavement actually started out as little more than fun side-project for Malkmus and Kannberg, and even then only after around five years of making noise experiments together. Their debut EP, Slay Tracks: 1933-1969, was recorded at Louder Than You Think studios in Stockton, run by Gary Young who produced and played drums on the tracks. While resolutely lo-fi and in places messy, it showed that Malkmus had very natural songwriting chops alongside a willingness to disregard convention. Released on their own Treble Kicker imprint in late 1989 and with an original run of only 1,000 copies, many of them distributed by fanzines, Slay Tracks… was a product of the healthy DIY underground network that had sprung up throughout America over the previous decade, and it wasn’t long before nationwide indie label Drag City, based in Chicago, snapped them up. Two more EPs, 1990’s Demolition Plot J-7 and 1991’s Perfect Sound Forever, appeared over the next 18 months – all three of these EPs, plus the ‘Summer Babe’ single, were later collected on the Westing (By Musket & Sextant) compilation.

Pavement were soon on the move again, finding a bigger home at the prestigious Matador by 1992, who released their highly anticipated first proper album. Slanted And Enchanted, the pick of a number of sessions and initially released only on cassette, completed a meteoric rise for Pavement from bedroom-based project to the toast of America’s rock press within two-and-a-half years. However, drummer Gary Young’s erratic onstage behaviour, including heavy drinking, impromptu stage-diving and offering fans handfuls of mashed potatoes, was becoming intolerable, and a change in personnel was necessary to take the group to the next level. Swapping Young out for the much more reliable Steve West during a 1993 world tour, Pavement’s critical and commercial stock only increased. Their second consecutive stone-cold masterpiece in a row, 1994’s Crooked Rain, Crooked Rainwas a much more focussed, consistent and less quixotic effort, including many of the group’s most fondly remembered tracks, and has since become a key text for generations of subsequent bands.

1995’s Wowee Zowee saw them take a step sideways, wrongfooting many fans and industry insiders who were expecting an album that would push Pavement to mainstream exposure. Instead, they got a lengthy, eclectic album that dramatically expanded their skewed aesthetic, a word-cloud of ideas and influences that included some of their most idiosyncratic moments. Upon the release of Wowee Zowee, the Pavement aesthetic was firmly established in terms of what people could generally expect from the group – a refusal to sit still creatively for any length of time. 1997’s Brighten The Corners performed yet another volte-face and was, on the face of it, the most accessible effort they ever produced, with the effortlessly melodic ‘Shady Lane’ penetrating the UK Top 40, the band’s first British chart hit.

Although Brighten The Corners was accompanied by a rapturously received world tour, Pavement were beginning to show signs that they were pulling in different directions. 1999’s Terror Twilight consisted in large part of songs that Malkmus had debuted during a brief solo tour the previous year, and ended up being to all intents and purposes his debut solo album. Furthermore, his outright refusal to include any contributions from the other members became a source of tension with Kannberg in particular, the band’s other highly talented writer. It transpired that Terror Twilight was their farewell, a six-month world tour ending amid exhaustion, recriminations and breakdown in communication in late November 1999 with a gig at London’s Brixton Academy. Some members, including Bob Nastanovich and Steve West, were unaware of the split until they read it on the internet. Filmmaker Lance Bangs’ 2002 documentary movie Slow Century, bundling up a 90-minute film charting the band’s career with all their music videos and footage from their penultimate show in Manchester, is essential ownership for any Pavement fan and captures something of the essence of the split.

A brief reunion in 2010, as well as the release of band’s first compilation, Quarantine The Past, demonstrated that there may be some kind of future for Pavement. Stephen Malkmus then confirmed in June 2019, approaching the 20th anniversary of their disintegration, that the group would get back together once again to headline the Primavera festivals in Spain and Portugal in 2020.

For the most part, however, each of the band has pursued solo projects ever since the split. In particular, Malkmus has performed with David Berman’s Silver Jews, as well as embarking on his own solo albums and with his long-standing band, The Jicks, who’ve now released more LPs than Pavement ever did. Scott ‘Spiral Stairs’ Kannberg formed the acclaimed Preston School Of Industry in the early Noughties.

However, Pavement’s status has never diminished in the past two decades, and their influence on generations of independent artists has been incalculable. Anybody who’s adopted the slacker ethos, any band who’ve cultivated their own reputation and image without the help of the majors, have Stephen Malkmus and co. for blazing that particular trail for them. They may be a product of their time, but their legacy is timeless.

Listen to our Beginner’s Guide to Pavement playlist over at Spotify, and scroll below to check out our whistle-stop guide to their five studio albums.