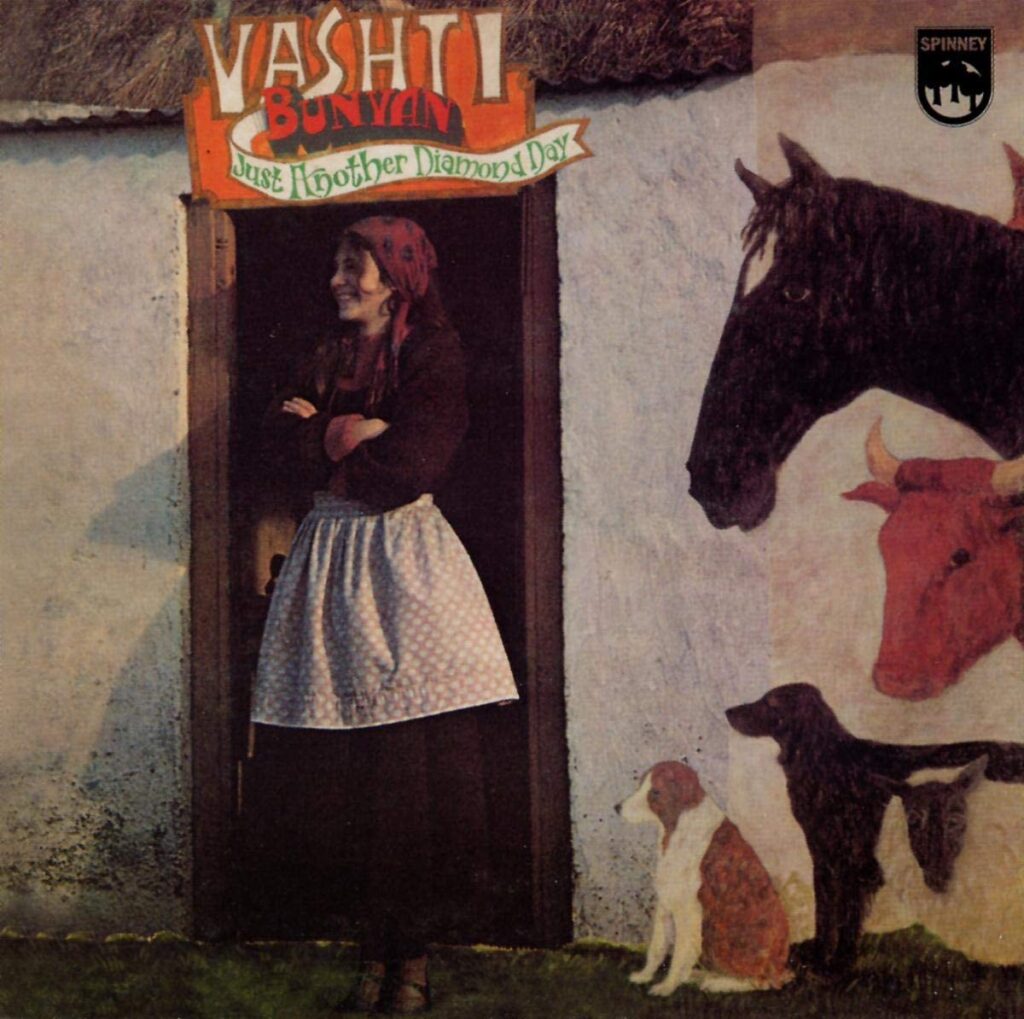 It was the curse of a number of British folk artists that they would go unappreciated in their time, sometimes within their own circles as well as by the mainstream. Nick Drake and Linda Perhacs are perhaps the most well-known of these figures now, but perhaps less well known is the story of Vashti Bunyan, whose cult status within music stems entirely from her 1970 debut album Just Another Diamond Day.

Initially, Bunyan was discovered by the Rolling Stones’ manager Andrew Loog Oldham, and she released her debut single, the Mick Jagger/Keith Richards-penned ‘Some Things Just Stick In Your Mind’ in the summer of 1965. Neither this, nor her self-penned follow-up ‘Train Song’ the following year, caught fire in any meaningful way. After a handful of abandoned sessions, Bunyan decided to travel with her then-boyfriend Robert Lewis by horse and cart to the Scottish Hebrides to join a commune planned by her friend and fellow singer-songwriter Donovan. It was during this trip, which lasted nearly two years, that she wrote the songs that would become her first full-length album, Just Another Diamond Day.

More solemn and stripped-down than her earliest recordings, the songs made such an impression on folk music producer Joe Boyd that he left a standing invitation to Bunyan to record the music with her whenever she concluded her travels. In December 1969, she convened with Boyd and an impressive backing band including musicians from the Incredible String Band and Fairport Convention – two of English folk’s biggest hitters in the Sixties – for an intensive three-day session.

In a salutary lesson about the diminutive role that women held within the music industry back then, Bunyan’s shy nature during the sessions arguably led her losing control of the arrangements, resulting in a mix she felt wasn’t concise or clear enough. Some folk fans and historians, however, found that haziness explained precisely the charming effect that Just Another Diamond Day continues to have on listeners even fifty years later.

There is indeed an almost transportive sense of tranquility and wonderment infused throughout every second of the album. Three of its most beautiful tracks are arranged and scored by Robert Kirby, the man responsible for the serene yet dark beauty of Nick Drake’s Five Leaves Left. But where Drake’s masterpiece was overcast and anxious, Bunyan’s album chooses sunlight and freshness. That derives not just from the production, but the album’s travelogue themes as well. Written during her bold, improvised journey across the wildernesses of northern Britain, there’s a great sense of exploration of the country’s psycho-geographic interior, expressed through music that often sounds like it could have been written in 970 C.E. as easily as 1970. That timelessness is achieved by swerving the politics that so often consumed British folk at the time, and the absence of any psychedelically adapted references to medieval times, also prevalent on the scene, means that it has dated extremely well.

Instead, Bunyan focusses on themes of humanity co-existed in perfect harmony with nature in ways that have been true for centuries. The lilting simplicity of lyrics like “Just another field to plough / Just a grain of wheat / Just a sack of seed to sow / And the children eat” on ‘Where I Like To Stand’, and observations of a bird “teaching its young how to fly” on ‘Swallow Song’, plus the use of fiddles, ukuleles and recorders to communicate a bucolic, pastoral atmosphere, underscore this theme. In some moments, like the opener ‘Diamond Day’, Bunyan comes across more like an Anglified, buttoned-down version of Joni Mitchell; in others, like the spry ‘Come Wind Come Rain’ or the lovely ‘Trawlerman’s Song’, she drills down into proper, ancient British folk territory. Even the childlike innocence of ‘Lily Pond’, whose melody directly interpolates that of ‘Twinkle Twinkle Little Star’, works in this context. Joe Boyd’s meticulous production and the feather-touch playing by the musicians means that Bunyan’s voice, beautiful but fragile as a butterfly, is never drowned out by the instrumentation.

Although it wasn’t included on the original tracklisting, any edition you come across today will certainly contain ‘Winter Is Blue’ as a bonus track. Dating all the way back to 1967 and a duet with fellow folk artist Mike Crowther that appeared on the documentary film Tonite Let’s All Make Love In London, it’s the closest thing to a Vashti Bunyan ‘signature song’ there is. The result of a different session, Bunyan’s voice here is smoky, icy and distant, as if coming to you in the form of a memory from long ago.

Released in the final weeks of 1970, almost exactly a full, Just Another Diamond Day passed almost completely under the radar at the time, unknown outside of hardened folk music circles, just like all of her previous efforts. Dismayed and disheartened, as well as being practically unable to promote the record by the need to look after her newborn child, Vashti Bunyan dropped out of the music industry entirely, her name known by few and her music spoken about by even fewer.

However, as the years and decades went by, Just Another Diamond Day gradually became one of the most sought-after folk records of the era, with copies from its tiny pressing regularly fetching four figures. The whimsical lyrical style hugely influenced San Francisco’s freak folk movement around the turn of the millennium, spearheaded by artists like Joanna Newsom and Devendra Banhart, and the childlike beauty of the music itself clearly influenced the first iteration of Animal Collective. Closer to Britain, bands like Idlewild and artists such as Laura Marling and This Is The Kit’s Kate Stables picked up influences from the album too.

All of this was completely unbeknown to Bunyan, who spent three decades largely preoccupied with raising her family. Around the turn of the millennium, artists who cited her as an influence began to approach her to collaborate on material, leading to a huge upsurge in demand for performances. In 2005, FatCat released her second studio album Lookaftering, featuring many of said artists and produced by composer Max Richter. Bunyan proceeded to work on a number projects in collaboration with others, and was the subject of Kieran Evans’ 2008 feature documentary From Here To Before. In 2014, she announced her third and final album Heartleap, released an incredible 44 years after her debut and capping one of the most unlikely career resurrections in British music history. Both of her newer records were incredibly warmly received, sharing many of the same warm, intimate qualities of Just Another Diamond Day. But to hear why so many cite Vashti Bunyan as an influence in 2020, you do need to listen to that myth-establishing debut.

Listen to Just Another Diamond Day by Vashti Bunyan here via Spotify, and tell us what you think below!