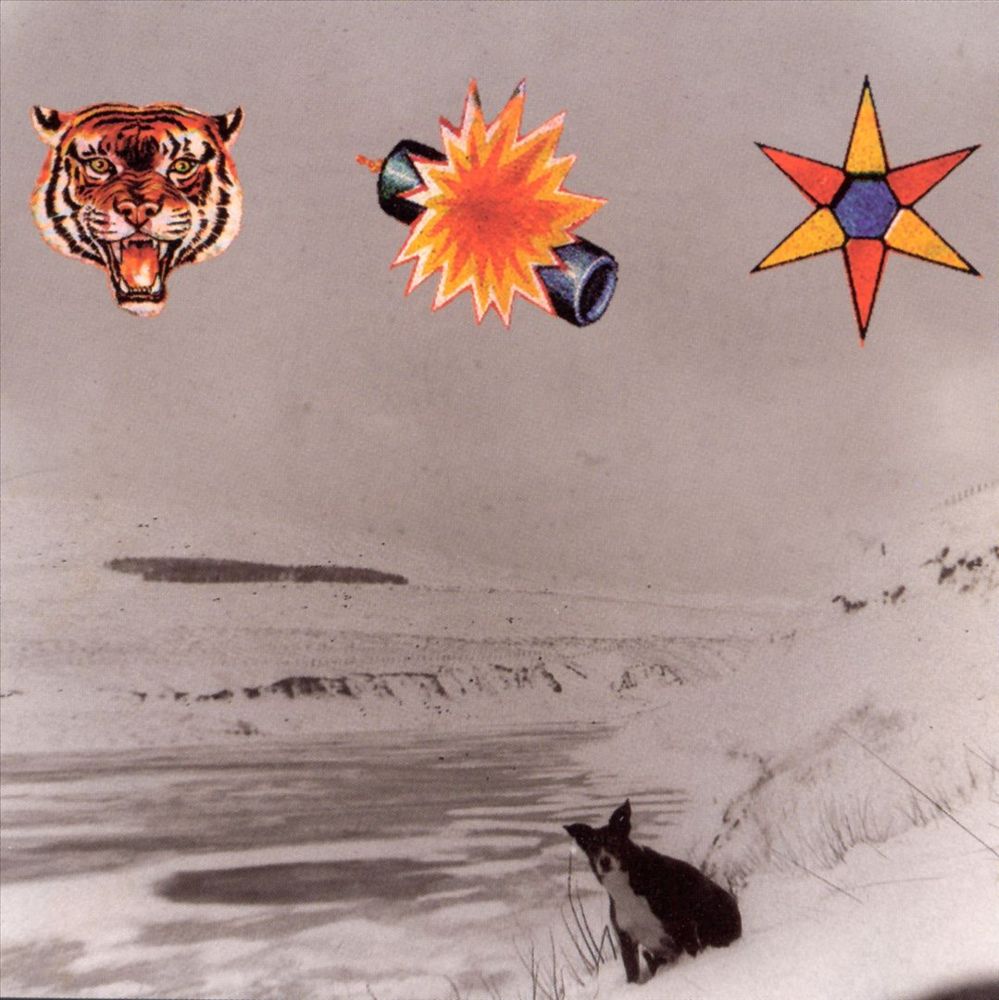 When it comes to the brilliant nearly-men artists of the Nineties, few come to mind as irresistibly as The Beta Band. Emerging in the second half in the decade in the context of an increasingly creatively stale Britpop scene, this Scottish four-piece, boasting a DJ/turntablist built into their regular rock-band set-up and blending folk and indie with all manner of eclectic influences ranging from Latin funk to ambient electronica, were so far ahead of the curve that the music industry simply didn’t know what to make of them, or how to market them. A combination of no luck and sheer bad timing of their career arc meant that The Beta Band called it a day by 2004, but the impression they left on those who listened was profound, and is still being felt now.

Having been re-mastered and re-issued on vinyl to mark its 20th anniversary, their critically beloved 1998 compilation The Three EPs is as striking, original and relevant as ever in 2018’s British indie scene. As its perfunctory title suggests, it was a prelude to their studio albums, collecting their three, highly limited extended play releases – July 1997’s Champion Versions, March 1998’s The Patty Patty Sound and July 1998’s Los Amigos Del Beta Bandidos – that collectively just about fitted on to one CD at over 78 minutes. Together, they represented a creative supernova, managing to be hugely diverse without ever coming across as calculated, bundling up influences from krautrock, hip-hop, ‘70s soul and funk, ambient and lounge music and even the Canterbury folk scene into something utterly ingenious.

Formed in 1996 in the Scottish town of St. Andrews around musician and songwriters Steve Mason and Gordon Anderson, The Beta Band’s first rough recordings garnered them considerable attention in independent circles very quickly. Adding drummer Robin Jones and sampler/DJ John Maclean to form a four-piece as they began making their first EP, the quartet was snapped up to re-launched Parlophone imprint Regal Records in early 1997. However, Anderson was forced to quit the band soon afterwards because of mental ill-health, but The Beta Band soldiered on, replacing him with Englishman Richard Greentree on bass, and hit the studio to deliver on the hype that had already begun to surround them.

For many fans and admirers of their consistently fine work, it’s the first track of their very first release that remains The Beta Band’s greatest single moment. ‘Dry The Rain’, which opened their debut EP Champion Versions in July 1997, was one of the few of the band’s songs in which the departed Gordon Anderson can be clearly detected. Inspired by a fever dream that Steve Mason had while recovering from flu, he and Anderson unfurl the song from a stoned, loping folk groove into a sun-kissed hymn to positivity in the face of adversity. ‘Dry The Rain’ achieves the unusual balance of sounding both spiritually depressed yet unmistakably optimistic at the same time, as the breezy horns of its second half blow away the grey clouds and despondency of the first. Its later use in a memorable scene from 2000 movie High Fidelity seared the song onto the consciousness of millions, but unfortunately ‘Dry The Rain’ came to act as a bit of an albatross for The Beta Band, in terms of the expectations projected onto them versus the constant musical evolution the group themselves wished to undertake.

After that mercurial moment, The Three EPs keeps the listener constantly on their toes, shifting in sound and inspiration with virtually every song in a collection that makes a virtue out of inconsistency and thematic confusion. The warm, fat, funky rhythms and turtle-speed tempos underpinning the ambience of instrumentals ‘I Know’ and ‘B + A’, and the lovely Anderson composition ‘Dogs Got A Bone’ finish out the first EP’s worth of material.

Everything else on The Three EPs, and by The Beta Band subsequently, was written without Anderson’s unique songcrafting abilities. He has since recorded under the monikers of Lone Pigeon and latterly as frontman of The Aliens, a post-Beta Band project with John Maclean and Robin Jones, and the high quality of his output has always represented an interesting thought experiment for fans of the group as to what other creative heights The Beta Band might have hit if Anderson had not left, notwithstanding the fearsome reputation their all-too-brief canon already has.

Despite lasting for nearly 38 minutes, second release The Patty Patty Sound still somehow counted as an EP, and finds The Beta Band at their most sprawling. Although spreading their creativity so widely comes at the expense of quality at times, it’s certainly fascinating. The lysergic blues and grooving rhythm of ‘Inner Meet Me’ is a real treat, a dream-like reverie providing a space of inward contemplation for the listener. ‘The House Song’ is bizarre, beginning with what seems like an a-cappella vocal round before combining a regular house thump with an ill-advised rap segment before ending up in funk instrumental territory. The gigantic 16-minute instrumental patchwork of ‘Monolith’, reminiscent of The Beatles’ infamous sound collage ‘Revolution 9’, is confusing more than anything else.

However, any frustrations are redeemed with the stupendously graceful ‘She’s The One’, which uses every second of its eight minutes economically, opening up from a shuffling, introverted love song into a heavenly, ringing guitar coda that manages to be cute and deeply moving at the same time. Steve Mason’s chronically down-sounding vocals, which are often muttered as opposed to being actually sung, contrast beautifully with The Beta Band’s arrangements when they reach full flight.

If The Patty Patty Sound was their most interesting, The Beta Band’s final EP was probably their most coherent and clipped. Opting for a gentler, sparser sound in comparison to the ideas-Tetris of their previous efforts, Los Amigos Del Beta Bandidos is clean and at least semi-conventional in its approach to structure. The brooding, keening electronica of the dreamlike ‘Push It Out’ makes interesting use of the band’s vocal abilities, as does the piano-based choral ‘Dr. Baker’, despite chucking in weird instruments to clash with the overarching mood. Mason’s misery on break-up song ‘It’s Over’ sounds utterly cosmic and yet quite funny, the jazzy, double-bass-plucked bassline shooting it through with irony. The closing ‘Needles In My Eyes’ is another Beta Band treat, a delicate and winsome piece of psychedelic pop.

While The Beta Band never achieved the success they deserved during their all-too-short life, the impact they had on fellow artists was huge, with The Three EPs representing a throwing-down of the gauntlet to everybody else in British music to do better. The fact that both Radiohead and Oasis, the two biggest British bands of the Nineties but whose aesthetic and outlook couldn’t be more opposed, separately expressed a wish to ‘make a Beta Band record’ at the end of the decade is testament to their effect. You can hear it in the mash-up pop of Everything Everything and Django Django, who also crowbar ideas into small spaces while remaining accessible, the sample-delia of The Avalanches, the brooding indie of Doves, the psychedelic splatter of The Coral, and the all-out fun of brand new bands like Boy Azooga.

The Beta Band themselves released three compelling studio albums subsequently, but none of them quite attracted the same admiration as their work during the 12-month period that produced The Three EPs did. The group even denounced their debut album proper, 1999’s The Beta Band, before it was even released, described it as “fucking awful” and criticising Regal for not allowing them time to work on the material properly and rush-releasing it.

Despite its underperformance, they landed a high-profile support slot on Radiohead’s 2001 tour just before the release of Hot Shots II, a much more concise and focussed effort. Its brilliant lead single ‘Squares’ would surely have been their much-sought commercial breakthrough if not for the sample it was based upon (a string segment from the Günter Kallmann Choir’s 1970 version of Wallace Collection’s ‘Daydream’) being used in another big radio hit around the same time (I-Monster’s ‘Daydream In Blue’), leading The Beta Band to blink first and issue another single instead. Clashes with their label led to significant delays in the creation of their final album, 2004’s Heroes To Zeros, before, demoralised, the group announced its disbandment later that year.

Despite the sterling reputation of virtually the entire of their output, almost all of The Beta Band’s legacy seems to rest with The Three EPs, one of the most original and beloved creations of its era, a handy collection of three snapshots of a band evolving at a frightening pace. Even in its lesser moments – and it undoubtedly has them – eclecticism has rarely been as electrifying.

Listen to The Three EPs by The Beta Band here via Spotify, and tell us what you think below!