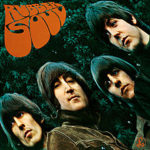 1965 proved to be the making of The Beatles as a long-term artistic force. In an era where careers could be over within months, never mind years, the band had enjoyed a dazzling run of creativity and bagged a shedload of hit singles in the first three years of their career, but by 1965 were at risk of being outflanked by newcomers. The Who and The Rolling Stones had produced razor-sharp singles that made some of the Fab Four’s early hits seem extremely tame by comparison. However, they were not prepared to be driven into the creative dead-end of Vegas residencies just yet, and their sixth album Rubber Soul, following just four short months after Help!, sought to revolutionise the concept of the long-playing record by making a full-length, 40-minute artistic statement.

Inspired by the group’s two major influences at the time, Bob Dylan and The Byrds (who between them had introduced the Fab Four to marijuana and LSD, the two substances that fuelled its creation), plus the harmonies of the Beach Boys and the rhythms of African-American soul singles, Rubber Soul represents a massive leap forwards in The Beatles’ development to that point, both in terms of sound but also songwriting. Dylan had broken new ground with the album format during 1965, producing two masterpieces in the shape of Bringing It All Back Home and Highway 61 Revisited, and Lennon and McCartney, operating increasingly independently rather than in tandem, wanted to try to match him.

However, perhaps more than any other Beatles record, Rubber Soul is Lennon’s album. All of the record’s many stand-out moments are his songs, which demonstrate just how rapidly he was evolving as a writer at this point in time. ‘Norwegian Wood (This Bird Has Flown)’, ‘Nowhere Man’, ‘Girl’ and ‘In My Life’ qualify as some of the most adventurous songs The Beatles had constructed by 1965. McCartney’s contributions, by contrast, are all perfectly competent and expertly executed but are curiously safe, and he wouldn’t join Lennon on the next level until 1966’s Revolver, on which they both dazzled spectacularly. Even George Harrison’s ‘Wait’ and ‘Think For Yourself’ display considerable signs of progress, and place him as the second most important engine driving the group forwards here.

Although A Hard Day’s Night had been the first album to contain entirely self-composed material, Rubber Soul began a concerted run of records to eschew cover versions altogether that would last for the rest of their career (which depends if you count the fragment of ‘Maggie Mae’ on Let It Be). More importantly, it was the first Beatles record to be entirely the product of one continuous recording session in the same place – hitherto, they had recorded on the road whenever touring schedules would allow for a quick breather. Thus, Rubber Soul is the exact point at which they truly became studio-based artists and stopped being a performance-based outfit. The fact that they couldn’t hear themselves on stage over the screams of their fans, meaning that performing their increasingly complex songs was becoming extremely difficult, made this transition a natural one.

Indeed, it’s hard to envisage many of these songs actually being performed live, in the context of Beatlemania. Perhaps that’s just because we’re so accustomed to hearing these songs in this order precisely because they were rarely played, but they seem to make much more sense on record. The delicate ‘Norwegian Wood’, doused in symbolism with its sitar motif and elliptical lyrics which became a key building block in raga rock and psychedelia, for example, could never have been communicated effectively. Nor could the complex three-part harmonies of Lennon’s self-analytical ‘Nowhere Man’ – they couldn’t possibly have heard each other in the days before front-of-stage floor monitors.

Thematically, Rubber Soul had another seismic impact on music, as it saw the kings of pop move away from teen pop and ventures into uncharted territory for rock music. The dreamy disconnection of ‘Girl’ and the aforementioned ‘Nowhere Man’ saw a level of introspection that was almost completely foreign to popular music at this point. McCartney’s ingenious use of a fuzzbox to create a ‘second bassline’ on ‘Think For Yourself’, a mind-expanding consciousness trip penned by Harrison, demonstrated their increasing willingness to use the studio as an instrument – a process that would be fulfilled on Sgt. Pepper’s… 18 months later. Harrison shone once more on ‘If I Needed Someone’ with his chiming, country rock riff. ‘In My Life’, one of the most perfectly realised Beatles tracks, saw Lennon write about his childhood in a distinctly McCartney-esque way, and besting him in the process. The relationship paranoia of ‘You Won’t See Me’, which lumbers imperiously on Starr’s hypnotic drumming patterns, was the longest Beatles track to date at a whopping 3:22!

Even when the group aren’t being brilliant on Rubber Soul, when they’re not flooring it on the open road towards a glorious future for guitar music, the tracks are never less than highly entertaining. ‘The Word’ and ‘I’m Looking Through You’ were nothing that The Beatles hadn’t explored many times before, but were still infectious and memorable; Harrison’s tone pedal guitar echoing throughout ‘Wait’ was the highlight in an otherwise disposable piece. The obligatory ‘Ringo song’ ‘What Goes On’ was a lightweight piece of country and western that dated all the way back to the group’s days as The Quarrymen. McCartney’s ‘Michelle’, with its finger-picking style and European feel, won Song of the Year at the 1967 Grammys. ‘Run For Your Life’ ends things on a distinctly unsettling note, with Lennon’s menacing lyrics aimed at a girlfriend he suspects of infidelity bordering on psychopathic. Despite its incredible riff, he would later disown the track.

Barely three years into their career, and they had gone from the mass production of boy-meets-girl pop songs to sculpting and finessing these pocket masterpieces. Indeed, it’s the tiny moments of attention to detail that really make Rubber Soul stand out – Lennon’s noisy exhalations on the chorus of ‘Girl’, the distorted ‘harpsichord’ piano flourish on ‘In My Life’, for example. Along with the aforementioned works of Dylan, Rubber Soul raised the bar for every other group out there in 1965, demonstrating that the album format could be a blank canvas for imagination and creativity, not just a commercial vehicle. Brian Wilson was certainly taking heed, and was prompted to record the Beach Boys’ masterpiece Pet Sounds the following year in response to it. Suddenly, the concept of the ‘great album’ was born, with several of the most famous LPs of all time being produced in a spirit of friendly rivalry throughout the rest of the ‘60s.

Influenced by: Bob Dylan, The Byrds, The Beach Boys

Influenced: Um… everybody who’s ever picked up a guitar

Tell us what you think below!