REVIEW: Julia Holter – ‘Have You In My Wilderness’ (Domino) 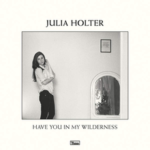 Front cover of ‘Have You In My Wilderness’

Released way back in September, Julia Holter’s fourth studio album has been merited as one of the most significant albums of 2015. While the L.A. musician may not have received much commercial attention from her three previous records, Holter is an artist who is continually shapeshifting through different soundscapes. Have You In My Wilderness sees Holter take on a seasonal soundscape; highlighting the light and dark between autumn and winter. In the past four years, Holter has experimented with various experimental soundscapes. Within the time, she has collaborated with electro-pop act Nite Jewel and psych-folk cult figure Linda Perhacs.

Have You In My Wilderness is an immersive listen and builds on Holter’s use of poetic structure and isolation, which thematically ties in her previous records. Rooted in a classical background, the breadth of this record and its references are immense. The layers of sound create a dream-like, disorientating state which perfectly aligns with Holter’s literary subjects.

Jumping from a Kate Bush and Enya combination on ‘Silhouette’, the listener explores of myriad of reference points including Talk Talk, Bert Jansch and the spatial, electronically-realised wilderness of mid-‘00s Björk. There’s a distinct elegance about the album and is perfectly complimented by elements of brightness and darkness. The unconventional structure of ‘Silhouette’ is a prime example of Holter’s distinctive style. The swooping vocals combine with a subdued string section and syncopated drum rhythm. However, there’s warmness to her discomforting vocal style.

‘Vasquez’ meanders through instrumental arrangements and hazy vocals. Holter is economic with her arrangements and manages to create spatial tension with a jazz-infused bass section and a prominent avant-garde sound. The track faintly recalls French duo Air and their easy-listening monolith Moon Safari before whistling off into dream-like haze. The ambient styles of ‘Betsy On The Roof’ and ‘Lucette Stranded On The Island’ explores similar soundscapes with a diversion towards a cinematic approach.

The result of this body of work is an exceptional listen with a plethora of unconventional pop tracks from an artist who has certainly left her mark. In comparison to her previous albums Have You In My Wilderness reigns in the avant-garde, experimental urge with a powerfully crafted narrative. A certainty for critics’ choice for 2015’s end of year lists. (9/10)

Listen to Have You In My Wilderness here, and tell us what you think below!

Tags: album, Domino, Have You In My Wilderness, Julia Holter, Matthew Langham, review