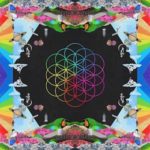 Front cover of ‘A Head Full Of Dreams’

A Head Full Of Dreams arrives a mere 18 months after Coldplay’s last effort, no time at all in the grand scheme of major label acts’ recording, release and touring schedules. Posited as the yang to Ghost Stories’ yin, the bright, optimistic dawn of a new day following the dark night of the soul of its heartbroken predecessor, it’s also rumoured to be the band’s final album, completing a cycle of themes that Chris Martin had noticed during the writing process. Much has been made of the number and nature of the record’s guest stars, ranging from Noel Gallagher, Jay-Z and Beyonce to Martin’s family members. His children Apple and Moses, plus his new girlfriend Annabelle Wallis and, despite their conscious uncoupling, ex-wife Gwyneth Paltrow, all provide vocals. The conscious, studied ‘one big happy family’ harmoniousness of the whole thing will certainly alienate some, but somehow it seems fitting.

Their detractors (and there are many) have long dismissed them as middle of the road, but the truth is that Coldplay is a broad church, attracting fans of many different kinds of music even if those followers don’t give themselves over wholeheartedly, and they’re probably the only group on the planet that could even attempt an album like A Head Full Of Dreams, or headline a Super Bowl halftime show playing new material.

It’s worth remembering Coldplay have spanned the end of the CD age to the beginning of streaming, shifting 80 million copies and remaining consistently massive despite the changing landscape. They’ve subtly tweaked and refined their sound at various points to keep up, but their core message of embracing hope and joy, best put across when the listener is part of a communal experience, in big crowds rather than alone, has always been the same. So it seems fitting that Coldplay try to pull out all the stops on what could be their last record, the full stop to probably the most successful career arc for a British band since Oasis, and the large and varied cast of guest stars seems to feed back into this vision. However, where Ghost Stories was laudable attempt to get back to basics, A Head Full Of Dreams all too often fits into the gaudy, generic stadium-indie of Mylo Xyloto, one of the blandest artistic statements ever made by a major label act with guitars.

With Top 40 producers Stargate at the helm, we’re straight into the realm of bland, synthesised self-affirmation on the opening title track, which actually sees Martin come out with the line “be what you want to be”. The Hallmark greeting card lyrics are, thankfully, used quite sparsely throughout, largely because of Martin’s increasing commitment to transcending lyrics altogether, focussing on pure melody and translating the message through the universal medium of music. He told the Wall Street Journal “you can’t translate the melody into words”, and in many places those melodic lines do the heavy lifting all by themselves.

Beyonce makes ‘Hymn For The Weekend’ absolutely her own, but can’t save the quasi-R&B experiment from being entirely predictable as it unfolds, even as the pop histrionics streak like shooting stars across the firmament. The manipulated vocal motif of ‘Army Of One’ makes for interesting listening at first, but goes on for far too long at more than six minutes. ‘Amazing Day’ is entirely soporific in its content and execution, although it nail have the air of finality they’re looking for as it builds and explodes. It’s at times like this you can’t help but marvel at Coldplay, and wonder how much bigger-sounding they could possibly get. Things end on a surprisingly unresolved note on the airless, aimless ‘Up&Up’, which subsumes Noel Gallagher’s contribution completely.

On the other hand, there are a handful of moments of quality, mainly characterised by how understated they are. The low-key motorik rhythms of ‘Birds’, which sees Martin pause for thought amid the relentless optimism for a change of pace and comes to a sudden stop, plugs back into their origins. ‘Fun’, with Swedish chanteuse Tove Lo, and ‘Everglow’, the track featuring Paltrow, channel the same kind of introspection as Ghost Stories but are much more peaceful, with a sense that Martin’s resolving that same heartache rather than analysing it. The neon-tinged disco fever of ‘Adventure Of A Lifetime’, replete with handclaps, positively revels in its own Coldplay-ness and plays the part of the one hit single that will drive the punters in, and is the best single example of where Martin’s head is at right now.

If you were in on the ground floor with Coldplay back in 2000, nothing here will connect with you on a personal level as the understated Parachutes did. It’s more than likely to satisfy their masses of fans who’ve flocked to their stadium events down the years – after all, they’ve never been ones to frighten the horses – but it doesn’t seem to have any loftier ambitions than this. If this is to be Coldplay’s big finale, their streamer-strewn victory lap with fireworks and arena rock encores, then it’s not a particularly memorable one, full of headline-grabbing distraction but little in the way of real substance. (5/10)

Tell us what you think below!