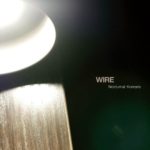 The story of London post-punk cult heroes Wire is one of those where the artist’s influence is way out of whack compared with their actual sales figures. Their 1977 debut Pink Flag was post-punk before punk was even finished with its three-note thrashings, and two feverishly creative albums in 1978’s incredible Chairs Missing and 1979’s almost impenetrable 154 followed before the group disintegrated through creative differences. Despite many reunions, splits and a dozen subsequent albums, it’s this initial splurge of white-hot invention for which Wire will always be best known, and artists from R.E.M., Sonic Youth and Minor Threat to The Cure, Blur and Bloc Party have cited them as a major influence.

Their 15th album Nocturnal Koreans – an odd title inspired by a night spent in a U.S. hotel, apparently – comes from material recorded at the same time as last year’s decent effort Wire. 11 songs from 19 were selected for that, with the remaining eight missing the cut on the grounds that they had been recorded using “trickery” in the studio, according to lead singer Colin Newman. Looking at the tracklisting – eight songs lasting just 26 minutes – such an approach would seem to be flawed, as everything about it suggests an offcuts album, but despite only a shallow level of engagement with the artists in such a short time Noctural Koreans turns out to be an intriguing and mostly successful effort.

The opening title track showcases their desire to maintain forward momentum and create strange, thought-provoking anti-pop, ever the Situationists they were 40 years ago. A soft, cold piece of drive-time pop, like smooth U.S. yacht-rock re-imagined for chilly, pre-dawn driving in Britain, it’s the first of a number of interesting curveballs that, while not always successful, at least stick in the memory. The droning, exploratory ‘Forward Position’, the slow-paced ‘Pilgrim Trade’ and the startling stream-of-consciousness from backing vocalist Graham Lewis on closer ‘Fishes Bones’, muttered just about audibly through a fog of frantic drumming and swathes of guitar, are all rewarding despite being difficult to work with on their surface

Other moments find Wire operating in familiar territory, such as the more conventionally anthemic ‘Still’ and the tight, circling acoustic riff of ‘Internal Exile’, with the deadpan, resigned delivery of lyrics like “an idle glance absorbs the terror / the weight of proof brings little pleasure” recall the spine-tingling moments of their ‘70s glory days. The booming, mechanical post-punk of ‘Numbered’ is a decent introduction to all the values for which Wire have stood over nearly four decades. Newman’s vocals are soft to the point of being indistinguishable at times, but still versatile enough to reach the gloomy depths to make the songs gothic and unsettling when they need to be.

Nocturnal Koreans is therefore something of a hotchpotch of sounds and textures, but one that makes you want to listen to it again straight afterwards, to see what you’ve missed the first time around. It’s rather uneven, perhaps necessarily because of its origins, and is slightly unsatisfying in its brevity, but it comes across as much more than just an afterthought from Wire, and showcases their undiminished and praiseworthy desire to keep moving forwards with their career rather than simply trying to re-create the past, even in their sixties. Long may it continue. (6/10)

Listen to Nocturnal Koreans here, and tell us what you think below!