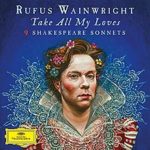 Throughout Rufus Wainwright’s career he has long been able to combine mesmerising piano performances and an emotive vocal that could match many. But for the past decade he has more or less completely immersed himself (barring the oddly out-of-place Out Of The Game in 2012) in the art of classical music – in Take All My Love: 9 Shakespeare Sonnets we see Wainwright take on another expansive step into bringing a new sound to (very) old ideas to varying degrees of success.

It must be said that following the success of 2015’s excellent opera score Prima Donna he has proven himself more than adequate in this work and there are times where Take All My Love matches that; the opening rendition of ‘When I Most Wink (Sonnet 43)’ is a beautifully expansive piece of music which fully allows for the critically acclaimed Anna Prohaska to take full stage with her excellent soprano.

The collaboration between Prohaska and Wainwright works wonders at its best as ‘A Woman’s Face (Sonnet 20)’ shows. The backing of the cello sets the backdrop for Prohaska to again work her undeniable magic and bring poignancy to the work of Shakespeare as she sings of a powerful love (it is debatable as to whether Shakespeare was writing of a homosexual love) as harps and woodwind provide a spring to the track.

However Wainwright does miss a step in ‘Th’Expense Of Spirit In A Waste Of Shame (Sonnet 129)’ as the darker sounds counteract the beauty of the vocal to create a jarring sound, and while this may have been a deliberate tactic this fails to work. It takes Wainwright a second attempt at exploring the more sombre range of Prohaska’s vocal to succeed. Album closer ‘Farewell (Sonnet 87)’ swirls with strings and the delicate, yet bold, vocal of Prohaska is put on highlight as she builds with the music to create an excellent closer for the album.

The story of hits and misses is one which runs throughout the album. ‘When In Disgrace And Fortune And Men’s Eyes’ features an oddly restrained Florence Welch – for someone we are so familiar with bringing a grandiose style to pop she is kept on a leash, with a folk backing. Meanwhile ‘Take All My Love (Sonnet 40) features a weak sounding lead vocal, but is saved by a Gregorian-style backing which sounds vaguely like Steve Barker and Carmen Dave during ‘When The Bells Toll’ (on the credits for Donnie Darko).

However there are certainly moments of excellence on this record. ‘Unperfect Actor (Sonnet 23)’ is Muse-esque in its ability to push the boundaries between the classical and the contemporary. While ‘All Dessun Mϋd’ builds on frantic piano and violins to provide the perfect backdrop for the spoken word of German actor, Jϋrgen Holtz, to sound like Scottish duo Bill Wells and Aidan Moffat.

The amount of stars who appear on Take All My Love is interesting too as William Shatner, Carrie Fisher and Sian Williams all cast their eye of the music and provide a suitable setting usually for the vocalists to take over the rendition and explore Wainwright’s visions fully. But when he takes over the vocals for a reworking of a track from his 2010 album All Days Are Nights: Songs For Lulu ‘A Woman’s Face – a reprise (Sonnet 20)’ we see the most contemporary track on the album as a cross of indie and classical combine to work wonders as we hear an innocence in the vocal of Wainwright as he continues to live his dream.

On the whole, this album is without doubt another great insight into Wainwright’s mind as we see him realise his childhood dreams and at times he does with great success. However there are moments that just miss the mark, and there’s no doubt that this is one of his most ambitious and least accessible projects. Wainwright, in pushing himself, has allowed for others to do the same – there is hopefully more to come from him as he continues to bring opera to a new audience as you get the feeling he is closer to making a seminal record for the masses. (6/10)

Listen to Take All My Loves: 9 Shakespeare Sonnets here, and tell us what you think below!