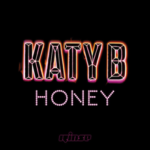 Kathleen Brien, better known by her stage name Katy B, is the definition of an artist with underground qualities becoming overtly mainstream. After collaborations with Benga, Magnetic Man and DJ Zinc she has firmly put forward her mantra for developing well-done pop with excellent production. It is from this idea that her sleek, sophisticated debut album On A Mission was nominated for the Mercury Music Prize in 2011. However with her choice of collaborations gradually becoming more overtly mainstream, Katy’s knack for crafting a unique style of pop perfection has gone with it.

This album is poor, make no mistake about it – with the main issue being that there is a distinct lack of originality everything feels forced to fit with the idea of what is popular, or what has been. Take opening title-track ‘Honey’, this is a track which has tinges of Gorillaz and Balearic dance but ultimately fails because it fails to find its own platform and sense of identity. Lead single ‘Who Am I’ features Major Lazer and Craig David, a collaboration that one would have expected to be great… but it isn’t. There isn’t the defining vocal of Little Red, the accessibility of On A Mission.

The narrative of club life is something which has been a feature of Brien’s work from her outset and is what helped make her name – but it’s no longer substantial enough to build an album around. This album isn’t completely bad: there are some clever production ideas; ‘I Wanna Be’, one of the few tracks with only one collaborative credit, is an example of building a timeless dance track – it doesn’t focus on anything particular, it purely provides a route of escapism. There are other times when this album simply can’t fail. ‘Calm Down’, with production from Four Tet (who may be the most in form producer in the UK) and Floating Points (who continues to make a name for himself for his ability to build subtle layers and take them away to leave a satisfying record), works wonderfully.

The problem of this album, regrettably, is Katy B. Her vocals are bland at best throughout, and in working with other twenty producers for this record’s 53 minutes it feels exceptionally overcrowded. One can only hope for a return to her carefree music of old, bringing a new ideology to pop, because this is uninspiring from the off. (4/10)

Listen to Honey here, and tell us what you think below!