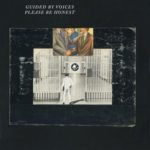 Coming just a couple of months after its lead singer’s last solo album, Please Be Honest is the 23rd by the indie institution / saga that is Guided By Voices. In their 30-year career that’s seen dozens of line-up changes, their Fading Captain Robert Pollard has been the only constant figure on the good ship GBV in a rotating cast of faithful musical fellow-travellers and occasional deckhands. After their initial split in 2004, their first reunion in 2012 spawned six albums of pretty decent quality in just under three years, giving you an idea of their prodigious level of output that makes the group so special, but the band went on hiatus again in late 2014, with Pollard resuming an even more prolific solo career.

However, news arrived of a second reunion early this year. Terrific, fans initially thought, except this wouldn’t really be a reunion at all, because on Please Be Honest Pollard wrote every song by himself, played all the instruments you hear on them, and mixed and produced it. That means: no Tobin Sprout, his virtually ever-present co-songwriter in GBV down the years who has always counter-balanced his bizarre imagery with something more grounded; no Doug Gillard, his comrade-in-arms in GBV’s later years whose technical flashiness had made them slightly more appealing; not even anybody who has helped him make his myriad solo albums.

Impressive though that undoubtedly is, quite how it constitutes a group effort is bizarre, and the first thing to note about it is how unpolished Please Be Honest sounds. GBV have never been about musicianship and have often worn their lo-fi credentials with pride, but they haven’t sounded this unfinished since their very earliest output dating back to the mid ‘80s. Pollard is a kind of spiritual godfather for bedroom artists, recording idiosyncratic lo-fi material beholden to nobody except themselves, and modern troubadours like Alex G and Mac DeMarco owe him a debt of sorts. Here, it seems as if he’s explicitly trying to re-capture that essence with his approach.

On occasion, it works, such as on the crunchy power-pop of opener ‘My Zodiac Companion’ or the breezy, drum machine-directed ‘Kid On A Ladder’. The typically Pollardian title ‘Glittering Parliaments’ also contains flashes of GBV’s trademark ‘impromptu’ brilliance, as if he’s just come up with the idea for the song right there and then, exploring it for a few lingering minutes before disposing of it forever. But these moments are outnumbered by tracks that, if they’re not merely anonymous (‘The Caterpillar Workforce’, ‘Come On Mr. Christian’), are dirge-like and aimless. The chugging ‘The Grasshopper Eaters’ and the prog-like ‘Hotel X (Big Soap)’ are the most notable of these.

The final three tracks do something to rescue the package – the proto-Strokes of ‘Unfinished Business’, the sparse, semi-folky ‘Defeatist’s Lament’ and the oddly touching ‘Eye Shop Heaven’ being the kind of things Pollard has dealt in for years, but they can’t quite shake off the feeling that a lot of the material here could have been thought through and finessed. Pollard must of course get credit for continuing to push himself to create new, original material this late into his career, particularly as it would be so tempting to coin it in and tour some of GBV’s mid-‘90s career peak albums to his legions of fans. But this is one of his least consistent efforts for many years, and particularly disappointing next to the artistic success of his very recent solo album Of Course You Are. When the fantastic title track rolls around two thirds of the way through, it only serves to highlight what virtually all the rest of the album lacks.

Furthermore, the status of Please Be Honest as a ‘Guided By Voices album’ seems mystifying and somewhat arbitrary given that it features only Pollard himself, and, after repeated listens, may as well be just another solo record given the entire absence of tangible differences with his own recent output. Despite a small handful of highlights (I mean, come on, this is Robert Pollard we’re talking about), this is simply a rather uninspired and unnecessary addition to a brilliant catalogue. (4/10)

Listen to Please Be Honest here, and tell us what you think below!