REVIEW: Robert Pollard – ‘Of Course You Are’ (Fire) 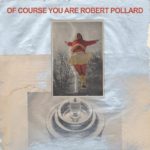 To describe Robert Pollard’s output rate as ‘prodigious’ would be the greatest understatement in music. As the lead singer of the obscurantist indie heroes Guided By Voices since the mid ‘80s and latterly as a solo artist, Pollard has more than 1,700 songs registered under his name with various performing rights organisations. Of Course You Are is his 22nd solo album since 1996, indicating a man who truly feels compelled to be in a studio, obsessively crafting songs from interlocking compounds of pop, psych, prog and punk, dumping them on record and moving on to the next idea. For such an approach, the level of quality control is unusually high, and this reinforces that impression yet again.

Announcing his intention to revive GBV yet again this summer, but this time with none of the ‘classic line-up’ from recent reformations, instead picking personnel from the band he’s working with here. It seems that Nick Mitchell will be providing the creative foil for Pollard’s writing, occupying the role of musical lieutenant that Tobin Sprout and Doug Gillard variously did with GBV. Judging by what you can hear on Of Course You Are, he’ll do just fine, complimenting Pollard’s song sketches with understated yet melodic musical flourishes. Opener ‘My Daughter Yes She Knows’ is precisely the kind of warm, mature indie that will be instantly familiar to even the most casually acquainted GBV fans, and over the course of 35 minutes we see pretty much every aspect of Pollard’s songwriting.

We get McCartney-esque harmonising on ‘Come And Listen’ and crisp acoustic guitar and ice-cool trumpets on ‘Little Pigs’, providing the most obviously populist moments here, making you wonder why Pollard and GBV haven’t gotten so much more radio exposure down the years. However, these are counterbalanced by more challenging moments like ‘I Can Illustrate’ and ‘Promo Brunette’. The nagging chanting of ‘Collision Daycare’ is very consciously sixties, and the slight Guns ‘N’ Roses feel of the hurtling ‘Long Live Instant Pandemonium’ shows that Pollard is in no mood to be conservative in terms of his range, even at the age of 58. We even get to hear him indulging his less-explored prog-rock side, with the weird bloopy keyboards of ‘Contemporary Man (He Is Our Age’) and the baroque musical squiggles adorning ‘Losing It’.

In terms of atmosphere, Of Course You Are is as self-contained a little universe as anything else in Pollard’s vast catalogue. Modestly confident and understated as ever, Pollard’s love for the vast tapestry of pop music and his respect for the creative process is re-stated once more. Really, there’s no other conclusion to draw with any Pollard work that you won’t be making in a few months’ time, and have already done on dozens of occasions before. It’s not exceptional, but nothing is ever anything less than totally cool and assured. Maybe the old maxim about the only certainties in life being death and taxes ought to be adapted to include ‘another Robert Pollard record’. (7/10)

Listen to Of Course You Are here, and let us know what you think below!