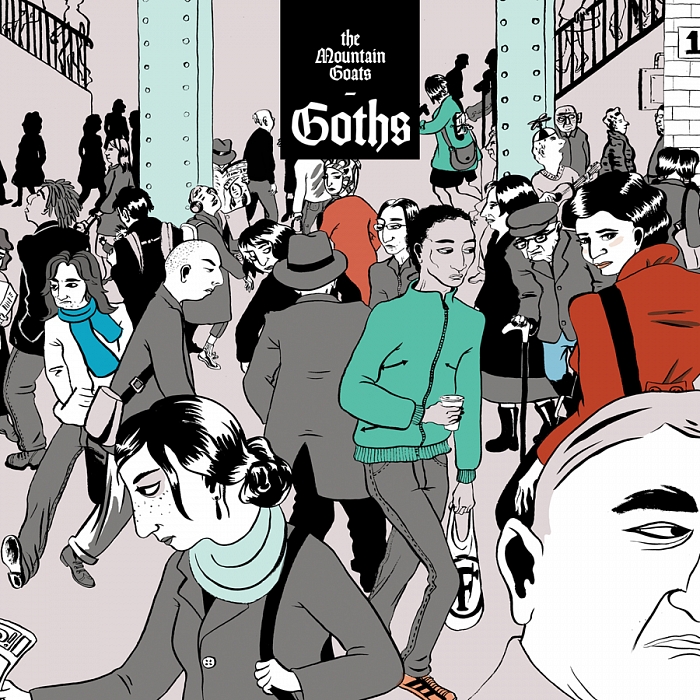 John Darnielle’s 16th album with The Mountain Goats contains a handful of quality highlights but is ultimately a mixed bag.

John Darnielle, the uniquely gifted auteur who sits at the centre of the 25-year career of The Mountain Goats, is one of the most drastically underappreciated talents on the American music scene. Over more than a quarter of a century and, with Goths, sixteen studio albums, Darnielle is responsible for some most characteristic and varied records from that scene. No two are stylistically similar, but all are of a piece with each other, though the production quality of the recordings have generally gotten better since the turn of the millennium. Exceptional talents have served time in the revolving line-up of the group, most notably a certain Annie Clark (a.k.a. St. Vincent).

Even before listening, Goths already seems like it might be an outlier in The Mountain Goats discography, as it is the first not to feature any guitars (excluding bass) at all. Themed around the evolution of goth culture as it emerged via underground and eventually became more of a mainstream dress code, this complete absence of guitar ironically seems to celebrate the scene as well as subtly subvert it. But it’s a hard thing to pay tribute to such a culture without actually using the instrument most used to give expression to it, and the results on Goths are unfortunately mixed, despite the highlights easily being as good as anything else in Darnielle’s past.

Musically, the new album consists of prominent bass lines and percussion parts, heavily reliant upon rhythm and with infusions of jazz and classic songcraft that pre-dates the pop era. Opener ‘Rain In Soho’ has a pallid, Nick Cave-esque complexion to it. ‘We Do It Different On The West Coast’ sees slower, Anglophile tendencies creeping in, while ‘Unicorn Tolerance’ is more like a natural outgrowth of 2015’s Beat The Champ, a typically Darniellian concept album about wrestling.

The references to goth are scattered liberally throughout the record, in Darnielle’s wry, dark and insightful lyrics and in the song titles. ‘Wear Black’ is a very mainstream, romantic piano formation, while the Sisters Of Mercy-citing ‘Andrew Eldritch Is Moving Back To Leeds’ is a jaunty first single with flourishes of organ. The marvellously kitsch closing track ‘Abandoned Flesh’ is a career highlight for this most prolific of writers, celebrating the demised cult goth band Gene Loves Jezebel while observing “Robert Smith is secure in his villa in France”. It shows literacy as well as wit, and shows that Darnielle’s tools are as sharp as ever. ‘Stench Of The Unburied’, a light and breezy track juxtaposed with coal-black subject matter, and the driving rhythm of ‘Shelved’, are other splendid moments.

There’s plenty of lyrical poignancy and emotional clout to Darnielle’s lyrics – one wouldn’t expect anything less after all this time – but musically Goths is a distinctly mixed bag. While it might later seem like an anomaly in The Mountain Goats canon, it is enjoyable enough on its own terms if given time. (6/10) (Ed Biggs)

Listen to Goths here via Spotify, and tell us what you think below!