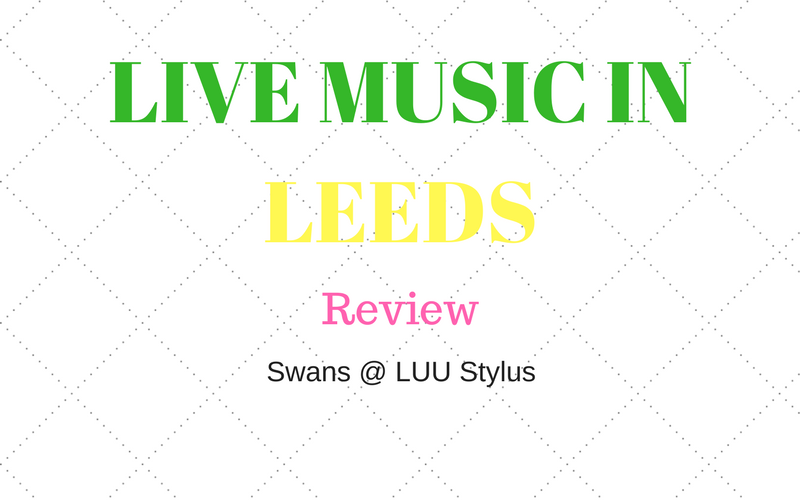 It’s almost impossible to put into words just how incredibly loud and emotionally powerful Michael Gira’s long-standing noise-rock project Swans are in the live arena. Touring the UK for the final time in their current incarnation – i.e., the one that reformed in 2010 and has been responsible for a triptych of epic, two-hour records in 2012’s The Seer, 2014’s To Be Kind and 2016’s The Glowing Man – this represents something of a ‘last chance to see’ for arguably the most creatively fertile and successful period for Swans in their +30 year history.

The rather cramped and angular Stylus at Leeds University Union initially seems a rather unsuitable setting for a band this savagely loud. Indeed, there are signs everywhere in the venue strongly recommending punters to wear earplugs. However, with the noise dialled up to the point where it’s almost physically painful, where you feel your body tingle and where empty plastic pint pots are vibrated to the point where they fall off surfaces because of the sound waves buffeting everything, Stylus weirdly achieves an intimate sense of communion between artist and audience that would have been lost somewhere bigger.

A two-and-a-half hour set consisting of only five songs, two of which were new to this tour, ‘Screen Shot’ in truncated form from To Be Kind, and two tracks from The Glowing Man. Considering these are multi-segmented epics where certain passages are so repetitive as to become utterly mesmeric, it’s incredible that it all seemed to go past in such a blur.

45-minute opener ‘The Knot’, one of the aforementioned new songs, contains several such punishingly loud sections that are held at their point of climax beyond the point of showing off and to the extent that it’s actually impressive that humans can make a sound like this. There are no cheesy drum fills, no wanky soloing, no frills or clichés of any kind, which makes Swans’ music stand totally apart from conventional rock’n’roll despite consisting of the same basic language of guitars, bass, drums and synthesisers. Gira and his incredibly disciplined supporting cast of five musicians subtly develop a simple rhythmical theme and, almost imperceptibly, bring it to boiling point before gently releasing the tension.

At several peak points in these astonishingly noisy tracks, the imposing Gira raises his hands in the air like some possessed demi-god, and seems to get carried away with the music emanating from the band, acting as a kind of conductor to the rest of the musicians as well as serving as a dominating focal point for his own performance art. The noise, however, is not abrasive or superficial, but serves an aesthetic purpose. Recurring themes through Gira’s career – pain, violence, death, mental illness – are present, but the sound seems to act as a vessel for salvation. Swans translate the darker, destructive elements of the human condition into a brutal, unstoppable sonic force that’s capable of redemption as well.

If you get the opportunity to see Swans before this version of the band mutates into its next phase, please take it. If you’re a fan of conventional rock, it’s quite likely you’ll never have seen anything remotely like this before and, very likely, not subsequently either. But wear earplugs, seriously!