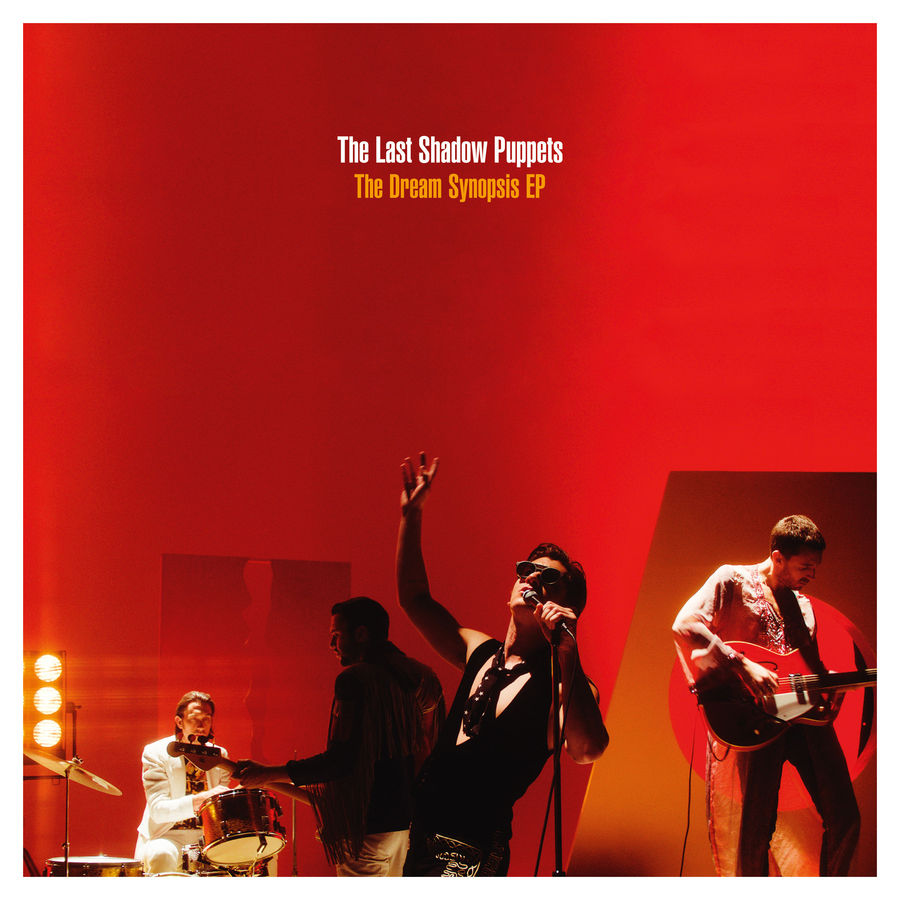 An insightful selection of brilliantly executed cover versions sits nicely alongside live tracks on this excellent companion piece to TLSP’s ‘Everything You’ve Come To Expect’.

A band’s choice of covers can say a lot about them. It’s like when someone asks you what your favourite band is. Do you pretend to be cool and say that it’s some avant-garde, post-punk, new-wave group (that you definitely won’t have heard of)? Or do you be honest and confess your love for Destiny’s Child? Alex Turner and Miles Kane were no doubt faced with a similar conundrum when compiling the track list for The Last Shadow Puppets‘ first ever live record. From a refined and elegant Leonard Cohen tribute, to larking around singing about cacti, the duo have gone for a combination of cool and downright fun. The result is The Dream Synopsis EP, an eclectic selection of covers and re-workings of The Puppets’ own songs. Following the success of April’s Everything You’ve Come To Expect, a world tour and some massive festival slots that rocketed their rock-star status to dizzying heights, another release from the boys so soon was definitely not what we ‘expected’. But we’re sure glad it’s here.

Like the album and many of their live sets, ‘Aviation’ serves as a perfect opening; its smooth riff and grooving bass line setting the dream-like tone for the rest of the EP. Yet what’s most striking from the start, is despite being a live recording and termed a ‘re-working’, it’s remarkably true to the record version. In fact, if it weren’t for Miles’ rather cliché studio talk (“we are rollin’”), and the taps of drumsticks reminding us of their studio presence, you could be forgiven for mistaking it for the original. It’s perhaps only us (obsessive) fans that will notice Alex’s harmonies coming in at a slightly higher pitch, or Miles’ more gritty tone of voice. Although there’s nothing obviously ‘re-worked’, there’s nonetheless a raw, live quality to it, that prevails throughout the rest of the record.

We’re kicked out of our ‘Aviation’-induced daze by the pummelling opening drums of the first of four covers, ‘Les Cactus’ by French singer Jacques Dutronc. It’s undoubtedly the Puppet’s most unusual cover choices, and one that really shouldn’t work. Yet although his linguistic accuracy leaves something to be desired, Alex certainly displays all the charm, attitude and slightly caricatured arrogance of a Frenchman. Despite its absurdity, there’s something endearing about Alex Turner tackling the French language in an audaciously strong Yorkshire drawl, that somehow makes it an enticing listen.

The fun continues with a cover of The Fall’s ‘Totally Wired’. After letting Alex indulge in his French fantasy, this is where Miles comes into his own. Injecting the song with the same pumped-up energy as ‘Bad Habits’, you can almost picture Kane frantically bouncing around stage, making it easy to see why it’s become a regular live favourite. Miles continues the energy and post-punk vibes with a cover of ‘This Is Your Life’. Despite giving it a more dynamic and fast-paced production, The Puppets have still managed to retain the eery undertones of the Glaxo Babies’ 1979 original. Yet compared to the highs and lows of ‘Totally Wired’, the song itself lacks anything for the pair to really work with or make their own, leaving it feeling a little flat. Although that’s really a matter of the Glaxo Babies’ songwriting, it just seems a strange cover choice, especially considering the absence of their much-loved cover of David Bowie’s ‘Moonage Daydream’. Yet in doing so, it perhaps tactfully avoids involvement in the inevitable hype and predictable covers that always follow the death of an artist as big as Bowie. But for fans who are somewhat less concerned with music industry politics, it is an unfortunate omission.

That said, the boys do make room for a tribute to another of this year’s lost legends, in their version of Leonard Cohen’s ‘Is This What You Wanted’. With his passing still so raw, Alex’s crooning carries an added poignancy. It’s also glaringly obvious how much Cohen has influenced Turner, with lines like “you were the father of medicine / I was Mr Clean”, that he could have easily penned himself. Whilst channeling the same delicacy as the original, the Puppets’ now trade-mark orchestral accompaniment makes it their own, and lifts it to a dramatic and monumental climax. Frankly, after having to endure so many awful ‘Hallelujah’ covers over the years, it’s a refreshing and frankly stunning homage to who was surely one of Turner’s biggest idols.

Things then lead nicely into EP closer and title track, ‘The Dream Synopsis’, a nostalgic ode to Turner’s home town, with lines like “you got a leaning tower of pint pots in your hand” showcasing his ability to make poetry of the everyday. This, paired with this version’s addition of a sultry saxophone (as played by Alex’s dad on tour), makes “Sheffield city centre” sound more enticing and romantic than you’d have ever thought possible.

So, what do The Last Shadow Puppets’ choice of covers say about them? Have they made it in with the cool kids? Well, these days, they are the cool kids. They’ll play whatever they want and just have fun. Yet what’s more interesting, is the clear insight it gives into the duo’s influences. From referencing their wild, rock-star idols in the more lively tracks, to paying homage to their lyrical inspirations, The Dream Synopsis covers all musical bases. Although all recorded live, it’s as refined, slick and cinematic as their studio work, serving as another reminder of why Turner and Kane really are the ‘dream’ team. (8/10) (Alice Williams)

Listen to The Dream Synopsis EP here via Spotify, and tell us what you think below!