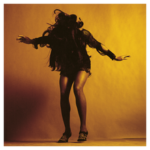 Music’s favourite intense bromance is back after eight long-awaited years. The Last Shadow Puppets’ widely acclaimed 2008 debut album The Age Of The Understatement showcased Miles Kane as an indie rock playboy with his own fan base and Alex Turner’s ability to ditch the smart indie disco hits about teenage life in Sheffield for string-laden ballads and melodramatic ‘60s pop, leaving fans wanting more from the dashing duo. Following a natural break in Arctic Monkeys’ career, their cries have been answered with Everything You’ve Come To Expect, a more relaxed but experimental album taking cues from soul music and The Style Council rather than Scott Walker-esque chamber pop which, in comparison, isn’t quite as consistently successful as its predecessor. That said, the album is never boring, with individual songs providing sheer seductive delight.

Opening track ‘Aviation’ is a masterclass in classic pop seduction, with its’ chord changes unexpected and yet strangely inevitable, backed up by Owen Pallett’s dramatic strings to lure you into the addiction, making it the most immediately satisfying listen on the album. These opening moments of dissonance gives way to a sly guitar riff, providing a cinematic feel to the track; you can almost imagine yourself cruising down an empty sunlight strewn highway with the song on full blast and the wind blowing through your hair. Another personal favourite on the album is ‘Dracula Teeth’, where again, Pallett’s string arrangement gives the track a layer of death, creating a lushly creepy track that you cannot help but sway to; yet it sounds like Monkeys offcuts in orchestral pop clothing (which is maybe why I like it so much). Midway through the album, you stumble upon ‘Used To Be My Girl’ and ‘She Does The Woods’, a double dose of altogether moodier tunes, reminding listeners of Humbug’s darker rhythms.

Placed at the end of the album, ‘The Dream Synopsis’ shows Turner’s anxiety turning towards questioning the entire album, creating a refreshing human vulnerability that we are not used to seeing in rock stars. His characteristically sparkling use of language “you’ve got a leaning tower of pint pots in your hand” offer a romanticised view of reality, showing moments of self-realisation alongside yet more gorgeous string arrangements. But this window of insight is suddenly shut, with the timeless line “it was all a dream”: a phrase often featured at the end of primary school children stories. Overall, there is less attention given to hooks and his trademark gimmericks but the album finds Turner at his most endearing, with each song turning into slow burning seduction. Overall this album isn’t quite what we’ve come to expect from The Last Shadow Puppets – but that’s just how we like it. (7/10)

Listen to Everything You’ve Come To Expect here, and tell us what you think below!