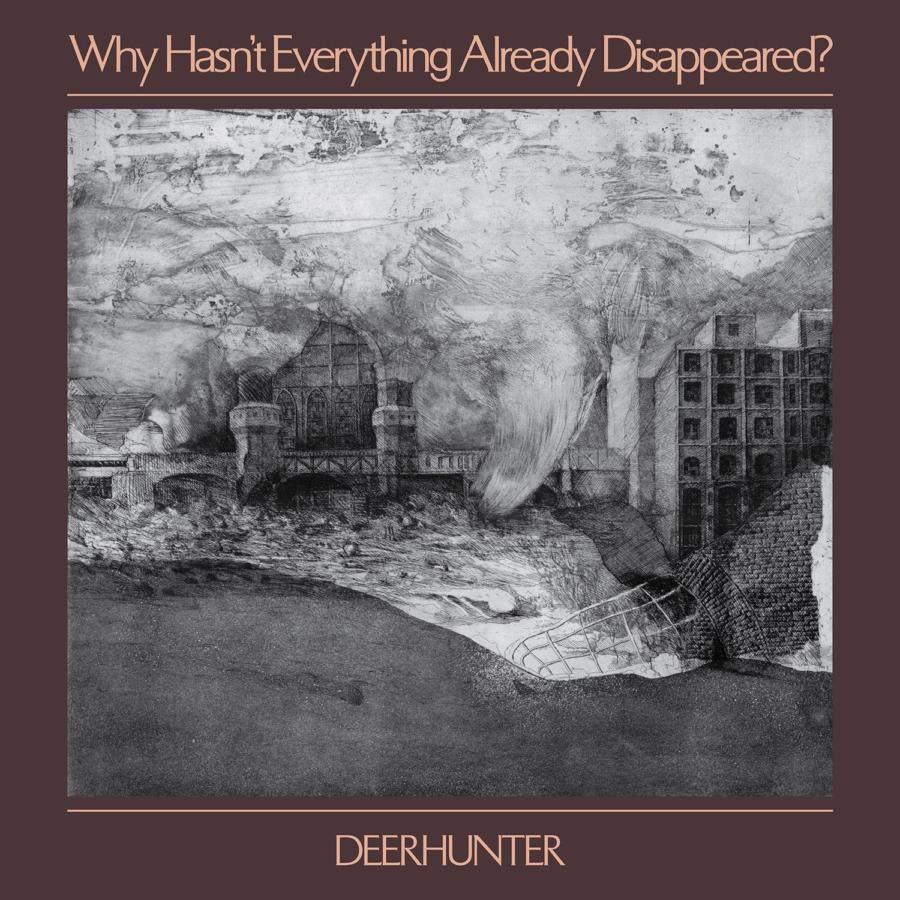 All of the seemingly contradictory elements of ‘Why Hasn’t Everything Already Disappeared?’ add up to yet another strange but fascinating chapter in the history of Deerhunter and Bradford Cox.

In contrast to the deeply personal nature of much of Bradford Cox’s work, Deerhunter’s eighth album, bearing the curious title Why Hasn’t Everything Already Disappeared?, seems concerned with the state of the world around him and the curious late-stage capitalism and divisive populism that currently defines life in the industrialised West. Clocking in at a concise 36 minutes, the album seems to strike a balance between Deerhunter’s twin, polar opposite tendencies, resolving the dreamy yet anxious expansiveness of classics like Halcyon Digest and their last outing, 2015’s Fading Frontier, with the boxed-in aesthetics of an album like Monomania, and all the while continuing the group’s poppier and less overtly nostalgic direction.

The homely, DIY feel of the record may partly be down to the involvement of Welsh artist Cate Le Bon behind the production desk, and it’s reminiscent of her last DRINKS album with White Fences’ Tim Presley (himself a guest here). Drums are muffled and dampened to the point where they sound like they’ve been taken directly from demo tapes, and unlikely combinations of instruments and musical elements rub up against each other in the mix. Happily, this approach suits the quixotic nature of Why Hasn’t Everything Already Disappeared?, which presents itself as an album of contrasts. Not just between previous iterations of Deerhunter, but also in being avant-garde yet strangely accessible; overtly sunny in its sonic disposition, but full of resigned fatalism in lyrical terms.

You could hear that interaction of clashing themes in the teaser single ‘Element’, which manages to be both low-key and melodramatic at the same time. The album itself goes straight into it from the first moment, the breezy harpsichords heralding album opener ‘Death In Midsummer’, showing off Cox’s Anglophilia, juxtaposed with dark sentiments such as “and in time you’ll see your own life fade away”. The hollow xylophone-esque noises and wheezing saxes on the weird interlude ‘Tarnung’ and the delightful instrumental ‘Greenpoint Gothic’ are two more illustrations of the group’s curious approach to this record. It’s difficult to parse at first, only revealing its true nature to you after numerous listens, but nobody could ever accuse Deerhunter of repeating themselves.

Bradford Cox’s forlorn vocals float wraith-like over these crooked, hazy soundscapes, uttering dismayed and apocalyptic observations about the world winding down. The lyrical aspects are almost unremittingly pessimistic, ranging from musings on the doomed James Dean on the otherwise infectious earworm ‘Plains’ to the dark warnings on ‘No One’s Sleeping’, dealing with the murder of British MP Jo Cox in 2016 amid the Brexit referendum.

When not dealing in specifics such as this, Cox dwells on the big questions of life and its meaning. On mid-album sparkler ‘What Happens To People?’, he answers the question with “they quit holding on” and “their dreams turn to dark”. Intoning in a pitched-down electronic voice, he announces on the curious ‘Détournement’ “there will be no sorrow on the other side”, over dreamy washes of synthesisers. On the superficially bright closer ‘Nocturne’, featuring a repeating music-box riff, Cox sounds banged-up and utterly defeated and surmises that there are “no boundaries left to cross”, perhaps dealing with modern pop culture’s tendency to tediously repeat and re-boot itself.

Who knows what Why Hasn’t Everything Already Disappeared? really means, but all of its seemingly contradictory elements add up to yet another strange but fascinating chapter in the history of Deerhunter and Bradford Cox, one of the 21st century’s most inscrutable songwriters. (7/10) (Ed Biggs)

Listen to Why Hasn’t Everything Already Disappeared? by Deerhunter here via Spotify, and tell us what you think below!