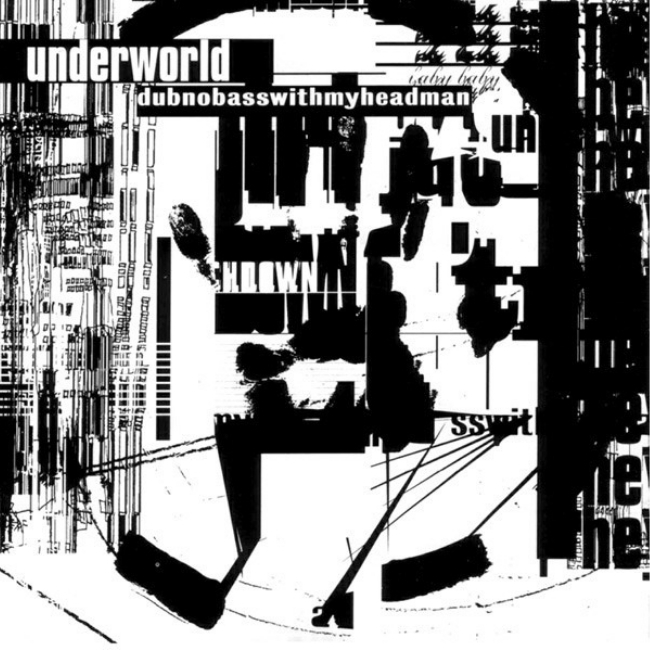 Demonstrating that there was more going on in the British alternative music world than Britpop in 1994, dubnobasswithmyheadman was technically the third studio album by electronica/techno stalwarts Underworld, but was to all intents and purposes another debut. Having released two pretty tepid albums in the late 1980s as a duo before effectively being mothballed for nearly half a decade, this reinvention of Underworld saw Karl Hyde and Rick Smith add the mercurial Darren Emerson, then just 22 years old, to their line-up. It gave them a new lease of creative life, elevating them from obscurity into the company of other British dance luminaries of the Nineties, such as The Chemical Brothers, Orbital, The Prodigy and Leftfield.

dubnobasswithmyheadman featured a combination of booming big beat and smooth, catchy techno hooks and topped off with stream-of-consciousness vocals, courtesy of Karl Hyde’s inimitable Essex lunacy that gave the whole package a key aspect of rock performance artistry. With the energy of fellow Essex ravers The Prodigy but also the dark strangeness of more chilled-out acts like Massive Attack, it sounded esoteric and strange yet totally authentic and streetwise.

As opposed to the rather forced synthpop sound that the first incarnation of Underworld had adopted, the Mk.II version of the band adopted a very fluid, anything-goes approach to writing, embracing techno and progressive house and putting a peculiarly English twist on them. As Karl Hyde told explained at the time:

“We’re grabbing elements from all different times and areas of music and taking them somewhere else. We don’t want to simply regurgitate the past, and even though we’re using vocals and guitars, we’re trying to do it in new ways. We’re trying to find ways which makes those elements relevant to today. By not following a blueprint, we’re able to base a song on acoustic guitar, or we can do a pure techno track, based on an oscillator. In the past, Rick and I have often been excited by a poem or a film or something and thought, ‘That’s inspired us to do a great reggae tune but we can’t because we’re not in a reggae band’. Now we would think, ‘Fuck yes, let’s do it’. There’s a lot of cutting and pasting, especially with the vocals. Something which is recorded for one track one day may well end up on three different tracks a few months down the line. Nothing is fixed. They’re just points for us to jump off of.”

Take ‘Rez’, for example, a 12” stand-alone single released the year before dubnobasswithmyheadman and which gave Underworld their second chance to make a first impression on the public. Built on an elongated loop of instrumental bleeps and chugging, swirling beats that gradually swells and recedes, taking a full two-and-a-half minutes to drop, it was an impressive exercise in dynamics that worked just as well in living rooms and chill-out rooms as dancefloors and parties. Often mixed in with ‘Cowgirl’ live (more of which later), ‘Rez’ became one of Underworld’s biggest audience favourites.

Underworld took those principles into the album itself, when it arrived at the end of January 1994. The opening duo of ‘Dark And Long’ and ‘Mmm… Skyscraper I Love You’ are the best examples of their vision. The former is desolate and disturbed, whose atmospherics are grimy and low-lit and set the tone for much of the album, the latter an epic, gently thrilling soundscape that collapses into a guitar-led coda amid Karl Hyde’s bizarre vocals about “porn dogs sniffing the wind” and “I hear God on the phone”. Where most British dance music of the time attempted to evoke glamour, dubnobasswithmyheadman went in another, altogether darker direction. Instead of the dancefloor, Underworld’s music was for the cold streets outside the clubs, for the edginess and loneliness of late-night public transport.

‘Spoonman’ is a tightly wound, almost hypnotic number. ‘Dirty Epic’ is a warm, fidgety delight, replete with Hyde’s unique lyrical non-sequiturs (“here comes Christ on crutches”). It blends into album highlight ‘Cowgirl’, its house-based rhythm built around several of Hyde’s vocals and an unstoppable juggernaut beat. The moody ‘River Of Bass’ and instrumental track ‘Tongue’, with its blissful guitar lick, are seemingly built in for relief and variation from the deep, exploratory nature of the rest of the tracks, most of which are nearly ten minutes in length. Final track ‘M.E.’ has a more straightforward pop hook that wouldn’t sound out of place on an early Chemical Brothers album.

The striking, heavily stylized artwork for dubnobasswithmyheadman, designed by the Tomato art design collective of which Hyde and Smith were members and which was responsible for many cutting-edge art installations and artwork for television and print advertising, was also impactful. A mixture of the regimented and the chaotic, it was the perfect visual accompaniment to the album itself and its collision of genres, and provided a template for other acts in the Nineties that wanted to purvey electronic music made with a human pulse.

As a trio, Underworld unexpectedly gained worldwide fame a couple of years later with the brilliantly bizarre ‘Born Slippy .NUXX’ as a result of its inclusion on the Trainspotting film soundtrack. They also released two more supreme albums, 1996’s Second Toughest In The Infants and 1999’s Beaucoup Fish, plus a mesmerizing live document in Everything, Everything, all equally worthy of attention, before they reverted to a duo in 2001 upon Darren Emerson’s departure. Their subsequent commercial and critical outings have been mixed (arguably it was Emerson’s influence that made them so compelling during their glory years), but their involvement with the soundtrack to the 2012 Olympic Games’ opening ceremony returned them to the public eye. Since then, 2016’s excellent Barbara, Barbara, We Face A Shining Future and last year’s collaboration EP with punk legend Iggy Pop, Teatime Dub Encounters, combined with a scintillating live stage show, have demonstrated that Underworld still have potential for greatness nearly three decades into their career.

However, dubnobasswithmyheadman is possibly their crowning achievement, the sound of a group reaching their creative peak. It also did surprisingly good business in the UK Albums chart for a band that had been hitherto written off, reaching no.12 and eventually selling over 100,000 copies. 2014’s Super Deluxe 20th anniversary re-master, lasting over six hours and collecting together every conceivable demo, live version and remix, is the final word on one of the most epochal moments in the eventful history of British dance music.

Listen to dubnobasswithmyheadman by Underworld here via Spotify, and tell us what you think below!