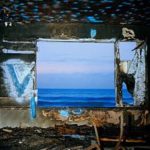 American indie auteur Bradford Cox has recovered very quickly from a serious car crash in December 2014 to record and release his seventh album with Deerhunter. The accident gave him “perspective” and cause to ruminate on his own mortality, even more than he does so already (Cox suffers from Marfan syndrome, a condition where his mere physicality poses a threat to his life). Fading Frontier therefore has an underlying sense of immediacy, lacking the abstract beauty of 2011’s Halcyon Digest but channelling the scuzzy, moody garage rock style of their last album Monomania into something much more direct than we’re accustomed to. Having been shooting his mouth off as per usual about the state of the music scene – he called modern pop music “totally unredeemable” in a recent interview – he’s back with his usual self-appointed mission statement of rescuing music from itself.

Reuniting with their old producer Ben H. Allen, who has been working with some of the biggest names in guitar music since he worked on that 2011 masterpiece, Fading Frontier is a curious mixture of jaggy guitars, moody keyboards and electronic percussion elements, but played pretty much straight down the middle in terms of actual song structure. Opener ‘All The Same’ typifies the set, a bright yet steady and refined piece of indie, inspired by a friend’s father who underwent gender reassignment surgery and lost his wife and family (“changed his sex and had no more”). ‘Breaker’ is like a major-key version of Real Estate, eminently suited to rock radio. The excellent recent single ‘Snakeskin’ is possibly the most accessible thing they’ve ever done, this sometimes impenetrable band holding nothing back with a sloping, sleazy piece of garage rock.

But Fading Frontier is an album of neat, well-executed contrasts. For every moment of to-the-point guitar-fuelled track, there’s a more sedate, synth-based one just around the corner. Cox’s usual method of composing songs in the studio, without having written lyrics beforehand, suits him best on these tracks, such as the woozy ‘Duplex Planet’ that comes off as a meditation upon sickness and recovery. His vulnerable vocals are masked underneath the chiming, pitch-shifted electronics. ‘Leather And Wood’ is a six-minute piano-led track where those same waif-like vocals are exposed to the elements. The fusion of electronics with guitars on the elegiac ‘Living My Life’, a song of quiet but confident introspection, is another highlight that showcases Cox’s preternatural ability to make something unusual sound totally familiar at the same time. The pretty but ultimately throwaway ‘Ad Astra’ works less effectively, however.

As if referring to his convalescence and his near-death experience, the double-meaning of “remains” on the outstanding closer ‘Carrion’ takes on deeper meaning. It’s a glinting diamond of a track, with scraped guitar noises protruding out of a smooth synth-scape. When Cox sings in his frail, wounded alto “I will stay strong”, it’s totally disarming, and shows this great group at their very best. While Fading Frontier doesn’t quite hit the heights of some previous Deerhunter records, it’s still a worthy addition to one of the strongest discographies of the last decade, and arguably the most accessible. (8/10)