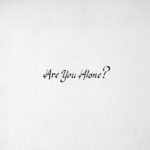 Front cover of ‘Are You Alone?’

Are You Alone? is the sixth album by the mainly studio-bound project Majical Cloudz, headed by the industrious Canadian songwriter Devon Welsh and his technological wizkid sidekick Matthew Otto. 2013’s excellent Impersonator, an unnervingly personal experience set to electronic minimalism, put them on the international indie radar, landing the duo a support slot on Lorde’s world tour, and was shortlisted for the prestigious Polaris Prize, making their new effort probably the first time that an audience has been actively anticipating a Cloudz album. For it, Welsh has chosen the subject of loneliness to meditate upon, and any fans potentially worried about a let-down can rest assured that it’s every bit as good as Impersonator.

If anything, the arrangements on Are You Alone? are even more elongated and spare than those of its predecessor. Welsh’s yearning, new-romantic vocal stylings are set to an almost Teutonic sense of minimalism, very European in its outlook. Otto’s arrangements are so brilliantly conceived that he communicates just as much through silence, through the absence of music, as with music itself. Opener ‘Disappeared’ is set to a sparse piano arrangement reminiscent of Aphex Twin’s drukqs, as Welsh sings in his wounded voice “all I want is for you to come to me the way you used to”, and this establishes the mood for the rest of the record. Faint, metronomic hi-hats and the occasional, isolated thump of bass act as the rhythmical devices, while ambient drones and washes of keyboard remain firmly in the background, with nothing encroaching on the spotlight afforded to Welsh’s deeply affecting voice and his confessionals.

Indeed, his bare, unguarded lyrics often seem to go beyond songwriting and into the realm of social performance art, stripped of all machismo and revealing things to his audience even he is probably thinking twice about sharing. The recent single ‘Silver Car Crash’ features the lyrics “I am afraid of love” and “I am what I am / you got to learn to love me”, which are delivered by a means so completely out of the realms of normal singer-songwriter material that it becomes genuinely moving. The stark, funereal confession of ‘If You’re Lonely’ nevertheless finds hopefulness in its blank-eyed devastation, delivered like a warning from personal experience. ‘So Blue’ is almost painful, as Welsh analyses the aftermath of a break-up from the point of view of a spurned lover, discarded after the spark has gone, singing “I felt so in the way of you” to an ex-partner. It’s an absolutely perfect moment of disarming honesty, but the unflinching self-analysis in the writing cuts deep.

For sure, Are You Alone? is sad, but it isn’t bleak. Instead, it recasts sadness as something to embraced, not feared. The album’s title, then, becomes an invitation, not a pitying condescension, and the music within is to be enjoyed in solitude rather than communally. Artistically, it’s yet another dazzling triumph for Welsh, and sees him take another worthwhile tour through the same music that brought him to wider attention two years ago. (8/10)

Listen to Are You Alone? here!