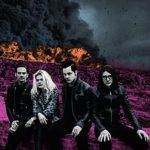 Front cover of ‘Dodge And Burn’

Five years is a long time – especially when you’re Jack White and have a dozen plates spinning from every knuckle and kneecap. Despite half a decade’s wait after 2010’s Sea Of Cowards, it came as a surprise to many that the prolific rocker had time to spare for his bluesy, moody supergroup The Dead Weather at all. In the two years since third album Dodge And Burn was first rumoured, the musical landscape has shifted, but Royal Blood, The Black Keys and even Kings Of Leon have kept The Dead Weather’s grimy blues rocking chair warm, and the gloomsome foursome slip back into the scene with no drastic change of approach. Jack’s bandmates haven’t been scuffing their boots in the sand while he went off to make music – Alison Mosshart has been active as one half of The Kills; bassist Jack Lawrence reignited his old garage-rock outfit The Greenhornes; and guitarist Dean Fertita rode another wave of success with Queens Of The Stone Age’s …Like Clockwork.

Lyrically and musically, the album closes in on the spirit of White’s second solo release Lazaretto, with ghoulish melodrama and power tool guitars. The coffin-raider aesthetic of The Dead Weather is still the look here, but it’s pulled off with a greater sense of fun, and a visceral guitars-drums-vocals union that leaves no space for the maudlin lamentations of Sea Of Cowards’ ‘Old Mary’ moments. Opener ‘I Feel Love (Every Million Miles)’ is a twisted tornado of Led Zep riffs; Mosshart’s voice sounding no less tarnished while evoking a tortured Donna Summer on the brink of breakdown. Fertita’s garage chords and screechy solo sparkles amid Lawrence’s pulsing, atmospheric, corroded bass.

As a vocalist, White is quieter on Dodge And Burn yet we’re reminded how eerily similar his and Mosshart’s voices are (there’s an entire essay that could be written on The Dead Weather’s gender roles) and it’s clear that sometimes the listener isn’t supposed to know who’s singing. “I’m a bad man let me through,” orders Mosshart on ‘Let Me Through’; “I’m a bad man named Jackie Lee,” asserts White on the rambling feud fable ‘Three Dollar Hat’. ‘Cut Like a Buffalo’ ska snares are tossed with nauseating guitar noodlings before Mosshart’s voice explodes over hard riffs and splattered drums. It’s not too much of a stretch in imagination to draw links with White’s much-publicised “tit for tat” kerfuffle with Black Keys vocalist Dan Auerbach. “He’s that bad man named Jackie Lee,” concludes White, who in May unleashed a lengthy tirade against “clickbait” and media misrepresentation via his Third Man Records.

The Dead Weather draw has always been the head-to-head lyricism of White and Mosshart, and the songs are strongest when the simmering duet boils over. The duo head to the carnival on ‘Rough Detective’, an unsettling mix of disorienting chatter and squealing. “What’s happening,” panics White as Mosshart unleashes a threatening laugh. ‘Be Still’ uses their union for mischief, drawing in the listener with Anna Calvi’s breathy croons before a wild cat shriek from White launches a ferocious, organ-led campaign for immobility.

The sultry frontwoman is given the reigns on ‘Open Up.’ Through lyrics are frequently baffling or nonsensical, she asserts herself as a defiant character wrestling with the inevitability of her own downfall: “my hand is faster than the pen but the end has been written down.” After the rubber bullets “Boom Boom Boom” of ‘Let Me Through’, her cracked drawl slips between rap and trance-like sweetness on ‘Mile Markers’. Mosshart echews her agonised squall for something much closer to balladry on ‘Impossible Winner’, a comparable companion to White’s solo ‘Weep Themselves To Sleep.’ Pitchfork’s Stuart Berman dismissed the final track as “the musical equivalent of being awakened in the middle of the night by a flashlight to the face,” but the orchestral, theatrical closer is as every bit as vehement as the shrieking and corroded guitarwork in the 38 minutes that lead up to it.

That White is coming up with his best material since the sun set on The White Stripes is a sentiment that should be whispered carefully, but it’s hard to argue that his musical separation with Meg hasn’t yielded some fascinating collaborations. The Dead Weather won’t be touring Dodge And Burn, showing the group serves as more of a spittoon for feral ire – clearing the way for more refined work with other ventures. If we know Jack, there’s plenty more ire to mine: let’s hope White’s love of threes doesn’t constrict this cathartic project’s output to a triumvirate. (8/10)

Listen to Dodge And Burn here!