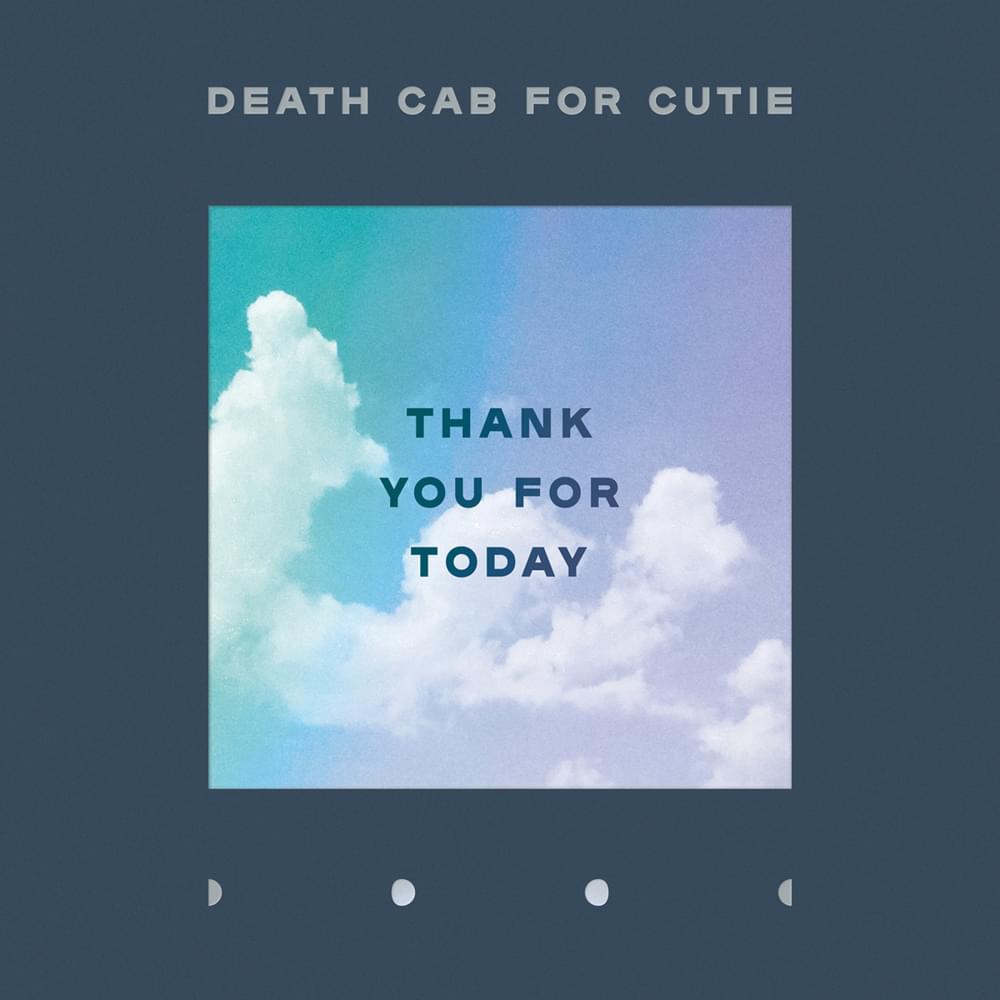 Death Cab For Cutie’s ninth album ‘Thank You For Today’ does what it does extremely well, but 20 years into their career, it suffers from an almost total lack of surprise.

There’s something specific about the brand of melancholy that seems to hover over the entire Pacific Northwest region. Even if you’re writing about it literally oceans away, the setting of dim-lit streets, far-off mountainsides, forlorn kids and lovers lost finds its way into the output through pastel colour schemes, moments so perfectly clichéd that it would be dishonest not to indulge in them, and sad guitars, with the reverb setting seemingly turned to “empty vegan dive bar” in moments of restraint or “literally a cave on a mountainside” when the emotion gets too much to process without echo.

No one can fault Death Cab for Cutie for distilling the melancholia of the region that seems to exists in permanent autumn on yet another album, especially not when they made a now twenty-year career out of it. If anything, it’s impressive that they got the art of it down so well now that they’re able to do it even when the album itself is being recorded in California. Thank You For Today is as perfect moonlit drive across the outskirts of Seattle music as it gets, if anyone ever ends up in that incredibly specific situations. Its biggest fault is not being without a place and an appropriate time, and not even being unpolished. It’s just how perfectly it fits it, without any room for surprise, from a band that nearly twenty years ago helped brand that same north-western melancholia in the first place.

READ MORE: “I Will Possess Your Heart” – An Introduction to Death Cab For Cutie

The album opens with ‘I Dreamt We Spoke Again’, and the first 50 or so seconds of the song, with its simple synth chords and Benjamin Gibbard’s familiar voice, will immediately lull you into a sense of calm, inoffensive ease, while your mind quickly sorts through every relationship and picks the most fitting one to attach the song to. Or it will put you to sleep. This is the second time Rich Costey, whose CV includes Muse, Foster The People and Chvrches, produces a Death Cab For Cutie album and you can hear it in every perfectly-crafted measure, where the sound spectrums of each instrument come together like Lego pieces, no one thing sticking out as any indicator of a personality.

Thank You For Today is full of moments like these. The little melancholic guitar riffs that sound just familiar enough to anyone who’s ever gotten through an American indie album, some vague ambient synthesizer sounds in the background for that added sheen of layered arrangement, and Gibbard singing in a broad sense about memories, or disappointment, or Seattle. If at this point you’re not playing indie band lyrics Bingo in your head, it means you’re a fan of the genre regardless, and if you are, you’ll probably be perfectly satisfied by Thank You For Today and its quest for that perfect sad, yet not depressing, indie song in 2011 that no one released. But at some point one has to start questioning how many more slight variations of the same album can Ben Gibbard release, with the actual cornerstone sad indie moment of their 2003 masterpiece Transatlanticism feeling further away with each new album.

That’s not to diminish the album from any relevance or artistic worth. Thank You For Today is still the strongest and most consistent album the band have released in the 2010s, and arguably their best one since 2005’s Plans. The flip-side of doing a specific thing over and over again is that even when there are no surprises, there’s nothing on here that will completely take you out of the mood or actively anger the fan, or even the casual listener. And for every song like ‘Gold Rush’, which is just a few AutoTune settings away from becoming an Owl City single, there’s a song like ‘Summer Years’, that pulsates with its syncopated beat until bursting into genuine indie bliss when the chorus hits, and you may even remember, for a few seconds, why you attached such significant meaning to these kinds of songs way back when, and how you got into this mess in the first place.

There will most likely always be a place, in a lot of people’s hearts, for those melancholic guitar songs about sad but hopeful experiences in the Pacific Northwest that we get with Thank You For Today. And if another Death Cab For Cutie album just so happens to squeeze in there, on a rainy evening, or a long drive at night, or when you feel like you’re stuck in perpetual adolescence – that’s great. But also, it’s not the late ‘90s or early ‘00s anymore, and there are kind of better things in the same specific niche to listen to now. (6/10) (Ellie Wolf)

Listen to Thank You For Today by Death Cab For Cutie here via Spotify, and tell us what you think below!