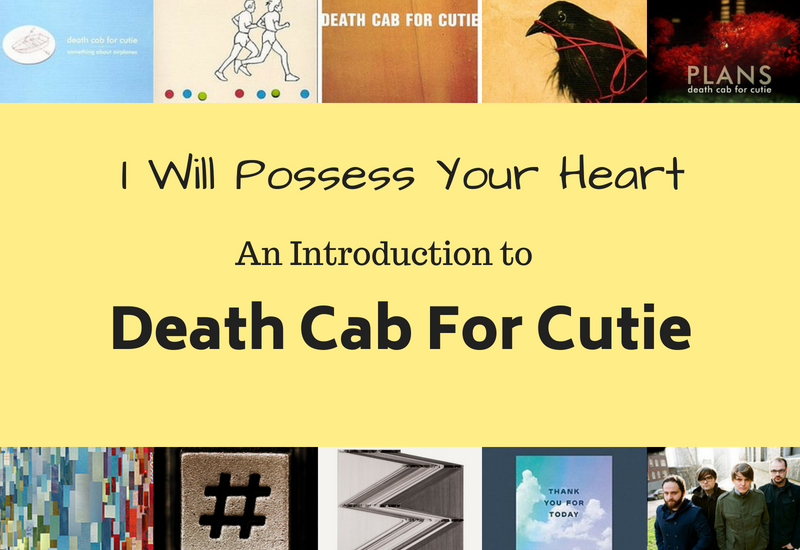 As Death Cab For Cutie mark the release their ninth studio album Thank You For Today in August 2018, it’s a fortunate coincidence that the date it arrived was just one day short of the 20th anniversary of their first. It seems as good a point as any to reflect on the two decades of output for which the band has been responsible.

Raised as a Catholic in the north-western state of Washington, lead singer Benjamin Gibbard was heavily influenced by the Seattle-based grunge scene as a teen, but decided to take the introspection and angst of that music in a different direction. While Gibbard often dealt with sad subject matter in their songs, the band’s music itself didn’t reflect that content. Sure, songs like ‘I Will Follow You Into The Dark’ or ‘Soul Meets Body’ aren’t exactly exuberant, but they’re not moping or wallowing either, and it’s this curious juxtaposition of message and medium that has made Death Cab For Cutie such a consistently compelling draw for two decades. Gibbard has an uncanny knack for expressing himself using sounds that have nothing to do with the emotions that his lyrics are trying to convey. He also tends to sing in full, grammatically precise sentences, which sometimes makes scanning his lyrics to the melodies a little awkward, but marks him out as an aesthete, an obvious target of affection for a certain kind of book-ish indie fan.

If you understood it, you felt like Death Cab For Cutie was a secret that you and only a few others are in on, a club only for you and people like you. This was indie that you could hold in your heart, and whose lyrics you could quote and clutch close to your chest. It also spilled over into the emo scene, before emo got too whiny and adolescent.

Taking a name from a Bonzo Dog Doo-Dah Band song, Gibbard formed Death Cab For Cutie as a solo project in Washington in 1997 while still in the band Pinwheel, but quickly expanded it to a full-band endeavour when he landed a record contract in short order. You can hear the results of Gibbard’s solo demos on the subsequently re-issued 2002 collection You Can Play These Songs With Chords.

Various band members have come and gone over the two decades, but Gibbard’s key creative foils have been guitarist, backing vocalist and frequent producer Chris Walla, who quit in 2014, and bassist Nick Harmer, who has been with Gibbard since the beginning. After a number of temporary drummers, Jason McGerr settled in behind the kit in 2003 and is still in the band 15 years later. That line-up accounts for over two-thirds of Death Cab For Cutie’s existence to date, and they provided Gibbard with a context for his lyrics that made the band’s music stand out. Walla’s crisp expressiveness on guitar, combined with the rhythm section’s unintrusive yet driving percussion, made for a combination that had hitherto been relatively unexplored in American indie.

It’s led to an imposing catalogue that’s well over 100 songs, if you include EPs and B-sides, whose quality has peaked and plateaued over the years, with the group’s mantra always to try to advance their sound. After the jump on the next page, we will tell the story of Death Cab For Cutie’s evolution in broad brushstrokes only, for the purposes of newcomers. For any fans of sensitive, expressive but not overly dramatic indie, they’re an absolute archetype.

We’ve also compiled an Introduction To playlist over at Spotify, to serve as a brief highlights reel for newcomers to Death Cab For Cutie.