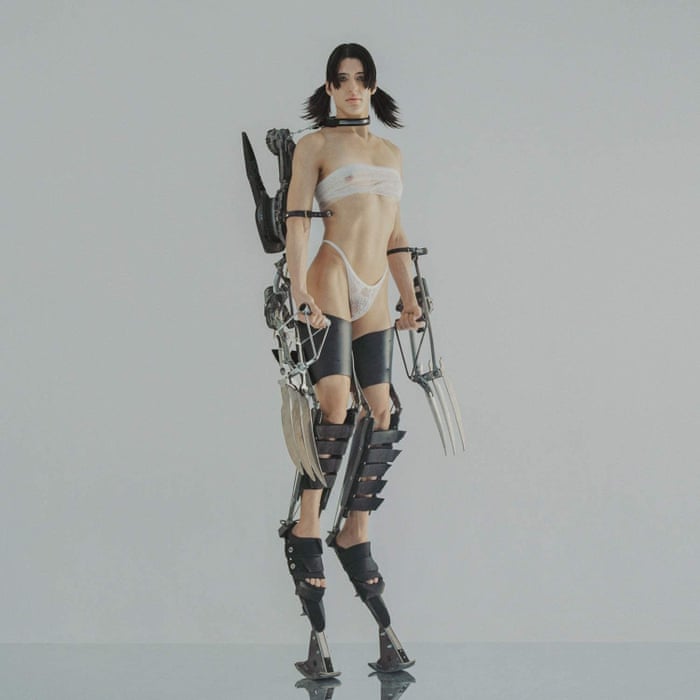 The first of a planned series of four albums, ‘KiCk i’ is the most ‘pop’ of all of Arca’s albums to date, yet retains the avant-garde cutting edge that has always made her music so compelling.

Anyone who’s ever seen Arca perform – in the physical, real life sense, or the virtual Instagram one – knows that this artist is as close to a shapeshifter as anyone could be, as their physical manifestation on Earth constantly strives for change, shift, fusion and truth. Creating beautiful yet at times strikingly violent-looking visual art with her appearance, the Venezuelan artist and producer Arca, also known as Alejandra Ghersi, is back with another surprising release – a first of a promised four-album series called KiCk i, filled with reggaeton rhythms and catchier hooks that we’ve ever heard on an Arca record, suspended mid-air by the retained ingenious production and use of the human voice.

Exploring the variety of self-states or moods (as Arca puts it) on ‘Nonbinary’ in a confrontational, spoken, full of attitude fashion, she sets the pace for the rest of KiCk i – it’s going to be a rough but fun ride, whiplash expected and welcome, as an exploration of one’s multiplicity is on course. The following track ‘Time’ is sweet and hopeful, a rare yet welcome occurrence in Arca’s discography making an appearance – a soaring, tasty ballad, that sounds as if it’s pooling into quicksilver with the elusive synths and vocal performance beckoning “to let it out” – it’s time. ‘Mequetrefe’ brings the well-known syncopated rhythms, dancing between unequivocal confidence and reactionary doubt as one’s surroundings challenge their true expression, inspired by Arca’s recent move to Barcelona, a more ‘traditional’ place when it comes to gender expression. ‘Riquiqi’ follows, adding gun shots to the sonic mix, playing with the word and the voice in constantly shifting fashion to drive the point of range and multiplicity home yet again.

The collaborations on this record succeed to various degrees. Due to Arca and Björk now being long-term creative foils for each other, ‘Afterwards’ hits with less surprise than it could. Focused on healing oneself through their pain, it’s a beautiful track that mixes old-school Björk vocals, sung in Spanish, and Arca’s muffled pounding kick, whispery synths and whispery voice. ‘Watch’ with Shygirl’s excellent verse is a club track waiting to ‘pop off’, as her confident delivery goes hand in hand with Arca’s playful synth and mutating vocal production. ‘KLK’ brings in the powerhouse of ROSALÍA, and possibly underuses her as the track doesn’t aim to be anything else than a rhythmically intriguing attitude-filled track without much structural progression in typical song terms (there is progression, yet subtle).

‘La Chiqui’, on another hand, is a gleefully exciting mix of chops that both Arca and SOPHIE possess – ability to bend sound and voice to their will in fresh ways, using their personal experiences as trans women to produce their first collaboration in hopefully many to come, as production wise these are currently probably the most interesting names in music when it comes to the fringes moving mainstream. Talking of mainstream, the following ‘Machote’ offers the most ‘pop’ track on the record (excluding ‘Time’ in its own right), and poses the question of how pop is the new Arca record, really?

Whilst utilising pop performers and paying homage to various pop moments, KiCk i is still very much left of centre with its glorious rhythmic, visceral production and sonic experimentation. And yet, in Arca’s discography, it’s the most POP album yet. Discussing the multifaceted fashion of one’s persona and gender expression, the record is very Now, an additional piece to the multiplicity puzzle that artists such as Moses Sumney have already proposed their musical offering to earlier in the year. KiCk i might not be the most sonically cohesive or as accessible as some might expect, but it works, as its thematic threads are intact, and Arca taunts us with her ability to constantly produce exciting sounds, hinting at the kinkiness that is yet to come with KiCk’s other parts. It’s a tasty morsel for fans of Arca, and delicious bait for one’s intrigued yet inexperienced in her music. (8/10) (Aiste Samuchovaite)

Listen to KiCk i by Arca here via Spotify, and tell us what you think below!