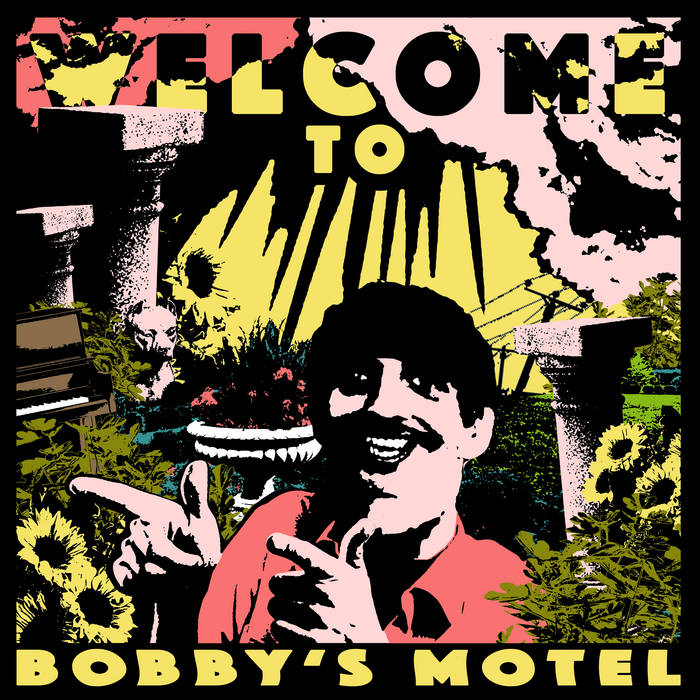 Fusing funky rhythms with the grit of garage-rock and punk, transatlantic outfit Pottery deliver one of the debuts of 2020 with ‘Welcome To Bobby’s Motel’.

Pottery’s debut album, Welcome To Bobby’s Motel displays the breadth of the band’s musical tastes, style and influences, with a good dash of humour and a flair for the unorthodox. With members hailing from across the UK and Canada, Pottery have honed a extraordinarily chaotic sound that, despite the busy stereo field, has the ability to lull listeners into an intense trance-like state. Crammed full of dance rhythms and extremely well-arranged instrument layering, Welcome To Bobby’s Motel is without a doubt one of the most eclectic sounding albums released in 2020 so far.

The album begins with the battering snare drum intro of the exciting title track, ‘Welcome To Bobby’s Motel’. As the song name suggests, this introductory track acts almost as a greeting, welcoming the listener to the bizarre world of music that Pottery have created. The concept of opening up an unfamiliar environment to the listener, and the band almost acting as one’s guides in this sonic landscape, is very enticing, and certainly ties all the material on the album together as one experience, as opposed to just a track listing of unrelated songs.

Pottery certainly fill the canvas, so to speak, when writing their music. The album includes some deliciously outrageous features, such as drastic tempo/rhythm changes mid-song (as heard on the title track), and massive group vocal chants delivered in a style reminiscent of Parliament or Frank Zappa (heard on ‘Bobby’s Forecast’ and ‘Texas Drums Pt. 1 & 2’, for example). The heart of this band’s sound is their unapologetically relentless drive: snappy rhythm guitar and pulsing bass are punctuated by hammering drums fills, with carefully considered mixing techniques allowing each layer to breathe. Nothing is hidden under a sludge of sound, each instrument part seems crisp and clear, and the layering of them really is fantastically well done.

Welcome To Bobby’s Motel is a cracking debut album, it really is. It shows who Pottery are, and what they can do. It contains 11 tracks of exciting, fresh sounding material with strong creative influences, and it’s a joy to listen to. One can only imagine whereabouts they’ll go next with such a diverse and frankly weird sound. Will we see some stranger delights on their next album release? Only time will tell, but for now Welcome To Bobby’s Motel has got plenty of funky, gritty goodness to sink your teeth into. (9/10) (Jacob Kendrew)

Listen to Welcome To Bobby’s Motel by Pottery here via Spotify, and tell us what you think below!