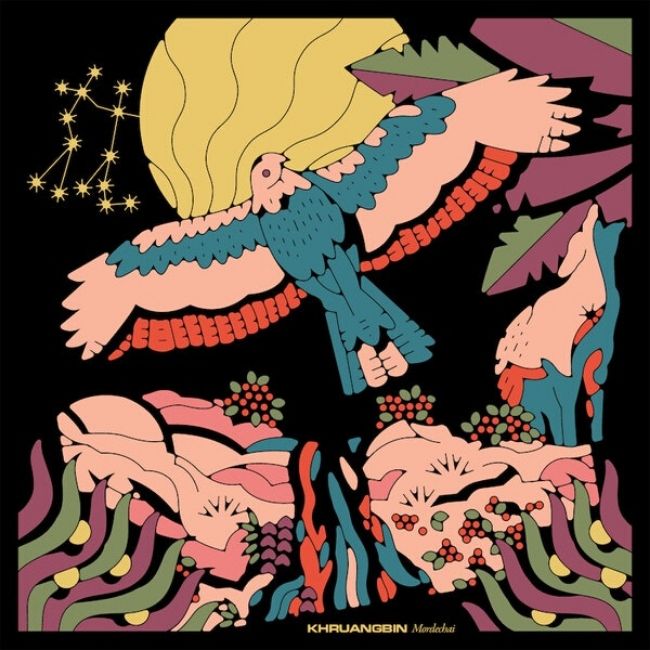 On their third album ‘Mordechai’, Khruangbin take their globe-trotting aesthetic in a more conventional pop direction, but it’s no less rewarding.

Versatile Houston-based soul and funk trio Khruangbin have returned with their third full-length album Mordechai. Coming less than five months after their previous release Texas Sun, the collaborative EP with soul singer Leon Bridges, the band continue to gradually steer away from the largely instrumental style by which their previous two full-length releases, 2015’s The Universe Smiles Upon You and 2018’s Con Todo El Mundo, were characterised, in favour of a more direct, song-oriented approach as is exhibited here.

That’s not to say, however, that the instrumentals have been ditched completely. Likewise, most of the tracks on Mordechai that do actually contain lyrics typically consist of only a small handful of lines that are repeated frequently. A prime example would be the opener ‘First Class’, whose lyrics are exclusively made up of one or two-word expressions, such as “champagne”, “white suit” and, of course, “first class”. The transition is therefore a gradual one, certainly not significant enough to alienate the swathes of newcomers that have joined the Khruangbin fanbase over the past two years.

Furthermore, it would be inaccurate to claim that the trio’s eclectic nature has been compromised in any way, as this album sees them drawing inspiration from a wide range of genres, including disco, dub, reggae, post-punk and flamenco music. Meanwhile, with regard to thematic influences, Khruangbin themselves have expressed that inspiration for many of these tracks can be traced back to individual people or things from their past, either as a band or as individuals, such as the late bartender at a pub where the band would usually meet (‘Connaissais De Face’), a family of birds outside of their recording studio (‘Father Bird, Mother Bird’), or bassist Laura Lee’s ancestors (‘Dearest Alfred’), including her grandfather, to whom 2018’s Con Todo El Mundo had already been dedicated. These intimate details undoubtedly contribute to the charm of Mordechai, imbuing the tracks with an extra layer of meaning, demonstrating how stark imagery can still be forged despite the relative scarcity of lyrical reference points.

Nevertheless, it is the songs that contain vocals that have the highest repeat value here. For example, the aforementioned ‘First Class’, with its jazzy and ever-so-soothing minor seventh chords, as well as its reverb-heavy vocals that are comparable to neo-psychedelic outfits such as Tame Impala, conveys the theme of homeward travel perfectly. This is followed by the retro funk of ‘Time (You And I)’, whose repetitive vocal melodies and groovy bassline render it an instant earworm, before embarking on an outro complete with the line “That’s life” repeated in a multitude of different languages.

Probably the biggest grower on Mordechai is the six-minute slab of blissful lounge music that is ‘If There Is No Question’, a song that benefits greatly from a subtle but effective upwards key change leading from the verse into the chorus. When coupled with the reverb-heavy vocals and lead guitar, as well as the climbing vocal melody as the track’s namesake is sung, an extremely serene atmosphere is conjured, whisking the listener away on a refreshing musical journey far above the clouds. A very welcome escape to the exceedingly grim reality of living on Earth at this present time!

However, the two utmost highlights on this album are bound to be instant favourites for most listeners, namely the Spanish Rumba and flamenco-inspired ‘Pelota’ and the stunningly beautiful ‘So We Won’t Forget’. Both tracks are primarily driven by Mark Speer’s chiming lead guitar, in particular the latter, whose song structure is purely centred around a repeated chorus section, interspersed with flashes of melodious guitar work and tight, post-disco accompaniment from the rhythm section. Nevertheless, the vocal melodies and chord progressions play a slightly more significant role in the former, alternating between the natural minor and harmonic minor scales, as is not uncommon in flamenco music, and ultimately contributing to the enhanced memorability that the greater emphasis on vocals in Khruangbin’s music has brought to proceedings.

And overall, this is what sets Mordechai apart from its predecessors. By striking a greater balance between pure instrumentals and more conventional pop songs, the results are infinitely more accessible, memorable and, for the casual listener at least, rewarding. Granted, it may not be consistently engaging throughout, perhaps prompting the listener to zone out now and again, particularly during the instrumentals, and hence one might be tempted to brand this record as merely ‘background music’. Yet while the weaker moments are simply ‘pleasant’, the stronger moments sure do make their presence known and ought not to be overlooked, as they may just be a sign of what’s to come in the next chapters of Khruangbin’s career. (7/10) (George McKenna)

Listen to Mordechai by Khruangbin here via Spotify, and tell us what you think below!