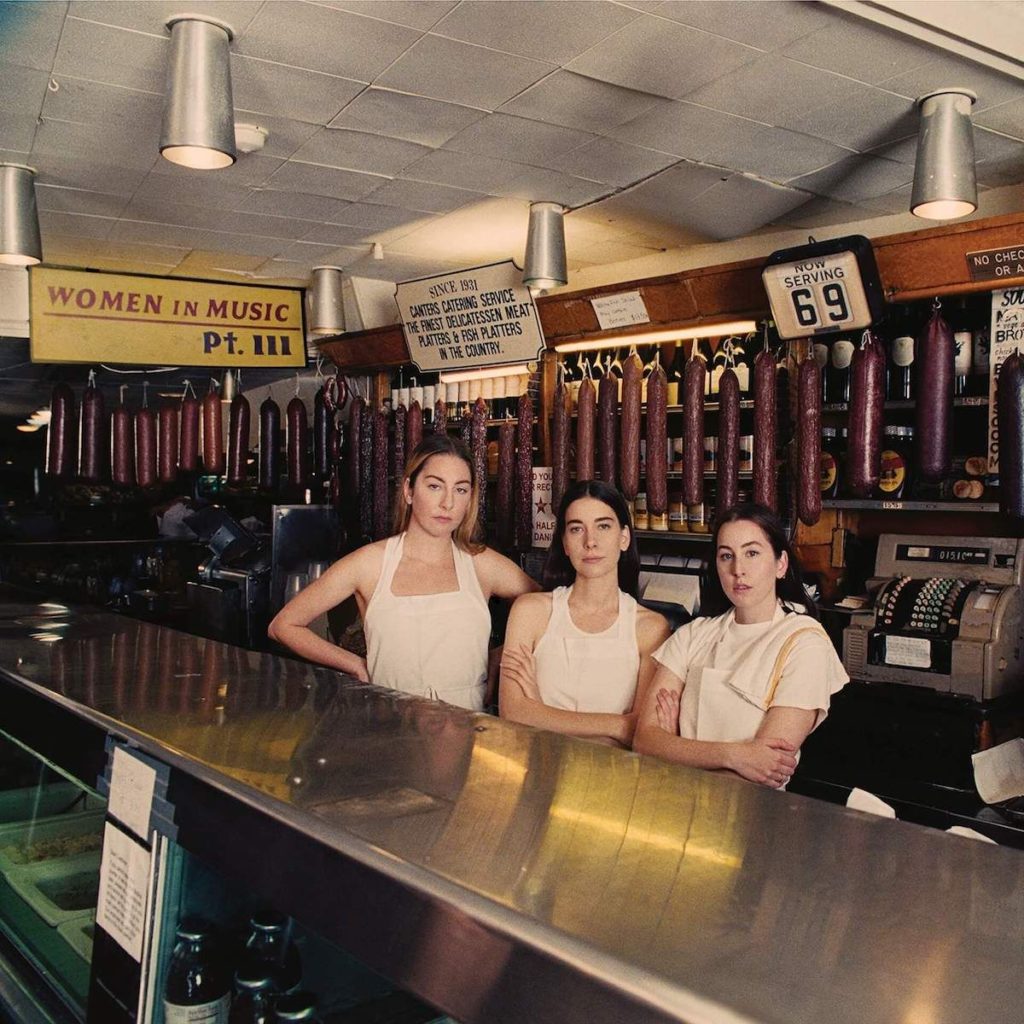 Less summery and shiny than Haim’s previous albums, ‘Women In Music Pt. III’ is a tough, forthright statement of importance.

On their third album, bluntly titled Women In Music Pt. III, the Haim sisters open up like never before, bringing their traumas and deeply emotional experiences to the studio, only this time around not trying to hind behind vague lyrics or overly polished production. WIMP3 doesn’t feel as summery or shiny as the band’s previous records did, yet it’s even more compelling in its raw and vulnerable form.

Haim start with a song dedicated to their home town – ‘Los Angeles’ is the city where Danielle, Este and Alana grew up, and a place where their music career started. The city of angels hasn’t always been kind to the sisters, who reveal moment of sadness and loneliness on WIMP3’s very first track: “It’s killing me / hometown of mine / just got back from the boulevard / can’t stop crying”. On the following track ‘The Steps’, it’s becoming easier to understand why Haim feel the way they feel sometimes – frustrated, and often furious, for not being treated equally in the music business and undermined in every step they were taking as women in a band.

READ MORE: Haim // ‘Something To Tell You’ – album review

The underlying sentiment of the album is the one of putting their foot down, once and for all showing everyone that they are as serious musicians as any man could be, without giving up on their identity and individualism. On WINMP3 there are songs which speak about utter loneliness, such as on ‘I Know Alone’, a state of body and mind which can be both overwhelming and cathartic, or the moment of not being able to “recognize myself now” and feeling completely lost, on the therapeutic banger ‘I’ve Been Down’.

Haim sound most like their past-album selves on ‘Up From A Dream’ which has a denser arrangement and stays in the vein of being hazy and ambiguous, as well as on the feel-good ‘Don’t Wanna’ which Alana described as “classic Haim”. When we slowly approach the end of the record, an honest and confessional song about the misogyny in the music industry turns up, written in the most direct way – on ‘Man From The Magazine’, Haim bring back a question directed to Este by a journalist referring to her making faces while plying live: “Do you make the same faces in bed?”, or a comment given to Danielle in a guitar store after being handed a ‘starter guitar’: “Hey girl, why don’t you play a few bars?”

On Women In Music Pt. III Haim reject the idea of not being taken seriously anymore and effortlessly prove that they are exactly where they should be. Their third album is both fun, as the sisters have always been since their debut Days Are Gone from 2013, and relatable, thanks to their heartfelt and outspoken lyrics. If it was up to me to, Haim, or any other woman, would never have to face any double-standards in the music industry again, yet only time will show how optimistic and how realistic we can be about that, even after listening to such an excellent album as Women In Music Pt. III. (8/10) (Alicja Rutkowska)

Listen to Women In Music Pt. III by Haim here via Spotify, and tell us what you think below!