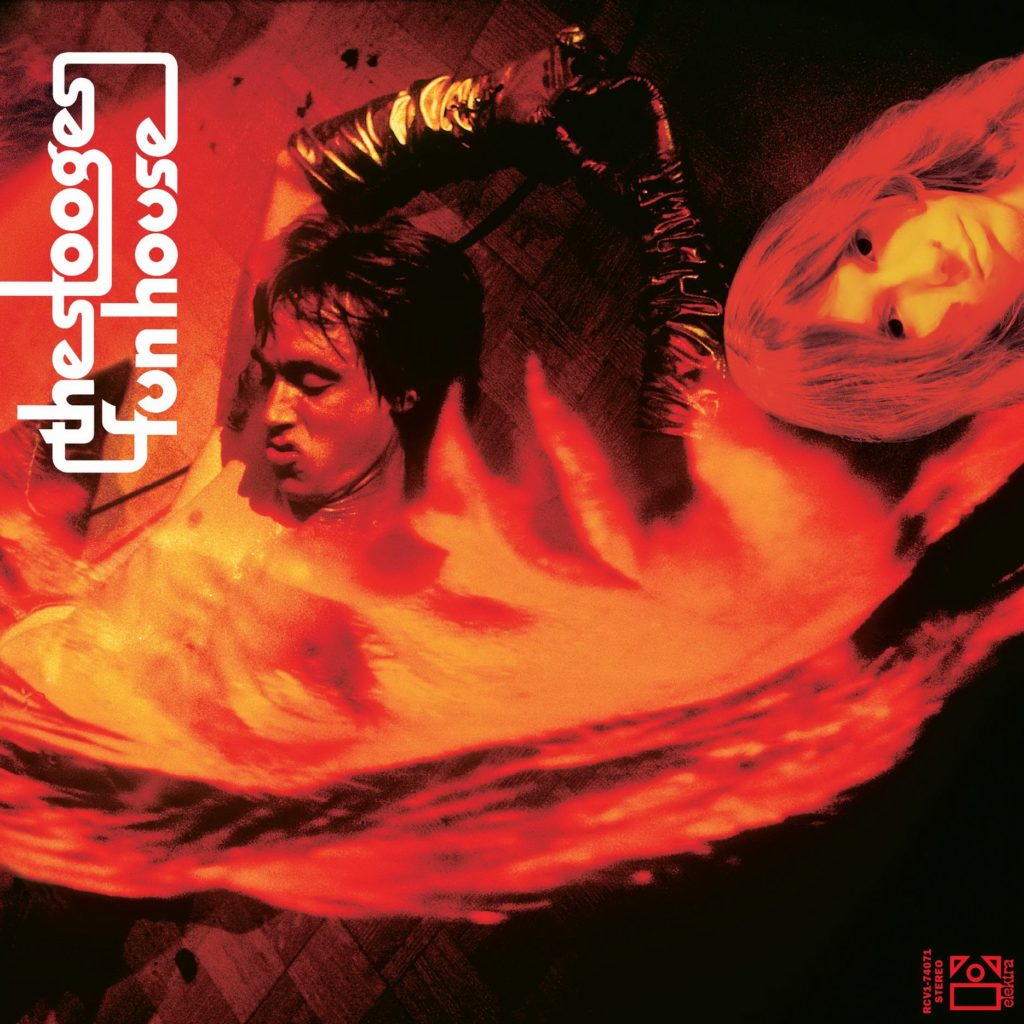 Given their rightful status in music journalism circles as one of the very greatest garage-rock groups of all time, and certainly one of the most influential in any genre, many newcomers might be surprised to learn that the real-time career of The Stooges was one of chaos, creative frustration and, it must be said, commercial underachievement. Like the Ramones, they’re one of those bands that have sold many more T-shirts than actual albums. Fair enough, virtually any reasonably well-versed rock fan will be familiar with ‘I Wanna Be Your Dog’, but that’s about it in terms of their lasting mainstream impact. Before David Bowie persuaded them to reconvene to record the proto-punk cornerstone Raw Power in 1973, The Stooges had split up in ignominy and chaos, held together by a patchwork of live stand-in replacements and addled with various addictions. But before they did, they released an album in July 1970 that first ever example of punk music, Fun House.

Live, they were a thrilling riot of audience-baiting amphetamine noise, the mesmerising focal point of which was Iggy Pop and his misadventures with cream pies, peanut butter and broken glass. However, their self-titled debut album, while not without its strengths, hadn’t come close to succeeding in capturing the power of those live performances. Produced by The Velvet Underground’s John Cale, it had sought to capture some of the dystopian menace and sour atmosphere that chimed with the end of the Sixties, but that had meant sacrificing some of the group’s inherent power.

When it came to releasing a follow-up, Elektra didn’t have much faith that they’d find success the next time around, and assigned The Stooges a largely unknown staff producer in the form of Don Gallucci, who, in contrast to Cale’s learned expertise, could only really boast having played the deathless organ riff on The Kingsmen’s immortal garage-rock hit ‘Louie Louie’ some years previously. Together, they hunkered down to produce what would become Fun House over two weeks in May 1970. With the temporary addition of saxophonist Steve Mackay, the group and their producer decided the best strategy would be to deliberately try to replicate the power of their stage show. To this end, The Stooges set up their equipment all in the same room in the studio, as if they were playing a club, and Gallucci exhaustively ran them through live take after live take. Iggy performed with his hand-held microphone, and the speakers for each instrument were placed next to each other, causing the sounds to bleed into each other.

The results were occasionally very primitive and low-tech, but undeniably effective. As a listening experience, Fun House is pretty cleanly split down the middle. The first side opens with an unbroken trio of some of the greatest straight-down-the-line garage-rock tracks in history – the raw and gritty adrenaline rush of ‘Down On The Street’ with its duelling guitar solos, the no-holds-barred hedonism of ‘Loose’ and the blazing onslaught of ‘T.V. Eye’. As a method of hooking in the listener, it’s a combination that’s up there with the finest (or at least most effective) opening sequences on any album ever. ‘Dirt’ then drastically lowers the tempo and is based on one of the most decadently sleazy bass riffs imaginable, the sound of sex and submission made into music, building and peaking slowly over seven minutes.

The second half opens as a comedown after the party of the first side, more jaded and cynical. The fatalistic ‘1970’ is a sonic and thematic sequel to The Stooges’ iconic opener ‘1969’ – yet another year with “nothing to do”, it finds Iggy “out of my mind on a Saturday night”, it’s based on a similarly primitive riff before eventually burning up in a firestorm of Mackay’s sax. That instrument then becomes a central piece in the lengthy title track ‘Fun House’, a counterpoint to an almost symphonic performance from the rest of The Stooges guided by Asheton’s insistent riff and Iggy’s extraordinary vocal. Sounding like a lost, scared boy/man losing his identity, trapped in the fun-house distortion of his own rock’n’roll lifestyle, it’s a definitive performance from one of rock’s foremost characters. Fun House doesn’t so much end as collapse, flaming out in the hellish freakout of closing track ‘L.A. Blues’, which abandons any sense of structure for a freeform squall that seems to musically represent the fiery front cover artwork.

Even their simplest and sturdiest performances have an inherent feeling of instability about them, as if Scott Asheton’s drumming or Dave Alexander’s rumbling bass-playing are going to collapse the rhythm section at any moment, or Iggy’s vocal meanderings are going to descend into outright grunting and hollering. Ron Asheton’s wiry, nihilistic riffing is the thread that holds everything (just about) together, solid enough to provide structure yet loose enough to fit in with the scuzzy depravity of his bandmates’ performance styles.

That arrangement perfectly suits the nature of the album’s content, the sound of bitter, post-Altamont regret after the wild abandon, endless possibilities and missed opportunity that the Sixties represented as it receded in popular culture’s wing-mirrors. For a country divided by the Vietnam War, with arch-conservative Richard Nixon in the White House and whose cities were marred by violence and spiralling economic depression, Fun House was the perfect soundtrack, a sonic equivalent of a bad LSD trip. It’s the absolute antithesis of peace, love and understanding that the hippie dream had advocated, and one that chimed completely with the mood of pessimism in 1970.

Not that it did The Stooges any good at the time, however. Contemporary reviews were lukewarm, and they struggled on with essentially no profile outside of critical circles. By the time that the touring around Fun House had ended in early 1971, all of The Stooges except Ron Asheton were afflicted pretty seriously by heroin. Dave Alexander had been dismissed the previous August following a notorious live show at the Goose Lake International Music Festival in Michigan (recently commemorated in a live album on Jack White’s Third Man Records) where he was reportedly so drunk he physically couldn’t play his bass. Elektra dropped the band from their roster, a hiatus of several months was announced, and then, on July 9th that year – almost exactly 12 months after Fun House had come out – The Stooges announced their first split.

While their short life was chaotic, the legacy of Iggy Pop and The Stooges is one so critical to the evolution of punk and wider alternative music as we understand it in 2020 that it’s simply impossible to imagine a world without them. Along with other pioneers like The Velvet Underground, the New York Dolls and the MC5, they pretty much invented a whole host of rock clichés. All those truisms about rock and punk being the distillation of the fury and frustration of youth – The Stooges embodied that. The apocalyptic garage-rock blowout of Fun House is one of the key pillars of that reputation.

Listen to Fun House by The Stooges here via Spotify, and tell us what you think below!

Influenced by: Howlin’ Wolf, Sun Ra, The Sonics, The Velvet Underground, The Rolling Stones, The Doors, The Thirteenth Floor Elevators