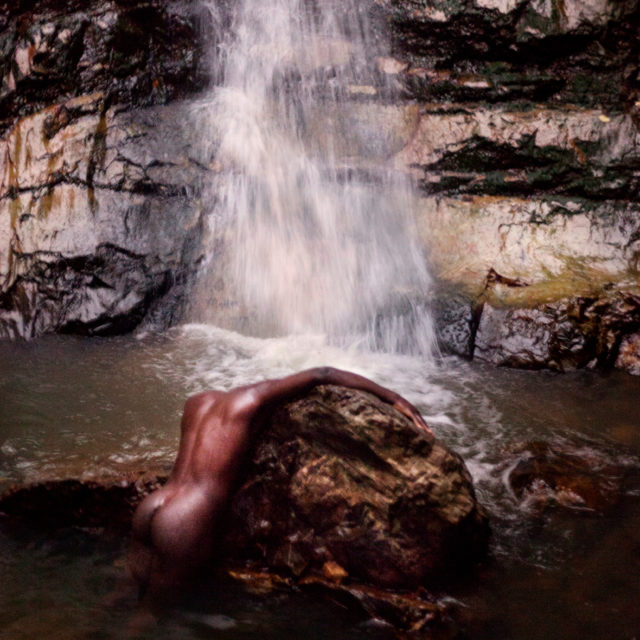 Acknowledging that the truths about our existence exist in the grey areas that elude binary definitions, Moses Sumney’s ‘græ’ is his second masterpiece.

Moses Sumney is a surprisingly funny guy. Having had the pleasure of witnessing him on the Aromanticism tour, it was peculiar yet fitting how witty and tongue in-cheek he was between tracks, yet completely serious, in control and mesmerising during them, pulling the crowd deep into his signature swirls of layered baroque-esque vocals and angelic harps. This duality is part of Sumney’s evergrowing multiplicity, one we are invited into on his new double album græ, the first half of which landed back in March and which was completed by the second this month.

We got a glimpse of his sonic and lyrical complexities on Aromanticism, his first studio album, where whilst wistfully floating sonically, a gentle caress to the ears, he critiqued romance as a be-all-and-end-all. On his second, græ, we get to bathe in his loneliness and yearning, searching for comfort within that multiplicity, awash with abstract instrumentations in no way overshadowing the vocal beauty he was always adept at creating, complimenting it with subdued, careful touches. Each track explores a different pleasure, Sumney’s confident assertions of his grey truths of existence makes oneself contemplate their own multiplicity in a world of enforced binaries. Here, Sumney is an island trying to write and understand its own history and future, feel out its aches, aches of identity, aches of desire, aches of freedom.

Greeted with writer Taiye Selasi’s voice explaining the etymology of the word ‘isolation’, this album seems almost a too fitting listen for a world stuck in lockdown limbo. With the following three tracks, Sumney introduces the main themes of the album. On ‘Cut Me’, he narrates his complex relationship with self-inflicted pain as a measure of progress, the masochism of constantly questioning and drilling oneself a drive for his growth in understanding himself. Moses’ voice playfully sits atop a brass undercurrent, the track focused, while the following ‘In Bloom’ sonically twists towards something a bit more surreal, touching upon unrequited romantic feelings towards a friend and hinting at the painful loneliness he fears he’ll be carrying for a long time, such as on the track ‘Me In 20 Years’. ‘Virile’ introduces Sumney’s discomfort with the traditional description of masculinity and the various ways men try to conform and ‘pass’ as masculine enough, Sumney concluding that “I can feel the earth / Overtake my skin / And I realize none / Of this matters / ‘Cause I will return / To dust and matter”.

The menacing ‘Two Dogs’ opens the second part of the album, Sumney’s haunting voice and melody a black ink amongst the watercolour of the menacing instrumentation, heralding a sequence that’s a lot darker than its predecessor. ‘Bystanders’ follows as a cautionary tale to treasure one’s energy and identity, ‘Me In 20 Years’ a climax of this procession, summarising the fear of aloneness in the wake of losing companionship, one left alone with their flaws and pride, a cavity of a missing piece by their side each night. Sumney closes the album off with a spoken musical outro, the last of the punctuating intervals where the voices of Taiye Selasi, Ezra Miller, Jill Scott and Moses Sumney himself narrated the questions inspiring and enriching living the græ. The last piece ‘before you go’ embraces the aches previously laid out in front of us, concluding with an encouraging “now go” to go and live out the ache ourselves, akin to pushing somebody out of a plane with a parachute one second before they were expecting it.

There is no need to yet again go on and on how humbling, emotive, and eloquent Moses Sumney’s voice and music is on all of these tracks, as it is simply apparent. It is a perfect conduit for the confident expression of his vulnerability through his poetic lyrics, Sumney’s musical skill moulding all of this into a musical world like no other. His lyrical poetry, on the other hand, contains a dash of sobering modernisms, like the inclusion of the abbreviation ‘BFF’ on ‘In Bloom’, proving and reminding us that Moses Sumney, same as his music, his lyrics and his inner conflicts, is a spawn of his time, græ mirroring the inner conversations the modern person has whilst trying to understand themselves and our nonsensical world. We are in luck that he is here to articulate these conversations better than anyone else, a singular artist of our generation, confident in his vision, producing work that feels both of its time and timeless. (9/10) (Aiste Samuchovaite)

Listen to græ by Moses Sumney here via Spotify, and tell us what you think below!