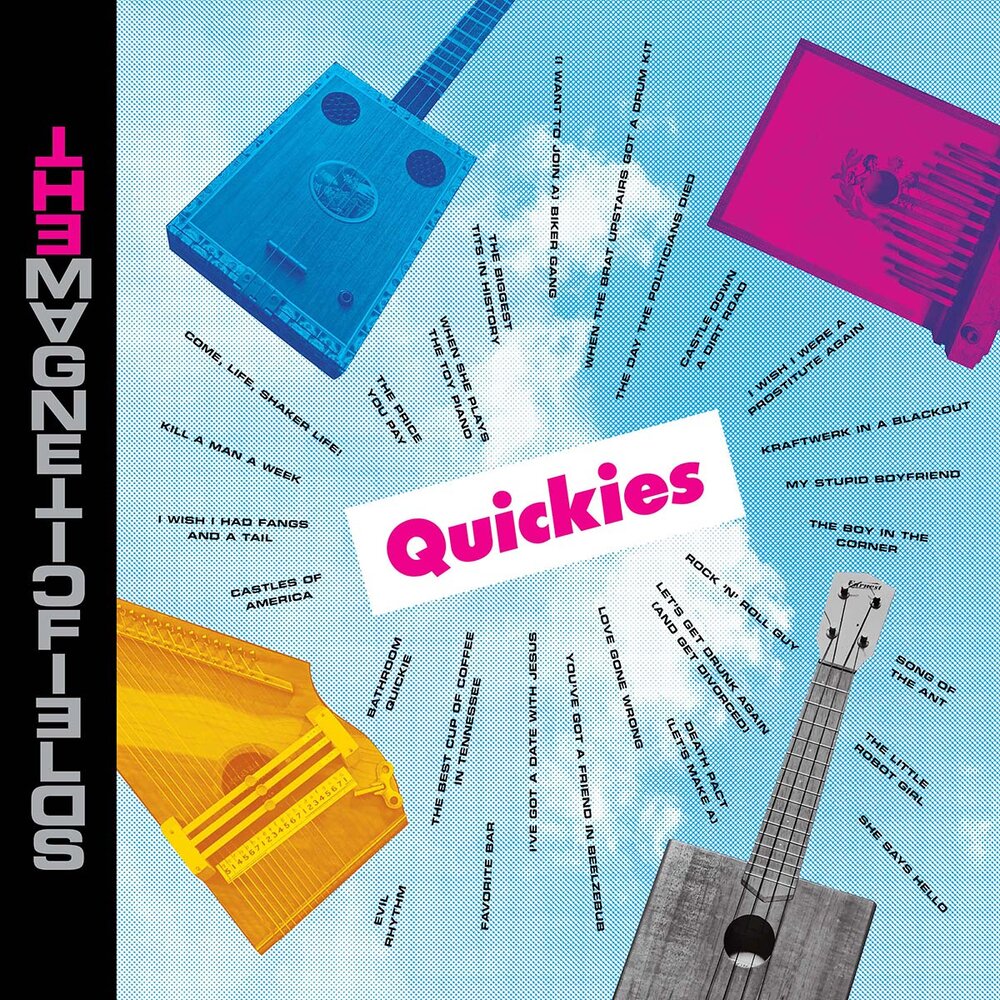 Ever since the unparalleled creative achievement of 69 Love Songs over two decades ago, Stephin Merritt’s subsequent albums heading up The Magnetic Fields have almost all been constructed around a central theme, be that stylistic, generic or otherwise. 2010’s Realism and 2008’s Distortion saw his music informed by folk and guitar effects respectively, and 2004’s i had every song title begin with the same letter. Note that a phrase such as ‘novelty’ would be completely wrong to describe this tendency – Merritt is far too intelligent a songwriter to resort to anything like gimmickry.

Quickies, the 12th Magnetic Fields album in total, is the complete opposite to the exhausting epic that was their last outing, 2017’s autobiographical 50 Song Memoir. Its title is self-explanatory – here, Merritt and his long-term creative foil Claudia Gonson ruthlessly restricted themselves. The longest song is a little over two-and-a-half-minutes, the shortest just 17 seconds, and the whole collection collapses 28 brief yet detailed song sketches into just over 45 minutes. Nothing that Merritt hasn’t been doing his entire life, if you look back over his career, but Quickies is another compelling and mostly enjoyable demonstration of his songwriting versatility.

With a 35-second overture in the form of ‘Castles Of America’, the ukulele is the primary method of delivery on Quickies, which suits the miniature ditties and vignettes which see Claudia Gonson take on a majority of the vocal duties. At its best, the songs lodge themselves in your consciousness on very first airing. Gonson’s wordplay on the sub-minute ‘Bathroom Quickie’ is dazzling, and her presence in the irreverent ‘You’ve Got A Friend In Beelzebub’ makes it one of the album’s lascivious highlights, imagining a host of demons as possible friends and lovers. She and Merritt duet on the side-splittingly hilarious yet emotionally savage ‘My Stupid Boyfriend’, and make ‘When The Brat Upstairs Got A Drum Kit’ like a delightful off-cut from the aforementioned 69 Love Songs.

On the longest track, ‘Come, Life, Shaker Life!’, his chosen theme can get a little repetitive, even within the conceit of short, concise songs. Particularly in the album’s second half, there is also a little part of you that wishes some of the songs would stay around just a little longer, whirring by a bit too quickly, particularly the back-to-back ‘The Boy In The Corner’ (slower and sparser to break up the mood) and ‘Song Of The Ant’ (an intriguing sketch on the piano). It all ends, however, with one of the best Magnetic Fields songs ever in ‘I Wish I Were A Prostitute Again’, in which Merritt puts himself in the position of sex worker with a client who used to demand bizarre and debasing performances but who died and left him millions of dollars.

There are other textures and moods to be heard, though. Lead single ‘The Day The Politicians Died’ is based around a simple piano motif. The baroque delivery of ‘Kill A Man A Week’ contrasts interestingly with its lyrics and message. ‘The Best Cup Of Coffee In Tennessee’s protagonist plans to marry a waitress, in which seemingly throwaway lines like “she’s fat / I like that” somehow make the character study more real.

Stephin Merritt’s appeal has always been down to his deep knowledge and intelligent interpretation of classical songwriting techniques, giving his material a timeless quality redolent of Stephen Sondheim, Cole Porter or the Gershwins, making those character studies so compelling. While he and his lieutenants don’t quite hit the mark every time, the rate of changeover inherent to Quickies renders this a minor complaint, as there’ll be another idea along in a matter of moments. Ultimately, it’s another star in an already very bright firmament for The Magnetic Fields. (7/10) (Ed Biggs)

Listen to Quickies by The Magnetic Fields here via Spotify, and tell us what you think below!