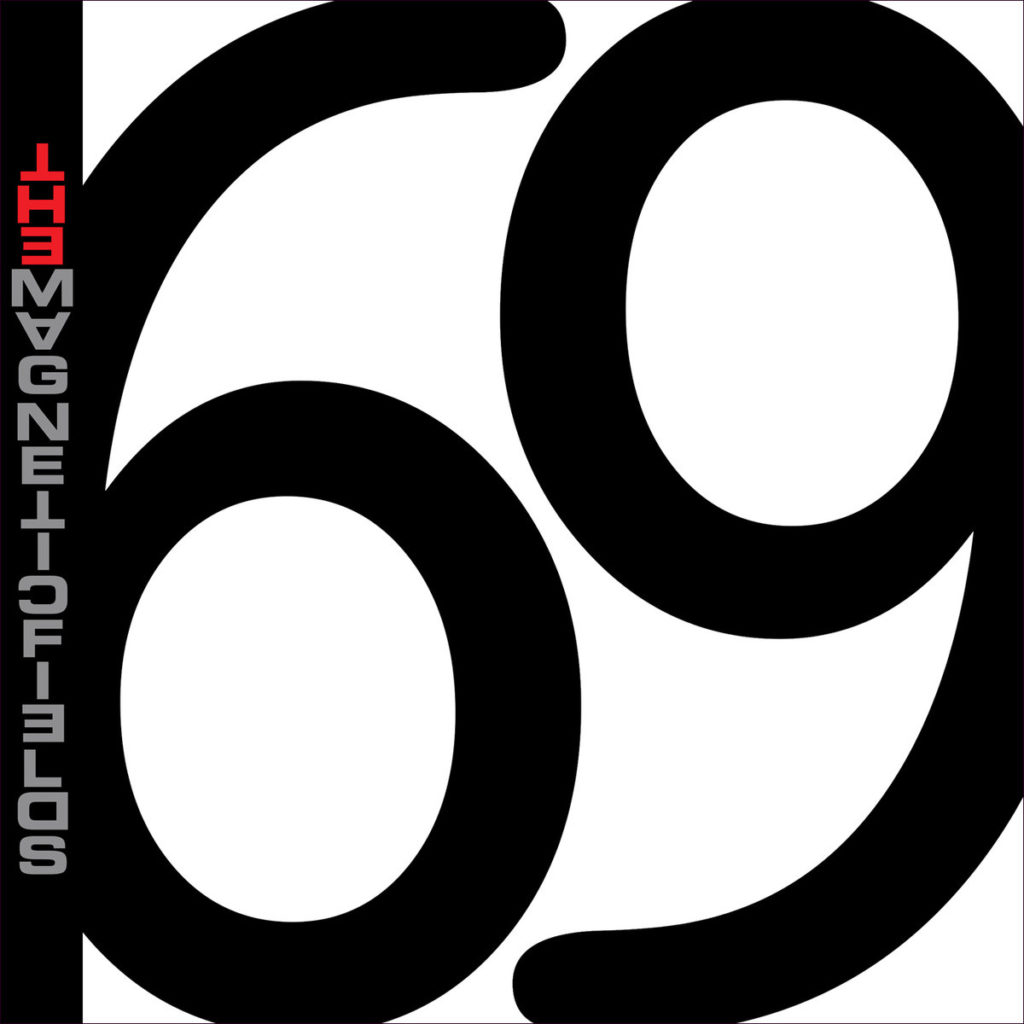 There’s a line in ‘How Fucking Romantic’, halfway through the first disc in The Magnetic Fields’ massive triple-album 69 Love Songs, in which Dudley Klute, one of the many creative foils utilised by the group’s leader Stephin Merritt, breathily sings “drag another cliché howling from the vaults”. A sub-minute, a-cappella track set to finger snaps, it’s easy to miss in the context of a record that lasts nearly three hours and spans almost every conceivable genre and pop music vernacular, but in many respects it encapsulates the project’s raison d’etre. Throughout the enormous song suite – unquestionably his magnum opus, even in a career characterised by ambitious concepts – Merritt takes such threadbare clichés from popular song and stands them on their head. As he himself pointed out in interviews at the time, 69 Love Songs is not an album about love, but about love songs, which is another prospect altogether. By examining and interrogating these well-worn concepts, one of the key mediums by which we as a society think about love, what it means to us, and how we celebrate it, Merritt breaks open an almost endless realm of possibilities.

Authoring five acclaimed albums in as many years, Stephin Merritt and The Magnetic Fields had forged strong reputation by the mid-Nineties, associated with the wave of alternative acts that were gaining attention from America’s nation-wide indie network, yet not entirely belonging to it. Merritt’s songwriting had always been strongly indebted to more classical (and certainly pre-punk) influences than many of his band’s contemporaries. Sitting in a gay piano bar in Manhattan and listening to florid renditions of Stephen Sondheim originals, he had the idea to write a collection of 100 love songs, packaged as “a theatrical revue with four drag queens. And whoever the audience liked best at the end of the night would get paid.” Writing these songs in bars around New York City over the course of several years, recording them in large part by himself and whittling the number down to 69 – presented over three 23-track discs – the finished album was released in September 1999.

The obvious risk of a massive project like this is that quality control goes out of the window, subordinated to the needs of quantity. But what’s remarkable about 69 Love Songs is how consistently enjoyable and consistent it is, both in engagement of attention over a whopping 173 minutes and in terms of the delivery of emotional clout. The songs fall into four broad categories – melodramatic ballads, short ditties, playful genre exercises and the kind of default indie-rock that The Magnetic Fields had built their career on thusfar. The tracklisting is ordered in such a way that the mood and tone changes constantly, never allowed to settle in to one particular mode for very long, keeping the listener’s attention. It’s an exhausting listen, far too much to internalise in one go first time out, but repeated listens and using the shuffle function quickly reap rewards.

The ballads seem to be Merritt’s strongest suit for anyone unfamiliar with his work and seeking a way in to 69 Love Songs. The hilariously mopey ‘I Don’t Believe In The Sun’ would be leaden in someone else’s hands, but Merritt scores it through with enough knowing sarcasm to carry it through. That self-deprecation is seen in ‘I Don’t Want To Get Over You’ and ‘Grand Canyon’, and uplifts the outrageously beautiful ‘Busby Berkeley Dreams’, while Merritt seems to play the honky-tonk dreamscape of ‘Papa Was A Rodeo’ with a straight bat. ‘The Book Of Love’ is probably the most famous song from the album, covered by Peter Gabriel and appearing in an episode of ‘Scrubs’. Meanwhile, the likes of the sauntering ‘No One Will Ever Love You’ and the new-wave leanings of ‘The Death Of Ferdinand De Saussure’ more neatly fit the template of the kind of music that The Magnetic Fields were already making.

Upon further listens, however, the more eclectic aspects of 69 Love Songs begin to reveal their charms. What’s noticeable is the number of pretty, upbeat tracks like the opener ‘Absolutely Cuckoo’, or the springy ‘The Luckiest Guy On The Lower East Side’, that serve to break up the mood with sharp, memorable hooks. These are often sung by Merritt’s revolving cast of backing singers – Claudia Gonson steals the playground chant of ‘Washington, D.C.’ and the yearning ‘Acoustic Guitar’, while LD Beghtol and Merritt share the spotlight on the ukulele-driven ‘The One You Really Love’. Shirley Simms takes the sweeping ‘Kiss Me Like You Mean It’ for herself, which is both grandiose and minimalist at the same time.

Then there’s the most interesting and delightful aspect of all – The Magnetic Fields’ take on a whole panoply of genres, ranging from medieval folk to minimalist electro-clash via reggae, jazz and accordion music. The florid electronic pop of ‘Long-Forgotten Fairytale’ is a treat, while the feathery, skittering ‘Strange Eyes’ was a take on electro-clash before it even hit popular consciousness. ‘It’s A Crime’ would be an almost offensively stereotypical rip-off of reggae if it wasn’t so sincerely delivered. Merritt even explored harpsichord music on ‘For We Are The King Of The Boudoir’, and what sounds like medieval minstrel music on ‘Wi’ Nae Wee Bairn Ye’ll Me Beget’. While they’re both pretty chintzy and seem rather arbitrary, they do illustrate Merritt’s extreme versatility, his bloody-minded ability to literally turn his hand to any instrument or style and not only wrangle a tune from it, but a catchy and strangely affecting one too, filled with sophisticated lyrical conceits and flourishes.

While some of the tracks do admittedly feel like conceits – there’s no time to fully three-dimensionalise songs when operating on this kind of scale – the way that 69 Love Songs is presented somehow makes that exactly the point. All of the tracks concern love, directly or tangentially, but they are almost all delivered playfully, in an ironic or off-beat manner, to leaven or undercut their lyrical content or the surface-level gravitas of the music. Jealousy and infidelity are explored on the languid ballad ‘Yeah! Oh, Yeah’, the story of a man who murders his wife, for example.

Merritt, as a gay man, is also careful not to make these songs about lust, love and courtship a purely ‘straightwashed’ affair. The perspective of the leering ‘Underwear’ switches genders, while ‘When My Boy Walks Down The Street’ is full of swaggering joie-de-vivre. The way that many of the songs resplendently present themselves exudes a theatricality that could never serve as a backdrop for a somebody purely straight-splaining love, as well as a deep understanding and passion for the music itself. Anyone looking for a deep dive into the album and its ocean of songs should track down LD Beghtol’s 69 Love Songs: A Field Guide, published as part of the 33⅓ series of books about classic albums.

Triple albums represent a vanishingly tiny and select group in the pantheon of pop: decent ones, even more so. Even the mighty Clash found the concept too unwieldy to execute properly on the uneven Sandinista!. But 69 Love Songs works, because it never marries itself to one idea of what it should be. A stupendously talented songwriter, Merritt flits from broken-hearted misanthrope to wide-eyed raconteur in the blink of an eye. It’s a simultaneous deconstruction and celebration of the idea of the love song – what they mean to us, and what it says about the idea of love itself that we should project ourselves and our relationships onto them. Love songs glorify romance, yet rarely (if ever) address the true nature of love – that it can blind us to truths, that it is often hard to maintain and sometimes ends in sadness and heartbreak when it disappears. 69 Love Songs is valuable because it acknowledges these truths. In the context of 1999, it was refreshingly dismissive of contemporary pop fashions, and two decades later, nothing has surpassed it in purely artistic terms.

Listen to 69 Love Songs by The Magnetic Fields here via Spotify, and tell us what you think below!