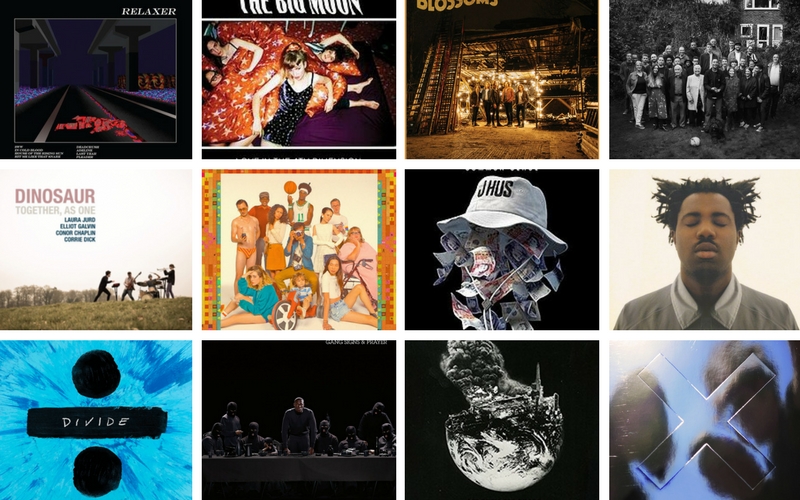 When Primal Scream emerged as the first ever winner of the inaugural Mercury Music Prize way back in 1992, few could pose any immediate criticism. Established on the premise that it would champion the best music to come out of Britain and Ireland, the Mercurys’ recognition of breakthrough classic Screamadelica was not only justified, but later proven by that record’s timeless longevity.

Yet in more recent years, whether or not the Mercury Prize been able to maintain such a level of assured authority has certainly been up for debate. Originally an alternative to the BRIT Awards – whose long-standing allegiance to record sales had excluded a neglected corner of British talent – the Mercury judges haven’t always hit the nail firmly on the head.

Either by distinguishing the already established or lending a helping hand to future promises, winners don’t always live up to the anticipation. Take 2007 – despite Klaxons’ excellent debut Myths Of The Near Future securing victory over heavyweight competitors such as Arctic Monkeys and Amy Winehouse, it was only to begin the slow demise of a band that suffered from the award’s inherent expectation and media pressure.

Another was the short-lived Ms. Dynamite in 2002. Apart from the then-ubiquitous (and admittedly highly enjoyable) hit single ‘Dy-Na-Mi-Tee’, not much was ever to follow. Having been involved with a number of successful collaborations, most notably DJ Fresh’s ‘Gold Dust’, Ms. Dynamite’s maiden solo effort A Little Deeper was quick to be extinguished by her own hype. The same curse struck Speech Debelle in 2009. Though these artists were deserved of triumph, their failures bore cracks in the Mercury’s dignified exterior and pointed glowering attention at its potentially detrimental effects.

That being said, the Mercury Prize has certainly had its moments. Portishead’s launch to stardom in 1995 where the award’s recognition of their debut album Dummy placed the band on the ladder to trip-hop legend status was certainly one for the history books. Thirteen years later, Elbow’s 2008 victory caused such a skyrocket that the ensuing sales of The Seldom Seen Kid rose by 700%, with lead singer with Guy Garvey praising the Mercury Prize as “the best thing that ever happened to us”.

Whilst the Mercury Prize’s affiliation to British indie has always been well documented, its stubborn devotion to the cause hasn’t always paid out dividends. Metal has literally never been given the Mercury nod and in 2011 when Bring Me The Horizon’s There Is A Hell Believe Me I’ve Seen It. There Is A Heaven Let’s Keep It A Secret wasn’t picked for the shortlist, it sparked online uproar. Even inoffensive genres such as jazz, country and folk rarely get a look in and are only ever at best included for tokenistic value. Though this pretence of diversity may have succeeded during past competitions, fans are quickly growing savvy to such ill-deceiving transparencies.

So let’s take a look at this year’s line-up of nominations. Impressions at first glance: they’ve definitely gone for a more commercial bunch on 2017’s roster – unlike the usual niche spread of avant-garde recipients. Last year, our token chart topping act was The 1975; this year we have Ed Sheeran.

The inclusion of ‘big name’ artists within the Mercury shortlist seems to have become a suspiciously recurring theme in recent years. Despite none of these established stars ever actually taking home the bacon (thank God), my bet is they’re a means of stirring up a healthy dose of mainstream interest. Okay, it’s never going to equate to the buzz of the BRITS, but it’s not exactly helping itself when the only televised coverage forms a half-hour segment on Channel 4 allowing only for the unveiling of the winner.

That all said, Sheeran’s inclusion is by no means a simple one. It’s easy to palm off such an absurdly unorthodox candidate, but the fact of the matter is, it’s not like this sort of thing hasn’t happened before. In 2006, the world of British rock music came to a complete standstill when Arctic Monkeys’ name-making debut Whatever People Say I Am, That’s What I’m Not hit the CD shelves. Having exploded on such epic proportions and threatened a permanent revolution in the industry, it would’ve been a crime to award the Mercury Prize to anyone else.

Fast forward to 2017 and Ed Sheeran’s ÷ has followed, and if not beaten, a very similar trajectory. Gaining worldwide recognition, claiming a solo Glastonbury headline slot and holding peak position at number one in the UK album charts for 17 consecutive weeks. If we’re going by that logic, I wouldn’t be too quick to write him completely off, however scandalous a Sheeran win may seem.

Moving a few more steps down the ladder, you’ll notice other chart inhabitants like Alt-J and The xx. Of course, both of which are no strangers to the Mercury shortlist. The xx claimed their first Mercury victory in 2010 with their minimalist self-titled debut and Alt-J in 2012 with their authentic first album attempt, An Awesome Wave.

Whereas The xx’s I See You bears enough justifiable traits to be included in this year’s competition – their style’s eventual integration with Jamie xx’s sampling genius was met by much credited success – Alt-J’s Relaxer remains a mystery. Easily the weakest of Alt-J’s three-album discography, Relaxer’s shortlist inclusion feels like a poorly thought out means to keep it quirky. It’s yet another sign of the Mercury Prize’s willingness to keep a tight hold on undeserving indie music and is ultimately a space filler alongside some of this year’s more serious candidates.

To be honest, there really isn’t much to say about Blossoms. They’re an indie band, they’re from Stockport and they all like to wear trendy leather jackets. As you’ve probably guessed, these guys really aren’t my idea of the heaven-sent saviours of British guitar music. If you’re an NME reader, you’ll probably like a few songs but for a prize that supposedly favours the bold, I’m afraid I just don’t see Blossoms winning.

Following last year’s validation of UK grime where Skepta’s Konnichiwa rightly claimed the prize, it’s no surprise to see a measure of hip-hop filling the Mercury’s ranks. There’s no doubt about it, we’re in a solid period of UK hip-hop and its recognition amongst this year’s shortlist feels more that justified. Though surprising to see Wiley’s Godfather not make the pack, this year’s grime position has been dutifully filled by Stormzy’s chart topping Gang Signs & Prayer. Parallel to 50 Cent’s efforts to bring American hip-hop to prime time radio, Stomzy’s relationship with UK grime follows a similar tangent – see his collaborative involvement with Little Mix’s ‘Power’. Despite its mainstream exposure, whether or not his debut proves worthy of a full Mercury win is a debatable question for Grime fans to ponder.

It’s also nice to see other areas of UK hip-hop be rewarded and recognised by the Mercury Prize. Loyle Carner’s excellent confessional debut Yesterday’s Gone makes the cut, as does J Hus’ fusion of trap and dancehall Common Sense. Amidst this era of grime dominance, it’s so easy to overlook its neighbouring areas of hip-hop and both these artists are flying that flag respectively. Each potentially fill the criteria to wear the Mercury crown and if the judging panel are looking to grant a candidate a launch pad, either of the two would be deserving of such boost.

Another contender who could certainly use some exposure are the all female four-piece, The Big Moon. Following the release of their stylistically scruffy debut Love In The 4th Dimension, The Big Moon proved themselves to be more than they were worth in the world of British indie. Enjoying a year of relentless touring, The Big Moon’s first album attempt is a breath of fresh air for garage rock. Whether they can pull a win out the bag remains to be seen, but even just a place on the Mercury Prize shortlist will be sure to gain them some traction.

Despite knowing how to write an infectious pop song, I wouldn’t really back Oxford’s Glass Animals. Their nominated second album How To Be A Human Being forms a mash of provocative electronica and indie rock, each song willing to seduce the listener with its smooth vocals and groovy atmospherics. To be totally honest, it comes under the same category as Alt-J’s Relaxer – just another spot saved for an unworthy indie outfit. Maybe I’ll be proven wrong, but don’t count on it.

Now it’s time to unload the big guns and if you ask most observers, the Mercury Prize 2017 is all about Sampha and Kate Tempest. Having featured on a string of previous collaborations, Sampha was finally formally introduced to world with his breath-taking debut Process. A defining combination of deep soul and moody R&B, Process is nothing short of a masterpiece. His beautiful and deeply personal vocals are accompanied by sparse, experimental atmospherics, both of which placing him well within the realms of Mercury gold.

Before we get too carried away, Tempest possesses the ideal deterrent to Sampha’s otherwise promised victory. Bearing previous experience amongst the Mercury Prize nominees, – her second album Everybody Down made a convincing attempt at victory in 2014 – Let Them Eat Chaos may in fact be the archetypal Mercury candidate. It literally ticks all the necessary boxes: an avant-garde exterior, politically charged in approach and using a range of pioneering techniques to stimulate our undivided attention. Forget anything you may have heard, if Tempest doesn’t manage it this time round, I’ll eat my own hat… or whatever other figurative forfeit seems appropriate.

Finally this year’s rank outsider spot falls to the contemporary jazz quartet, Dinosaur. Are they going to win? Probably not, but that’s not say they aren’t undeserving. Contrary to the band’s name, Dinosaur’s Together, As One is rooted well within the present. Talented trumpeter Laura Jurd conjures a slick collection of electro-jazz compositions, each easily palatable to any average passer-by. It seems a shame that such an accomplished outfit will only fill the token diversity slot, but their presence will no doubt work to their advantage within the jazz community.

Generally speaking, it’s been a solid year for British music. Whether or not the Mercury Prize can continue to embody its success is still up for debate, yet despite its failures, there are some really wonderful albums in this year’s mix.

Be sure to tune in on Thursday, September 14th on BBC Four or on BBC Radio 6 Music to find out the winner!