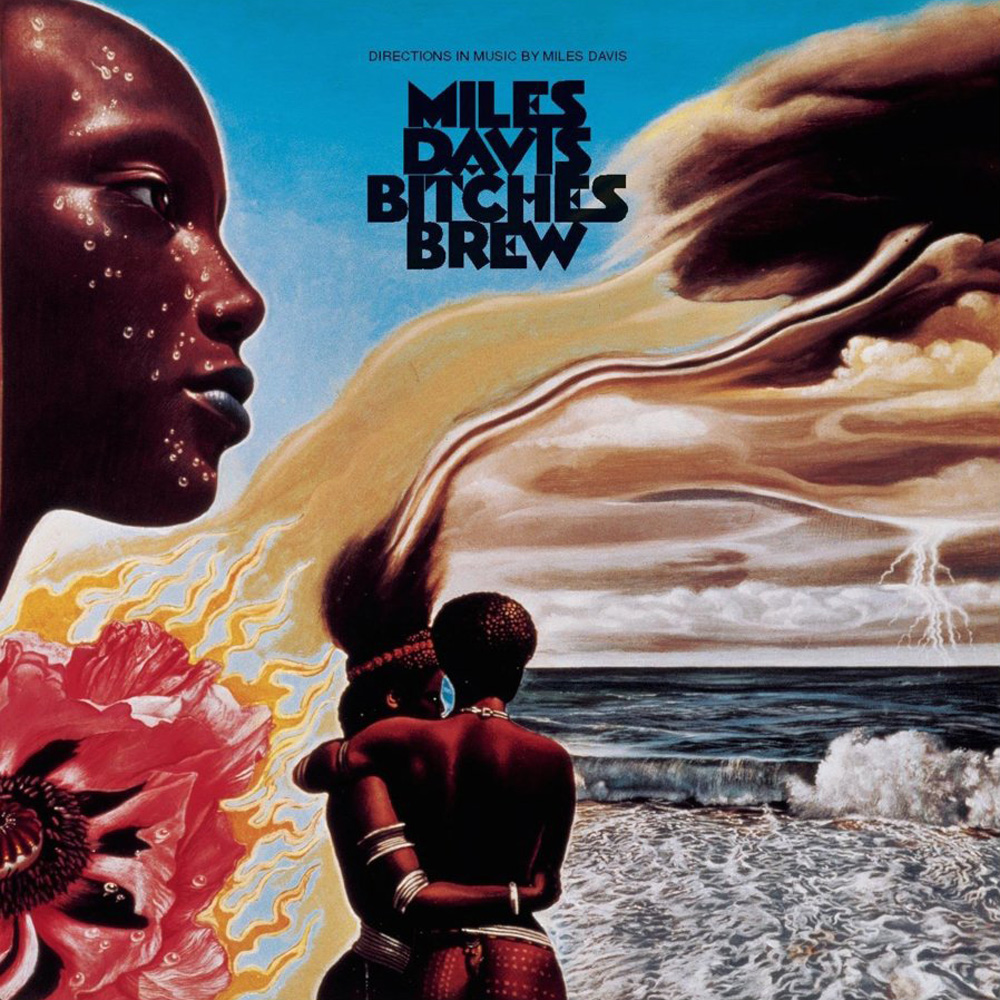 Robert Johnson selling his soul to the devil at the crossroads. Dave Davies taking a razor blade to his amps for the fuzzy riffs of ‘You Really Got Me’. Giorgio Moroder leaning on the production desk while working on Donna Summer’s ‘I Feel Love’ and accidentally inventing techno. Some events, whether they came about by design, accident or the result of convenient fabrication and embellishment, have had such tremendous significance upon the sound of rock and pop music that we still talk about them in the 21st century as the foundational myths of music, the building blocks that have helped it sound like it does, causing impact that reverberated far beyond their own genres. It’s rare that actual albums seem to fit this kind of definition, but the release of Miles Davis’s 1970 double album Bitches Brew completely fits the bill. A massive milestone in the evolution of jazz – already a genre with a history stretching back well over half a century – it also irrevocably changed how rock musicians thought about their work.

Bitches Brew is the kind of album that directly rewards the amount of effort and open-mindedness that the listener is prepared to bring in exploring it. Other than the rubbery, funk-influenced basslines and the whipcracking rimshots and rumbling kick drums of the percussion, it doesn’t bear much resemblance to the psychedelic rock freakouts that inspired it, and, weirdly, nor does it sound a great deal like the jazz-rock fusion (a term coined precisely because of this record) that it so heavily and obviously influenced down the line.

READ MORE: 100 Years of Jazz – The Ten Most Important Records in the History of Jazz

However, the album didn’t appear ex nihilo. It was recorded at a point where its creator was hell-bent on pushing his own art forwards and open to the influence of many non-jazz forms, most particularly Jimi Hendrix, who had recently released his own masterpiece Electric Ladyland and whose legendary deconstruction of the Star-Spangled Banner had taken place at Woodstock literally the evening before Davis began recording Bitches Brew. Set against the backdrop of the political upheavals of the Vietnam War and the decline in popularity of jazz in the face of rock and pop in 1969, Bitches Brew was the result of a decision to continue exploring the all-electric route that had been established by In A Silent Way, which Davis had released that summer to widespread acclaim.

Late in August that year, he and a band of key players, among their number some legendary names like saxophonist Wayne Shorter, pianist Chick Corea and electric guitarist John McLaughlin, entered New York City’s Columbia Studio B for an intensive, three-day recording session under the aegis of long-time producer Teo Macero and laid down virtually the entirety of the new album which was to change the trajectory of jazz forever. Beginning with little more than some loose frameworks of chord lines – no scores, no arrangements, no rehearsals – Davis instructed the rest of his band to follow his lead and play anything that came to mind, as long as they used his chosen chord as the basis for their improvisations. The goal, according to the trumpeter’s biographer Quincy Troupe, was to create a “maelstrom of music”, with Davis “at the centre, directing everything like a mad scientist”.

At nearly 95 minutes in length – with an additional 12 minutes if you picked up the 1999 CD re-issue with seventh track ‘Feio’, recorded several months after the rest of the album – it’s virtually impossible to make sense of Bitches Brew in one sitting. It’s just too much to take in, a whole morass of invention that rarely formulates into anything you’d regard as conventional. This applies to everything, right down to the number of instruments – at any one time, there are as many as two bassists, three keyboardists and pianists, even four percussionists. But at the same time, you immediately realise that this was no brain dump. Rarely is it true, but out of chaos can come order and ingenuity.

Davis’s hunch was right: by not communicating many preconceived notions of mood and tone, his band was forced to pay close attention to each other’s performances as well as their own. After they had finished recording, with hours of meandering material in the can, Teo Macero then came into his own behind the production desk, subjecting the raw material to a ruthless editing process as well as using special effects, like tape loops, tape delays, reverb chambers and echo effects, to hammer them into new structures. The old cliché of the studio being used as another instrument rings resoundingly true on Bitches Brew. Macero’s contribution to the finished record, although he appears as a credit, is at least as important as Davis’s own as an overseer and director, as it was him who had to hammer everything into shape.

Davis’s impressionistic arrangements coupled with Macero’s hypnotic, swirling productions drew in many fans of psychedelic rock. The six pieces, with the exception of the sub-five-minute ‘John McLaughlin’, are huge morasses of creativity, never conforming to a steady shape yet unmistakably unified as they move along and evolve. In the two longer pieces, the swampy ‘Pharaoh’s Dance’ and the ominous overtures of ‘Bitches Brew’ which each take up one side of the first disc of the album, the musicians seem to be orbiting a kind of undefinable centre that never quite coalesces. The idea of individual players breaking off and soloing while others riff around a central musical theme was one that jazz had always been about, of course, but never had that theme been so abstract and loose. This time, it was about texture rather than virtuosity.

The second half breaks down into (slightly) shorter tracks. Some breathtaking showmanship is on display amid the dissonant tone clusters of the spectacular ‘Miles Runs The Voodoo Down’, influenced heavily by Hendrix’s ‘Voodoo Chile’. The rumbling rhythmical storm of ‘Spanish Key’, built on Davis and McLaughlin trading riffs, and the completely re-tooled version of Wayne Shorter’s ‘Sanctuary’ are the lengthier pieces, with the moody ‘John McLaughlin’ impossible to ignore among the massive, mutating compositions that surround it. It’s as much a feat of technology as it is creativity, and one that’s very hard to get an initial handle on. Breaking it down and consuming it track-by-track is a good way to begin getting into it on a deeper level, but Bitches Brew is also possible to enjoy passively, as a backdrop to your thoughts rather than a concentrated listen.

Bitches Brew’s great legacy, aside from being Miles Davis’ second, undisputed yet completely different sort of masterpiece after 1959’s Kind Of Blue, is that its impact is still reverberating today, and it’s not limited to the jazz genre in which you’d most easily place it. It was the sound of a man in his mid-forties, perceived by the public at large as a figure from an antiquated style of pop culture and as having a certain kind of niche audience, effortlessly accessing the attentions of another, younger generation and stealing a march on rock music and the political urgency it could communicate. Bitches Brew’s mesmerising artwork, the work of German surrealist painter Mati Klarwein and best appreciated on the vinyl edition’s breathtaking gatefold panorama, suggests this too, seeming to communicate a psychedelic vision of the same kind of all-encompassing pan-African sense of identity that many Black political movements around the world also espoused at the turn of the Seventies, the Age of Aquarius. It all meant that Bitches Brew quickly sold half a million copies, vastly more than the usual 50,000-60,000 units that his albums normally commanded, and saw Davis playing noisy rock venues instead of refined jazz cellars, later that year playing the Isle of Wight Festival alongside the guitar gods of the day. The elegant, mohair suits associated with his regular image were swapped out for a get-up of suede, leather and scarves. All of a sudden, the jazz icon belonged to a different world.

Its influence is not only sonic but conceptual, causing all kinds of artists from very different disciplines to think about their own work in new ways. The rolling, fugue states that Davis and his band conjured up inspired early prog-rock acts such as Soft Machine and King Crimson in their compositional strategies. Electronica and trip-hop pioneers like Aphex Twin and Portishead loved it, and Radiohead cited Bitches Brew as a key strand in formulating OK Computer. The modern-day likes of Flying Lotus and current jazz torchbearers like Kamasi Washington also owe a clear debt.

It’s also a salutary lesson in the art of music criticism, warning us that our gut instincts and critical processes can often be misleading or even wrong, especially when confronted with things that don’t initially conform with our expectations. Pet Sounds, Kid A and My Beautiful Dark Twisted Fantasy all suffered from it at first, and upon its release in early 1970, at least as many jazz critics panned Bitches Brew as praised it. In the same way that Dylan was branded ‘Judas’ by some small-minded folk purists for embracing the electric guitar in the mid-Sixties, Miles Davis was shunned by some jazz fans for diluting his sound with what they regarded as an inferior musical form.

The Penguin Guide to Jazz accurately sums up the divisive, enduring reputation of Bitches Brew as “one of the most remarkable creative statements of the last half-century, in any artistic form. It is also profoundly flawed, a gigantic torso of burstingly noisy music that absolutely refuses to resolve itself under any recognised guise.” It’s an album that’s vague enough to be all things to all men, to allow anybody to take something from it, yet definite enough to be an enduring classic of jazz.

Listen to Bitches Brew by Miles Davis here via Spotify, and tell us what you think below!