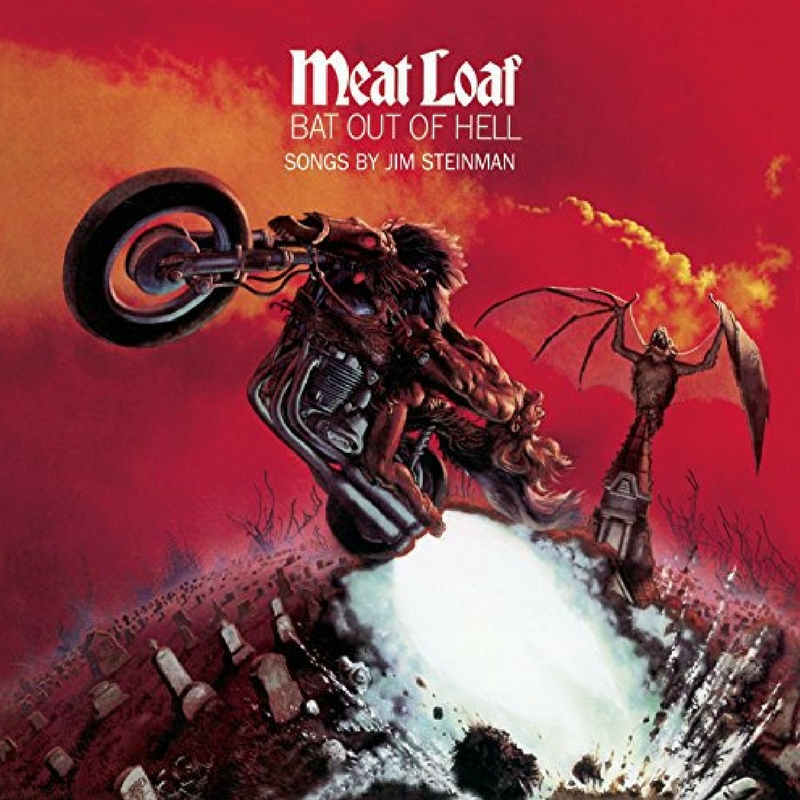 During his Last At Bat Farewell Tour back in 2013 (even though it was not a farewell tour), it was clear Meat Loaf (born Marvin Lee Aday) was approaching that point where age inevitably takes over. Moreover, having to sing the entirety of Jim Steinman’s musical centrepiece Bat Out Of Hell in 2013 cannot have been any easier to sing than all the way back in 1977. It’s baffling that a good portion of people disregard this album as too cheesy and too ensconced in classic American cringe. On some level this is true but arguably, Bat Out Of Hell neutralizes said cheesiness with such omnipresent musicianship and memorability that very few popular albums have ever matched. It’s the fifth biggest-selling album of all time for a good reason.

Growing up, Meat Loaf did not have the easiest childhood in the world. His father, who was a policeman, was a raging alcoholic who seemed to have spent more time at the bars in Dallas than with his son. As if it wasn’t bad enough that he was bullied at school because of his size that, soon after, became useful when playing American football. After receiving the inheritance from his mother after she died from breast cancer, Meat soon landed himself in Los Angeles in 1967 and set about finding a career using his natural talents as a singer and actor.

Technically, Bat Out Of Hell is not Meat’s debut album, as Motown invited him, along with colleague Shaun “Stoney” Murphy, to record an album, titled Stoney And Meatloaf, with them after they attained publicity from performing in the late ‘60s psychedelia musical Hair. But, ultimately, the album failed miserably and has barely any significant relevance in Meat’s discography.

It was when Meat auditioned for Jim Steinman’s Vietnam War musical More Than You Deserve that they first met. All it took was for Meat to sing a few lines for him and Steinman to become lifelong friends. A few years later, Meat successfully auditioned for the role of former delivery-boy Eddie in Jim Sharman’s film adaption of Richard O’Brien’s classic musical ‘The Rocky Horror Show’. It was around this time that he and Steinman began working on Bat Out Of Hell. In the film, Meat shows off his singing talents on the track ‘Hot Patootie – Bless My Soul’, whilst riding around on a motorbike, before being brutally stabbed and killed by Tim Curry as Dr. Frankenfurter. This was considered Meat’s true claim-to-fame moment thanks to the film’s critical acclaim and box office success but, little did he know, Bat Out Of Hell would go on to sell 43 million copies worldwide and cement him as a rock’n’roll icon. Now let’s examine why this album was became increasingly popular as the years went by.

Originally, Steinman intended Bat Out Of Hell to be a rock’n’roll ‘Peter Pan’ musical called Neverland but Meat and himself both agreed to make a seven-part album instead (although, fun fact: Meat would have played Tinkerbell in Neverland…). Its opening 10-minute title track introduces the listener to Steinman’s world of ultra-theatrical rock’n’roll coalesced in operatic tendencies (which he later coined as Wagnerian rock). The seismic impact of the opening power chords from guitarist, and the album’s producer, Todd Rundgren followed by infamously majestic and swaying piano intro section (played by Roy Bittan – also a member of Bruce Springsteen’s E Street Band at the time) is one of the most exciting snapshot moments in rock history. Prior to Meat’s intervention, Rundgren’s initial guitar solo lays out the symbolic note progressions of the song.

In terms of subject matter, ‘Bat Out Of Hell’ tells the story of young motorcyclist who leaves his “rotting old hole” of a town behind but tragically ends up in a car crash and dies. The subsequent songs on the album envisions dedicated flashbacks of time spent with his girlfriend. As the protagonist rides on, it is clear he is still desperately in love (“Oh baby you’re the only thing in this whole world that’s pure and good and right”) but the thought of a better life spurs him on with enduring speed (“I can see myself tearing up the road / Faster, than any other boy has ever gone”). From the iconic motorbike engine and crashing sound effects to the ubiquitous chorus, everything that ‘Bat Out Of Hell’ stands for musically is nothing other than a perfect “car crash” song (as quoted by Steinman), the ultimate anthem of youthful, reckless, nothing-left-to-lose abandon.

Bat Out Of Hell has been compared by many to the works of Bruce Springsteen, notably his Born To Run album where, funnily enough, Roy Bittan is also the man behind the piano. The similarities on the track ‘Thunder Road’ and the closing track ‘For Crying Out Loud’ from the album in question is uncanny. But there’s more than just Springsteen in the works. The second track ‘You Took The Words Right Out Of My Mouth (Hot Summer Night)’ is a fascinating blend of the bell-sounding stimuli from eccentric pop production genius Phil Spector and The Who’s formulation of power chords. This track is known primarily for the wolf-with-the red-roses conversation with the male voiced by Steinman and the female by Marcia McClain. The protagonist in this song is flashbacking to first time he met and kissed his girlfriend and how that first-kiss experience was simultaneously nerve-racking and uplifting (“Oh, you hold me so close that my knees grew weak / But my soul is flying high above the ground”).

On the very angelic ‘Heaven Can Wait’, the protagonist does not wish to die just yet – he is happy in his state of nostalgia. In Steinman’s Neverland musical, ‘Heaven Can Wait’ was initially written for the moment Wendy married Peter Pan. Whether one likes or dislikes this album, one cannot deny that Steinman is a ballad mastermind. The heart-warming piano arpeggios and expressive lyricism do not convey pretentiousness in the same way that other ballads, like John Lennon’s ‘Imagine’ (a horrifically overrated track), do.

Following this is ‘All Revved Up With No Place To Go’. Admittedly, the saxophone introduction is the only thing about Bat Out Of Hell that is worth any sort of criticism but, in the macro scheme of things, this is a negligible setback for this groundbreaking album. In this song, the protagonist seems to be going further back in time before he met his girlfriend. “But every Saturday night / I felt the fever grow” emphasises his impulse to find a lover and the song title itself euphemises these pressurizing masculine urges. But it’s the outro where the track exceeds expectations. The dynamic shift in tempo coupled with Meat’s enthralling voice screaming “All revved with no place to go!” is one of myriad reasons why Bat Out Of Hell is an indispensable rock staple.

When Steinman was infuriated that no labels were signing Meat and himself, because of the supposed lack of singles, ‘Two Out Of Three Ain’t Bad’ was his rejoinder. Steinman’s country music influences, which include Hank Williams and Johnny Cash, indicate how Meat’s vocals come across on this track. Listen to ‘I’m So Lonesome I Could Cry’ by Hank Williams – the similitude in emotion and vocal delivery is evident. Story-wise, ‘Two Out Of Three Ain’t Bad’ presents an agonising twist of events with “Well there’s only one girl that I will ever love / And that was so many years ago.” However, “But you’ve been cold to me so long / I’m crying icicles instead of tears” suggests that the girl in the past and the girl now are one and the same – she is a completely different person to him now. Once again, the Meat Loaf-Steinman duality shines through on this moving, heart-rending ballad.

Debatably the album’s magnum opus, ‘Paradise By The Dashboard Light’ is Meat Loaf gold. What constantly brings people back is the song’s structure of movements. The first is a fast-paced bluesy rock segment with Ellen Foley bringing her remarkable voice to the table. The lyrics set up to what will be a sexual encounter in the back of a car. The notorious Phil Rizzuto baseball game broadcast segment is set up as one giant metaphor for the noticeable foreplay heard in the background. In the music video, Meat and Foley make out on stage during Rizzuto’s commentary. The third segment entails a back-and-forth argument that occurs right before they were meant to have sex. The girl asks “Will you love me forever?” and the young man responding with “Well, let me sleep on it” conveying the protagonist’s doubts and fears of lifelong commitment to another person. Littered with sing-a-long attributes, one would not be hard-pressed to hear ‘Paradise By The Dashboard Light’ in a karaoke bar somewhere on any given night.

Lastly, ‘For Crying Out Loud’, bathing in its mighty grandiosity, superbly ends the album. Meat Loaf himself has boldly claimed that ‘For Crying Out Loud’ is the greatest song ever composed – the zenith of all compositions. For years he has searched for a song that is superior but, thus far at least, nothing has marred it. The fact that Meat cannot help but cry when this song plays goes to show how intensely passionate he is about that claim. Furthermore, ‘For Crying Out Loud’ is undoubtedly Meat’s best vocal performance on not just Bat Out Of Hell, but on all of his material combined. What begins as a forlorn ballad transforms abruptly into orchestral exhilaration. As the song draws to a close, the protagonist willingly gives his life force to the Lord after reimagining his complicated and exasperating relationship with his unnamed lover one last time.

On first release, Bat Out Of Hell was bashed and beaten by damn near everyone. But just like Pinkerton, The Velvet Underground & Nico, and Led Zeppelin, Bat Out Of Hell proves that the critics were hilariously wrong. Jim Steinman takes life by the hand and presents the listener with an overtly exaggerated interpretation. For anyone who dislikes this LP, I implore them to try and answer this question. Who else could have been the lead singer for Bat Out Of Hell? That’s right – no one else but Meat Loaf had that opera-rock balance or determination. Is it any wonder he lost his voice after touring for the album?

Meat Loaf would go on to suffer a decline in popularity during the ‘80s. The release of Bat Out Of Hell II: Back Into Hell…, and the single ‘I’d Do Anything For Love (But I Won’t Do That)’ (which Meat ironically hates) in 1993 sparked a resurgence in his dwindled fanbase as Jim Steinman returned to the creative fold. In 2006, Bat Out Of Hell III: The Monster Is Loose would complete the trilogy. Much to Steinman’s delight, Bat Out Of Hell is now a musical 40 years later – a dream now made reality.

Listen to Bat Out Of Hell by Meat Loaf here via Spotify, and tell us what you think below!