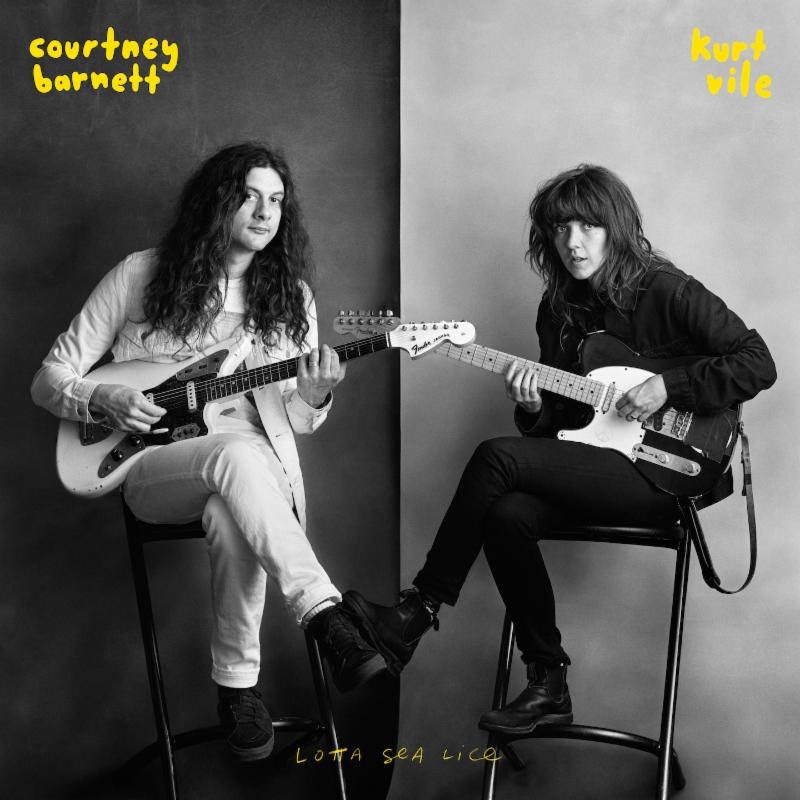 On ‘Lotta Sea Lice’, Courtney Barnett and Kurt Vile aren’t trying to impress you; instead they’re just inviting you to sit on the floor and listen to them play.

There have been many great collaborative duo works over the years: Jay Z and Kanye West; Duke Ellington and John Coltrane; even Frank and Nancy Sinatra. However, what makes Lotta Sea Lice so enjoyable is the genuine respect and chemistry between Courtney Barnett and Kurt Vile, two of the most consistently excellent performers in indie as it exists in 2017. It never sounds like a battle between two well-established songwriters for the spotlight – instead, it’s more of a spontaneous project between two close friends bringing out the best in each other.

A key part of Lotta Sea Lice’s beauty is its focus on the simple but heart-warming theme of unbounded friendship. On ‘Continental Breakfast’, Kurt sings “I cherish my intercontinental friendships / not much very big on enemies” accompanied by a jangling guitar riff and delicate fingerpicking. This is a reflection of Courtney and Kurt’s own friendship, as they are from Melbourne and Philadelphia retrospectively. Similarly in ‘Over Everything’ Courtney sings in her distinctive laconic deadpan “when I’m by myself and it’s daytime cuz down-under / or wherever it is I live it’s evening”, emphasising the distance between her and Kurt.

However, this geographical distance is what makes the album so beautiful and uplifting as it demonstrates the magic and power of music to unify those from different parts of the world. In ‘Over Everything’ their vocals smoothly flow into each other, as they alternate who sings the verse discussing how they both turn to music when they are alone; it’s almost as if they are finishing each other’s sentences. ‘Let It Go’ has such a conversational tone that it almost seems like you are listening to Kurt and Courtney discussing how to create the album as Courtney asks “what comes first the chorus or the verse?” with Kurt replying ”I’m a bit blocked at the moment”. This sense of intimacy is created so effortlessly due to their natural chemistry and can be heard throughout the entirety of Lotta Sea Lice.

Their friendship blossomed over music in the first place as Courtney supported Kurt for a Melbourne gig and gushed about her love for his 2011 Smoke Ring For My Halo album. This is what makes Courtney’s rendition of ‘Peeping Tomboy’ even more beautiful, as it is from the album that sparked her love for Kurt’s music and their friendship. In comparison to Kurt’s original, there aren’t many changes apart from the guitar riff is much slower creating a much lazier atmosphere in reflection with the rest of the album. Also, the guitar riff seems cleaner and sharper instead of Kurt’s hazy and lo-fi trademark sound.

There are other covers on the album including ‘Outta The Woodwork’, which is a version of Courtney’s first track on her The Double EP: A Sea Of Split Peas with its bluesy guitar riff and broody chorus. Another cover is ‘Fear Is Like A Forest’, originally performed and written by Courtney’s wife Jen Cloher this has a much more classic rock sound with the use of distortion and ringing electric guitar. This amass of covers between friends creates an atmosphere of community and friendliness, as music is presented as something to be shared. Thus, while the covers aren’t majorly different from the originals they show the subtle influences of Courtney and Kurt on each other’s sound as well as the genuine appreciation and love for each other’s music.

Lotta Sea Lice seems to have more of Kurt’s distinct style, as the majority songs have a more stripped back style and are framed by soft finger-picking, as opposed to Courtney’s more distorted sound that can be heard on her tracks such as ‘Pedestrian At Best’. This does not mean that Kurt has taken over the album, instead it reflects the casual nature in which the album was record.

Their conversational and deadpan vocal styles intermingle perfectly creating some stunning harmonies while their accents prevent their voices from simple blurring into one. On the final track ‘Untogether’, a cover of a 1993 Belly track, their soft voices complement wonderfully against the peaceful chord progressions and slow electric guitar.

Both Courtney and Kurt are both very skilled guitarists and this shines through without them having to play any kind of pretentious overly complicated guitar solos. Instead they show their skill through their simplicity. On ‘Untogether’ the scattered guitar work of hammer-ons and the peaceful acoustic guitar solos compliment their soft harmonies. Also, on both ‘Let It Go’ and ‘On Script’ the vocals mirror the melody set by the guitar riff, creating a comforting and warm sound. By doing so they prove that guitars can play such an important part in an album without it sounding forced and convoluted.

‘Blue Cheese’ has an innocent and childlike sound reflected by silly lyrics of “I didn’t mean to cough on her / forgot to add the fabric softener”. It almost sounds like something you expect to hear at a children’s party but I think that’s part of the fun of the song; it’s meant to be something light-hearted and silly! The whistling and squeal of “wooo hoo” from both Courtney and Kurt make it impossible not to smile as you imagine them having the time of their lives riding a rollercoaster. This sense of fun is not new to them both as shown by the witty lyrics of Courtney’s solo track ‘Avant Gardener’ as she sings “the paramedic thinks I’m clever ‘cause I play guitar / I think she’s clever ‘cause she stops people dying”.

Lotta Sea Lice is a reflection of the process that brought it to life – the fun, the passion and spontaneity, explaining why it has such as natural and effortless sound. Will this pairing be as infamous or eventful as Kurt Cobain and Courtney Love? Probably not. But is it more tranquil and beautiful? That I am sure of! (7/10) (Sandie Garland)

Listen to Lotta Sea Lice by Courtney Barnett & Kurt Vile here via Spotify, and tell us what you think below!