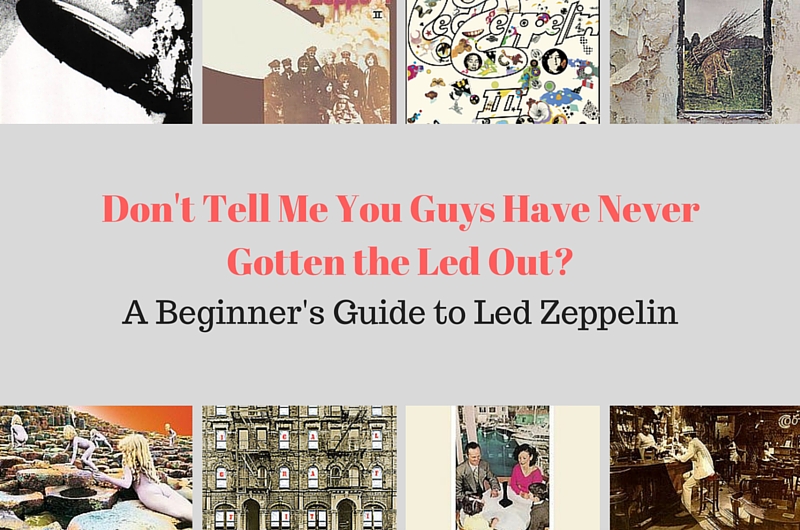 Led Zeppelin is one of Britain’s most beloved rock bands ever, with a distinctly colourful history and four exuberant members. Nicknamed ‘Lord of the Strings’, James Patrick Page, or Jimmy, is the famous lead guitarist and total babe magnet of the group; after all who doesn’t love a man (who is now 72 years old) rocking that double necked Gibson EDS-1252 guitar? Next is frontman Robert Antony Plant, who explodes our eardrums with his iconic high-pitched wail of “baby baby” and luscious golden locks (in his prime). Lurking towards the back is John Paul Jones, a bassist often under looked by fans but is actually the musical genius of the group, melting people’s faces with his rollicking, winding, mind-bending riffs. Finally, there is John Henry Bonham, the speediest and possibly the hardest hitting drummer known to mankind, whose sudden death effectively spelled the end of Led Zeppelin as a creative force in 1980.

It’s hard to listen to a lot of Led Zeppelin’s catalogue with fresh ears, simply because so many of their songs have informed what we now regard as rock clichés. ‘Stairway To Heaven’, their signature song, is possibly the most famous rock track in history, a winding eight-minute epic whose DNA of progressions, build-up, climax and guitar solos are so far-reaching that it’s scarcely believable that they all originate from the same track. The whomping, gigantic orchestrated Eastern riff of ‘Kashmir’ similarly defies belief, its cultural prevalence four decades later only matched by a handful of bands.

But somebody had to actually make those rock clichés in the first place, and it’s testament to Led Zeppelin’s extraordinary skill and creative longevity that they wrote so many of them. Of the 100 most famous rock riffs in music history, Zep probably wrote 15% of them. Jimmy Page himself, his appearance and the way he stood on-stage, informs so many of the received notions we hold about the ‘rock god’ or ‘guitar hero’. Frequently stealing the limelight from Robert Plant’s already seismic vocal styles with his virtuosic soloing, it is easy to understand how their notorious clash of egos came about.

Led Zeppelin’s most important contribution to music was their evolution and expansion of the blues, and what it could be about and sound like. Jimmy Page had been a member of The Yardbirds in the ‘60s, a teething experience for a number of other guitar heroes like Jeff Beck and Eric Clapton – Zep grew out of the phoenix-like resurrection ‘New Yardbirds’ after their disintegration – and so was an accomplished performer of blues and rock ‘n’ roll already. But allied to the other elements of Led Zep, he and his bandmates made blues music speak another language. For decades, blues had always been an American roots music, concerned with real life and the drudgeries of daily existence, but in Zeppelin’s hands it was taken to the realms of escapism and fantasy. Borrowing frequently from British folk and classic literature (all those Tolkien references in tracks like ‘Ramble On’ are not their through coincidence), this was music in which to lose oneself.

In purely commercial terms, Led Zeppelin were the biggest band of the 1970s, selling out enormous tours even as their creative power began to diminish toward the end of the decade. Pick up any of their numerous compilation albums to get a rudimentary impression of their power – the 2007 collection Mothership is the most accessible. Even if you’ve never consciously listened to Led Zeppelin before, you’ll be struck by just much you’ll unconsciously have heard, either in the works of other derivative artists or just in passing.

There will never be another Led Zeppelin, any band that might pack the same cultural clout or even cover the same kind of musical ground, simply because there cannot be. It’s been done. Between them and Black Sabbath, Zeppelin essentially invented the entire genre we now know as heavy rock, which subsequently mutated into metal and various other tangential off-shoots like grunge and nu-metal (we’ll try to forget that last one). Inducted into the Rock and Roll Hall of Fame in 1995 and with career sales of more than 300 million albums worldwide, their mythology and reputation has only grown since their sudden demise in 1980.

After the occasional semi-complete reunion here and there, the three living members of Zep memorably came together in 2007, with John Bonham’s son Jason on drums, for a huge one-off gig at London’s O2 Arena in memory of music executive Ahmet Ertegün, who had championed the band in their early days. Fans came from all over the world and paid up to £20,000 in second-hand ticket purchases for the historic moment, which was immortalized in the 2012 CD/DVD Celebration Day.

What follows is my in-depth guide to their eight (and a bit) studio albums, which together represent one of the most powerful career arcs in rock. You can also listen to our ‘Led Zeppelin: An Introduction’ Spotify playlist by clicking here or looking below!