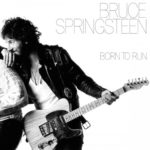 Front cover of ‘Born To Run’

It seems difficult to believe it forty glorious years later, but in 1975 Bruce Springsteen’s career hung in the balance. His first two albums – Greetings From Asbury Park, N.J. and The Wild, The Innocent & The E Street Shuffle, both from 1973 – had earned him critical respect but had not made him a star, falling far below Columbia’s expectations in the charts. So, under record label pressure, his third album Born To Run represented a make-or-break endeavour for him. A rock singer with obvious R&B ambitions, he determined to “use the studio as a tool and not in an attempt to replicate the sound of when we played”, in a tremendous gamble that could easily have gone wrong. But aside from the high quality of the results, the real genius of the album was the sense of artistic growth. In ‘Wings For Wheels’, a 2005 documentary on the making of Born To Run, Springsteen said it was “the album where I left behind my adolescent definitions of love and freedom – it was the dividing line.”

In contrast to those two records, many noted the widescreen, cinematic qualities of Born To Run in both its themes but also its music. This gave it a more accessible quality, compared to the dense, breakneck pace of the storytelling of their predecessors. Despite Springsteen’s rough and ready everyman image, his early music was frequently bombastic and theatrical in its execution – Born To Run sought to underline this aspect, pushing it to the front of the mix. It’s a very distinctive record – gritty yet starry-eyed and romantic, where the broadest brushstrokes of place and setting have just as much importance as the characters and narrative.

For all the months of painstaking tinkering with it in the studio, there’s something so untamed about the title track and its pure-pop, ‘wall of sound’ production. Every instrument is let off the hook and imagines itself as playing the starring role (not least Clarence Clemons’ incredible saxophone, one of the sonic revelations of the album) yet it never sounds cluttered. Springsteen’s grand, feverish visions and sense of spectacle hold the thing together – the way it rhymes “American dreams” with “suicide machines”; the “whoa-oh-oh-ohs” in the run-off; the false ending before the E Street Band strike it up again… it’s knotted and intricate yet so simple to grasp – you wouldn’t even have to speak English to understand its universal message. It’s difficult to listen to ‘Born To Run’ with fresh ears, having become such an integral part of the well-worn rock lexicon and is sometimes misunderstood and adopted as a kind of yuppie anthem, but if you try to strip away all of that and just concentrate on the pure sentiment of the song, it’s still electrifying.

Understanding the eternal themes of ‘Born To Run’, the youthful yearning to better one’s lot in life, escape a restrictive environment and the tension of staying true to oneself, unlocks the rest of the album. It’s as old as rock ‘n’ roll itself, and the same sentiment is constantly hinted at or explicitly re-stated, either through autobiographical writing or fictional constructs. Springsteen is sympathetic to, and optimistic for, his characters on Born To Run, even if it turns out to be misplaced or based on blind faith – in contrast to the rather more pessimistic Darkness On The Edge Of Town three years later. This is matched by the full-blooded, melodic production, which owes a great debt to Phil Spector and provides a suitably large canvas upon which Springsteen can project this inflated sense of romance.

The immortal thrill of ‘Thunder Road’ opens the record, the trickles of piano and guitar building the tension until Clarence Clemons’ sax breaks the dam and releases an unstoppable surge of emotion. Springsteen’s scene setting conflate the personal with the widescreen: “The screen door slams / Mary’ dress waves / like a vision she dances across the porch / as the radio plays”, and enables now-hackneyed clichés like “one last chance to make it real” to seem revelatory in this context. “It’s a town full of losers / and I’m pulling out of here to win” is the kiss-off lineThough it was never released as a single (rather incredibly), it’s a staple of rock radio today and was listed at #86 in Rolling Stone’s 500 Greatest Songs of All Time. The jaunty ‘Tenth Avenue Freeze-Out’ follows in similar fashion, heavy on the piano and sax, with its protagonist ‘Bad Scooter’ a pseudonymous character for Springsteen’s own experiences and memories. He’s never told us quite what a ‘tenth avenue freeze-out’ is, but it’s a memorable phrase and another radio classic.

The excitable opening to ‘Night’ is driven by Gary Tallent’s bass engine and is another scene-setter, and the song’s character, who lives for the night-time and the weekend, is surrounded by like-minded people looking forward to downing tools and forgetting their troubles. Side one closer ‘Backstreets’ is one of Born To Run’s two multi-segmented epics – its grandiose structure, build primarily on Roy Bittan’s chunky piano parts, lends itself to improvisation when performed live. Lyrically, its tales of remembered teenage abandon (with possible homoerotic undertones, as the gender of the narrator’s friend Terry is never specified) provide one of the album’s most enduring character analyses, and of how they interact with the geography of their surroundings, with the romance of “hiding on the backstreets”. The theme of past glories would provide a rich seam for him to return to over the years – most frequently on 1984’s Born In The U.S.A. Musically, it’s like a blue collar, less intellectualised adaptation of Bob Dylan’s ‘60s epics, and remains one of the most accomplished tracks in Springsteen’s now-vast repertoire.

The much-needed pause for breath ‘She’s The One’, with its blocky, Bo Diddley staccato rhythm, is embellished with a beautiful keyboard hook. Again, it uses a character device and a flashback narrative, this time with a guy fretting over the emotional turmoil his wife causes him but ultimately deciding to remain stoic and faithful. ‘Meeting Across The River’ is, literally and metaphorically, a bridging song. The down-and-out protagonist is crossing the Hudson River from New Jersey to New York to meet a connection, to gamble the little he has left on one risky (and, judging by the song’s downbeat tenor, probably doomed) venture.

This feeling of doomed heroism bleeds into the sprawling, 10-minute show-stopping closer ‘Jungleland’, considered by many Springsteen fans to be his greatest song. Suki Lahav was only an E Street Band member for a few years, yet his violin introduction to Born To Run’s closer, combined with Bittan’s signature piano, is one of the most famous rock introductions of all time. When Springsteen’s heroic guitar fires up for the second verse, it still sends a shiver up the spine and pricks the back of your eyes with tears, particularly as you know the protagonists’ last stand ends in defeat and (“They reach for their moment / and try to make an honest stand / but they wind up wounded, not even dead / tonight in Jungleland”.)

Born To Run was critical in forging the much-maligned genre of ‘classic rock’, being one of the first to records to blend soulfulness with rock guitar virtuosity. Despite the hyper-real, inner-city fantasia of the album’s setting, with characters determined to stand up for themselves and find beauty and truth in their surroundings, it’s also the purest distillation of Springsteen’s inspiring (some might say naïve) outlook of American working class life that he ever made. It’s something reflected in the effortless pose he strikes in the album’s much-parodied artwork. Furthermore, it at last broke him in the mainstream, with the album peaking at Number 3 in the US, selling over 6 million copies to date.

Listen to Born To Run here!