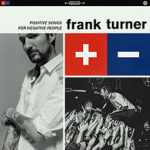 Now onto his sixth studio album, the ever-consistent Frank Turner returns with more of his politically-infused punk/folk/rock crossover which has seen him amass a devoted fan base over eight years. His Glastonbury midday performance this year was prime example of his broad appeal and one which I will admit helped to banish a heavy hangover. His passion for music is patently obvious and his arena shows are now a long way from playing in grotty bedsits that followed his departure from Million Dead.

As a body of work, Positive Songs For Negative People sadly doesn’t quite compete with the excellence of his 2008 debut Love Ire & Song and 2011’s England Keep My Bones due to its heaviness in comparison to his past feel-good hits like ‘The Road’. Turner can quite easily turn an album into a full-on shared, intimate experience but on this record it comes in dribs and drabs alongside slower solo tracks.

‘Demons’ and ‘The Next Storm’ are the typical anthemic sing-alongs, whilst ‘Mittens’ and ‘The Opening Act Of Spring’ offer an emotional respite which make the record feel a little disjointed and non-cathartic.  Frank Turner has rarely been accused of having many forgettable tracks but this album is guilty. The final track on the record ‘Song For Josh’ was recorded live in Washington DC and is a tribute to Turner’s friend who committed suicide following a bout of depression. Turner’s skill as a wordsmith is on show as he channels his grief in one direction and forges a slow acoustic ballad, which features some stand-out lyrics including: “You can measure the mark of a man on the day he died / in the mixture of memory and wreckage that he leaves behind”.

Despite its clear differences from his early work, Turner knows that he can experiment and not just include jolly singalongs. The final track summarises the themes on the album as well the album’s title: strength, optimism and love. (6/10)