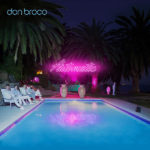 Proving that critics have absolutely no impact on record sales, Bedford’s slick alternative rock outfit Don Broco’s critically slaughtered Priorities performed well in the charts back in 2012, reaching an eventual high of Number 25. Their inoffensive ‘Busted meets Biffy’ melding of chart-bound tunes to loud, vaguely metal aesthetics has been done to death over the last twenty years, but clearly it’s a formula that still has a bit of appeal left to be squeezed out. A midweek album chart has put their second album Automatic at Number 6, so it’s performing as Sony would have liked it to and attracting their fanbase back for another romp through the pop-metal songbook. If you’re fan and you’ve already bought it – great, we’re glad that somebody enjoys it. But don’t read on. Suffice to say, Don Broco are an object lesson in the falsehood that, just because you have guitars, doesn’t automatically mean one’s art is somehow superior, more genuine or worthwhile.

What strikes you immediately about Automatic is how mainstream it is. Clearly taking cues from The 1975’s success, this record is much shinier and less heavy than its predecessor, with more synths and a distinctly arena-rock production, the ambition is clearly to take over the big venues. However, the sound is there but there songs are not. Rob Damiani’s pitch perfect rock vocals are so tidy that they’re rendered totally anonymous, something not helped by the bland, vaguely aspirational, heard-it-a-million-time-before lyrics like “gonna keep on, keep on pushing” (‘Keep On Pushing’) that populate the record. The music is precision-tooled and engineered to within an inch of whatever life these flat-pack songs ever had in the first place, and often sound like the generic soundtracks to some modern update of ‘Miami Vice’. Even the garishly unsubtle artwork underlines this feeling. At least Don Broco were divisive with Priorities ­– with all the edges taken off, it’s difficult to even muster an opinion, let alone a passionate argument for or against.

Don Broco are technically proficient, with lots of rather snazzy Level 42-style bass hooks scattered throughout the record, but the cluttered, maximalist production all too often hides these. Right from the opening two tracks (the singles ‘Superlove’ and ‘Automatic’), the pace, tone and general narrative arcs of the songs are firmly established and are very rarely played with or built upon. ‘What You Do To Me’ begins with a sense of purpose, with acoustic guitars and a trace of modern R&B in its intro, before it’s subsumed into the bland Enter Shikari / All Time Low / 30 Seconds To Mars template. The cavernous drums of ‘None’ provide a modicum of relief, overlaid with some fashionable “aah aahs”, could do business as a single.

‘I Got Sick’, unless it’s an extremely clever satire (which is not at all clear), is a really very creepy projection of male sexual entitlement – “my heart beats for the thrill of watching you / where you’ve been, what you’ve had to eat, I’m always watching you”. Ew. It’s by a great distance the worst track of the album. But this song aside, in fairness there are no egregiously awful tracks on Automatic – by the same token none of them ever sound like they’re going to elevate themselves out of their buffed, ultra-shiny productions and become more than the sum of their parts, or even threaten to shake you awake and make you feel anything. Except for the closing track ‘Further’, if you’ve made it that far, with a skipping rhythm and sparser production that should see it finish their live sets for a while.

It may scan as an alternative rock record, but anything beyond a surface-level inspection uncovers that nine of the ten tracks are identikit, interchangeable poses that could be played in any order. Automatic brings to mind that old trope of the greatest artists distinguishing themselves because they need to be on stage, rather than merely wanting to be. Don Broco have the clothes, the haircuts, and make all the correct noises, but underneath the image is nothing, and a second album of featherweight, instantly disposable pop-metal bears this out. (3/10)

If you really must, listen to Automatic here.