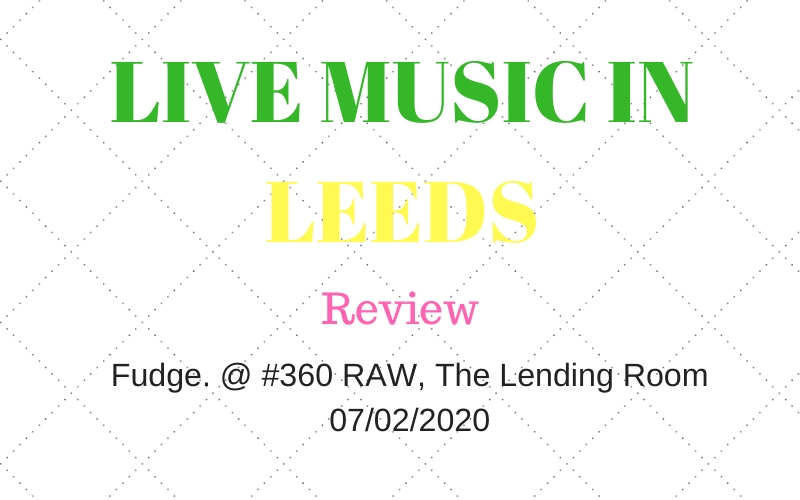 With an intimate, DIY feel, the Lending Room above perennial student favourite drinking hole The Library is the perfect testing ground for upcoming bands ready to make their mark on the surrounding Leeds scene. Last Friday’s 360RAW/BBC Introducing… event continued this lineage as the more than sold out show attracted a more than feverous audience. Emitting a warm and open atmosphere, the air of expectancy was more than rife ahead of seeing the best emerging live acts Leeds has to offer with headliners Fudge. as the must-see act of the night.

Opening up with animated indie-rock stylings that turned heavier through almost agitated and uncontrolled energy, The Harriets set a high precedent for the night. They were followed by Teeff, whose fuzzy and grimey riffs mixed with grungy vocals give them strong backing to their self-proclaimed title as West Yorkshire’s best duo. Sir Curse’s eccentric trip-hop infusions crossed with a creepy but quirky marionette aesthetic sprung into full force with unsettling synchronicity despite each member channelling their own cataclysmic energy and manic swagger.

Making an entrance with a vibrating energy that instantly cuts through the atmosphere of the venue, no time is wasted in disrupting what have so far been rather tame reactions to the music up to that point, as the crowd is immediately met with a heavy wall of sound before a cheeky, nonchalant Cam introduces Fudge. to the audience of “sexy motherfuckers”.

Instantly channelling a mosh out of what has been a relatively subdued crowd, Fudge.’s amped madness projects a thrilling experience which parts all sonic objection from those it’s being aimed towards. Egging on the crowd with their relentless style, each member (Otto on guitar, Cam on lead vocals, Angus on drums and new bassist Tom) oozes an unphased bravado making the frenzied moshing happening before them feel like the most natural thing in the world. With Cam jumping in and out of the audience, the line between performance and indulgence felt more blurred than that of most bands you’ve probably seen – and all that’s just in the first song.

With the crowd suitably warmed up, combined with welcomed egging-on from lead Cam, it’s easy to see individuals lose themselves to mob mentalities becoming a single body of reverence to Fudge.’s music. Through their relentless punk aggression and frantic encouragement the crowd quickly grows dizzy on the mayhem between each song.

Despite their youthfulness and having only been together two years there’s an endless dynamism and fluidity in Fudge.’s playing style that reflects a confidence to their performing. It’s rare to see this level of control and authority over a crowd this early in a band’s career, promising a high chance of longevity on the gig circuit.

The band broke up their performance with the trancier ‘Walrus’, a single of their brand new EP Panic On, a moment of easily drawn-upon emotion, which momentarily subdued the crowd before the song let rip and the revolt started up into full blown mania once more. Testing the crowd’s mettle with a slew of crowd surfing, the willingness of the crowd to act and do what ever was needed to propel the gig was a testament to the group’s boisterous style.

Despite a tech problem involving a damaged delay pedal, the group continued with a pretty much flawless performance with only minor recharges (they are human, after all), peppering the night allowing for what felt like a nonstop barrage especially with Otto’s slick guitar riffs kept a constant energy going throughout the night.

Outside of the group’s small discography, they also treated the audience to a range of covers, which perfectly summed upped the hysteria of the crowd as well as what Fudge. were probably feeling in performing to such a well receiving crowd in their hometown. Other highlights included an impromptu crowd member collaboration and equally energised cover of Devilman’s ‘Drum And Bass Father’. If the crowd wasn’t already bowled over by the first half of the show this final leg of the night definitely added an element of surprise to the night.

With the crowd left satisfyingly exhausted post-gig yet still wanting endless encores, it’s easy to see why Fudge. have been a talked-about act within industry circles. Ferocious, amped and all around enjoyable, the gig felt like a true moment of catharsis in a way that few new rock acts are able to harness.