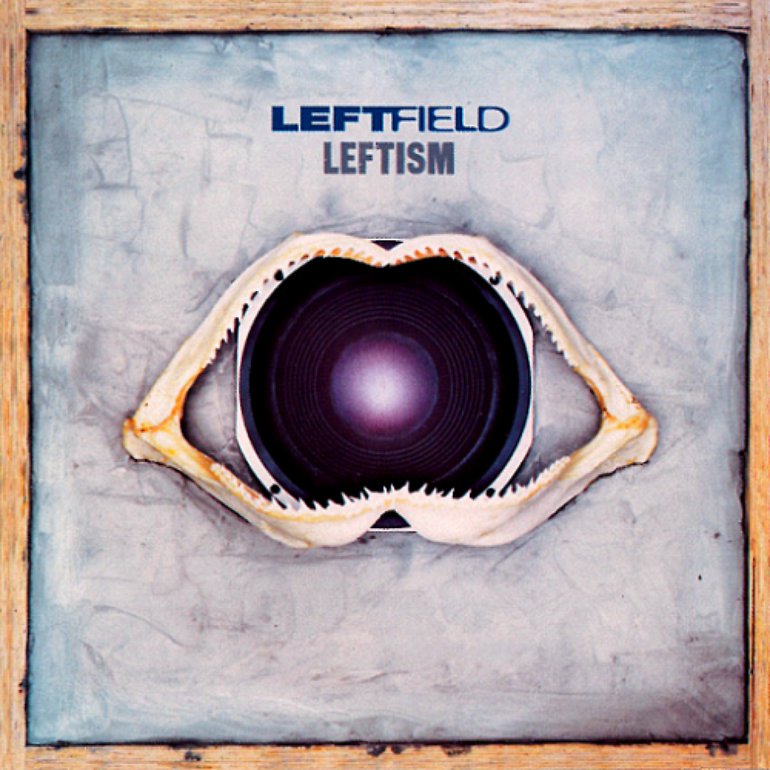 Although house and techno had been causing moral and cultural shockwaves in Britain when it emerged as a youth phenomenon at the end of the Eighties, to the extent that it forced a change in the criminal law to attempt to curb illegal raves, the music’s power had largely been constrained to the single format. Extended mixes on 12” vinyls seemed to be the natural home for it, the most logical way to communicate its power. With the rare exceptions of albums from the likes of Underworld and Orbital in 1994, the genre didn’t tend to produce great long-players – or, at least, that was the popular and critical perception. That was no longer the case by early 1995, however, with the release of Leftfield’s debut album Leftism, British dance music’s first indisputable classic album, and one that didn’t have to dilute itself or compromise to earn its reputation.

Leftfield was established in west London at the end of the previous decade, in the context of the cultural crucible of acid house, by musician and producer Neil Barnes. Releasing his first efforts ‘Not Forgotten’ and ‘More Than I Know’ on the tiny independent label Rhythm King, he prevailed upon a former punk musician named Paul Daley to help him remix that material, and the results were described as ‘progressive house’ by the authoritative dance publication Mixmag. It was a hard-hitting, immersive style that went on to hold sway in nightclubs from the early Nineties onwards.

As the decade progressed, so did Leftfield, quickly racking up a UK Top 20 hit by late 1993 with ‘Open Up’, their fifth single, in collaboration with former Sex Pistols and PiL frontman John Lydon. Barnes and Daley were already a fearsome live prospect by the middle of the decade, infamously making the floors and walls of venues visibly shake at huge London gigs – at an all-nighter in Brixton in 1996, their 137 decibel soundsystem made plaster fall from the Academy’s ceiling. But 15 months of silence led to some of the highest levels of anticipation ever to surround the release of a British dance record, but any doubts or nerves that fans may have had were immediately dispelled when Leftism arrived in late January 1995.

Avoiding the traps of many contemporaneous dance records of the mid-Nineties, which tended to suffer from a lack of variation and the imagined necessity for immediacy, Barnes and Daley decided to take a more subtle approach for much of their debut full-length statement, opting for explorations of texture over bursts of hedonism and novelty. If there’s a comparator or an equivalent to Leftism, it’s the try-everything experimentation of a band like The Clash circa London Calling, rather than anything in the immediate sphere of dance music. Not for nothing is Leftism’s front cover an image of a speaker cone framed by a jawbone.

There are guest vocalists on Leftism, something that would become a fixture of dance albums that sought a crossover audience (see The Chemical Brothers), but they don’t overpopulate the album and they dovetail into the needs of the music, subservient to it instead of using it as a platform for their own personalities. Singer Neil Cole, credited as ‘Djum-Djum’, delivers a rapid-fire string of vaguely African-sounding gibberish (apparently his own invented language) that serves to enhance the adrenaline rush of ‘Afro-Left’. The ribcage-shaking bass of ‘Original’, a soulful and trip-hop-influenced gem of a track that has a cinematic, worldly quality that other dance artists rarely achieved in the Nineties, is capped off with the gorgeous vocals of Curve’s Toni Halliday. The brilliance of Lydon’s contribution to the aforementioned ‘Open Up’ hardly needs to be stated, the wide-eyed malevolence of his “burn, Hollywood, burn… take down Tinseltown” incantations matching perfectly with the incendiary, skull-crushing house that Barnes and Daley conjure up.

Instead, by and large, the real core of Leftism is to be found in its instrumental deep cuts, where Barnes and Daley use huge sonic canvasses to explore emotion by way of texture. From the opening tones of first track ‘Release The Pressure’, whose notes dissolve blissfully and sound like a new dawn, the emphasis is primarily on vibes, not easy hooks or the more immediate gratification of high bpms. The hazy aura of ‘Melt’, whose vaporous horns sound the like the sonic equivalent of a mirage on the desert horizon, and the stunningly atmospheric ‘Song Of Life’, with its cavernous troughs of dub and general demeanour ofdark, druggy spookiness, are the most seductive of these.

It’s not until half an hour into the record, with the arrival of ‘Black Flute’, that the bpm is raised considerably, at least to the point where it could be considered anything like conventional ‘house’. Following the monumental epic ‘Space Shanty’, one of the undisputed high points of the decade in British dance music, Leftfield decide to lay off the onslaught and explore a rumbling hybrid of dub reggae and house with ‘Inspection (Check One)’, showing that unexpected flourishes of invention are just as impactful as keeping the tempo up. In this way, Leftfield continually play with their audience’s expectations throughout this seminal debut. They decide to end things on a low-key note, with the dignified anger of Mancunian poet Lemn Sissay set to a percussion-free, ambient piece on ‘21st Century Poem’.

The reception that greeted Leftism was little short of rapturous. Essentially, Leftism marked the point at which British dance music found a mainstream audience in its pure form. Sure, the likes of Screamadelica and Pills, Thrills And Bellyaches had been embraced by indie fans, but those albums were the works of predominantly guitar-based acts building bridges with dance culture, not the other way around. Q magazine, traditionally a pretty straight-down-the-middle rock publication, hailed it as “the first truly complete album experience to be created by house musicians and the first quintessentially British one”.  It was nominated for the 1995 Mercury Music Prize, narrowly losing out to another groundbreaking British dance record in the shape of Portishead’s Dummy. To date, it has sold well over half a million copies in the UK.

The subsequent 25 years have seen Leftfield release just two more albums. 1999’s feverishly anticipated Rhythm And Stealth, despite reaching the top of the UK album charts and picking up another Mercury nomination, never threatened to equal Leftism in terms of innovation and pace, opting to explore bass textures and even more diverse electronic styles with the help of stellar guest spots from rising British rapper Roots Manuva (‘Dusted’) and even the legendary Afrika Bambaataa (‘Afrika Shox’). Following a short tour, Leftfield went into deep freeze.

In 2010, Neil Barnes resurrected the project without Paul Daley as a touring concern, eventually hitting the studio to record the outfit’s first album in 16 years with 2015’s Alternative Light Source. While featuring Sleaford Mods’ Jason Williamson, Poliҫa’s Channy Leaneagh and TV On The Radio’s Tunde Adebimpe, its best moments were purely instrumental, a gentle reminder of the power that Leftfield once had. Although they now have a status equivalent to a legacy act, despite only having released three full-lengths, Leftism is an immortal legacy, setting a new standard for invention and production that British dance musicians have rarely equaled since.

Listen to Leftism by Leftfield here via Spotify, and tell us what you think below!