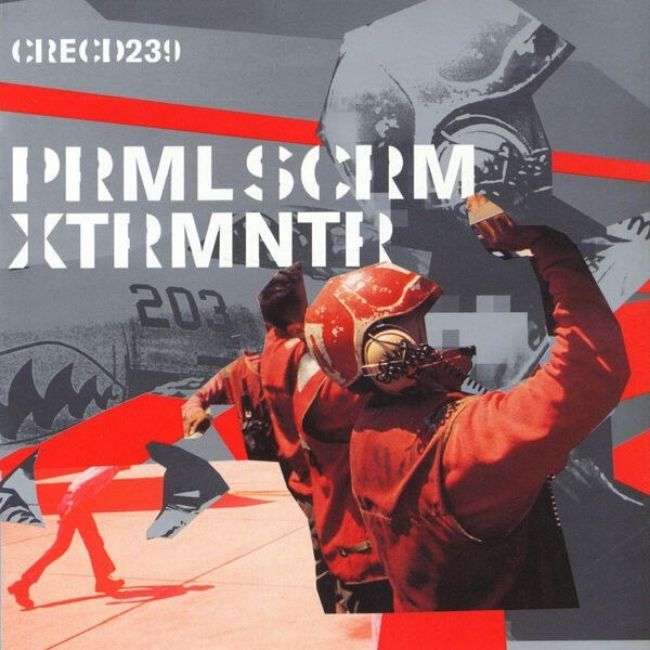 When people talk about Primal Scream, conversation immediately (and understandably) turns to Screamadelica, an album which forged deathless rock’n’roll thrills with the dominant house music culture in Britain at the turn of the Nineties to make one of the greatest stylistic hybrids of all time. As a high-water mark for experimentation, it’s one of the most dazzling achievements in history, an album that’s as fun to listen to as it is to simply marvel at, whose vision is exceeded by its execution. But this analysis often unfairly obscures XTRMNTR, an album they released a full nine years later in 2000 and which rivals Screamadelica, both in terms of its sonic savagery and the boldness of its vision for where popular music should be going, arriving after a decade in which pop music had seemingly abandoned futurism and experimentation in favour of navel-gazing nostalgia with Britpop.

A cursory inspection of the Scream’s back catalogue shows them to have had one of the strangest career arcs in recent pop history. The after-effect of their most populist moments often allowed them to act as a Trojan horse for some of the most avant-garde music ever to grace the UK Singles Chart. So it was that they were able to smuggle a single as resolutely unmelodic and challenging as ‘Kowalski’ into the Top Ten. If you were going to be unkind to them, you would simply dismiss Primal Scream as only being as good as whichever producer they happen to be working with at the time. The likes of Andrew Weatherall and Kevin Shields wrought great performances out of them to forge some of the most sonically extreme records of the Nineties and Noughties, for sure, but they had a bar-room blues default setting similar to that of The Rolling Stones’ mid-Seventies output when left to their own devices. But that ignores the band’s natural skill at interpreting classic influences and bringing out their most transcendental qualities – even on slightly schlocky tracks like ‘Rocks’ or the preposterous ‘Country Girl’.

XTRMNTR has a pretty much equal claim to being Primal Scream’s finest hour, however. Released at the end of January 2000, mere days into the new millennium whose arrival had been marked by a moment of national optimism, XTRMNTR presented a nightmare vision of Britain as a soulless, profit-driven dystopia, in which individuality, protest and counter-culture were not crushed by outright oppression but rendered pointless by the lumpen indifference of populist thought. A nation of garish malls and fast food chains, of cynical politicians and unaccountable power wielded by massive, unchained global business. This was Johnny Rotten’s snarl of “no future” blown up to an album-length canvas, then updated with contemporary production techniques courtesy of a small army of star names such as Kevin Shields, David Holmes, Adrian Sherwood and The Chemical Brothers.

While the foundational stones for its sound were established with 1997’s fine Vanishing Point album, another immensely inventive Scream album that goes overlooked, the key point on the graph building towards XTRMNTR was the February 1998 EP If They Move Kill ‘Em. Not only did it house Kevin Shields’ face-melting remix of the title track – dubbed the ‘MBV Arkestra mix’ and included on XTRMNTR as well – but it coincided with the My Bloody Valentine genius becoming a temporary touring member of Primal Scream themselves, a state of affairs that lasted until the middle of the Noughties and which made the band a fearsome live prospect. XTRMNTR’s sound was a broad collage of counter-cultural influences, ranging from dub and krautrock to punk and hip-hop. Written almost entirely by Bobby Gillespie and Andrew Innes at their studio in London, the group mixed traditional live playing with percussion loops and layering samples on top of each other to create colossal, cinematic soundscapes.

Where Screamadelica was a day-glo utopia of mutual love and understanding, XTRMNTR was in many ways its polar opposite. Where their 1991 album’s artwork was a riot of primary colours, XTRMNTR was a collage of war imagery, rusty stark orange and gun-metal grey conjuring up an Orwellian word cloud of repression and monotony. While Screamadelica had been a statement of forward-thinking optimism for the decade going forwards, this was a blistering condemnation of pop culture’s failure in the Nineties to build upon it, as White Rabbit’s Lee Brackstone has recently written in The Quietus.

After opening with the blistering assault of ‘Kill All Hippies’, a soundtrack to coke-addled paranoia and misanthropy bedecked with all manner of panic-station screeches and whines on top of a murderously distorted bassline, the listener arrives at the spirit of XTRMNTR is contained in the album’s second track through to its fourth. The sheer joyfulness of the savage volume and transgression of ‘Accelerator’, with Gillespie yelling to be heard above Kevin Shields’ raging guitars, is something to behold. Selected as the album’s final single in September 2000, it also had the esteemed honour of being the last-ever release on Creation, sending one of Britain’s most significant independent labels out with a serious bang.

Then there’s the dystopian, industrial funk and grind of ‘Exterminator’, which plunges us into the political heart of the album. Gillespie’s lyrical style is a cut-up, Burroughs-esque sequence of phrases that seem like non-sequiturs (“incubating ultraviolence, psychic distortion / slow death injectable, narcosis terminal / damaged receptors, fractured speech”) but together paint a chilling picture of alienation and state violence. This intelligent use of fractured language reflects one of XTRMNTR’s key themes, that of words, theoretically a civilising force, actually being a means of control. Playing around with it, then, represented a seizure of the means of communication. Not for nothing was the band’s name stylised in consonants only as ‘PRML SCRM’ on the artwork for the album and its associated singles – Gillespie amusingly explained in a promotional interview that “vowels are capitalist”. Even if you don’t go for this kind of thing, ‘Exterminator’ is an out-and-out banger, impossible to sit still while listening to. All the way through XTRMNTR, in fact, Gillespie’s lyrics are brutally terse and compact, preferring big-picture over detail, but the dead-eyed, malevolent way in which he spits them out is the key to their impact on the listener.

Following that is the first of two appearances for ‘Swastika Eyes’ on XTRMNTR. The slightly friendlier and more conventional mix from the Chemical Brothers was released as the album’s lead single in late 1999, and crops up as the penultimate track, but it’s the Jagz Kooner mix that’s the main attraction. A raging storm of pummeling beats and stinging electro that saw Bobby Gillespie raining down condemnation on U.S. Secretary of State Madeleine Albright for America’s freewheeling foreign interventionism (“your soul don’t burn / you dark the sun / rain down fire on everyone”). Released between two key foreign interventions (Kosovo and Sierra Leone) that represented a new, neo-liberal trend in Western foreign policy, ‘Swastika Eyes’ was arguably prescient of the kind of muddle that the U.S. and UK would find themselves in Afghanistan and Iraq.

After that breathtaking sequence, which acts almost as a precis of the late 20th century’s most significant counter-cultural sonic influences from the Bomb Squad to the noise-terrorism of Atari Teenage Riot, XTRMNTR opts to explore texture rather than continue with splenetic noise. This results in the odd mis-step in the middle of the record: the lurching, skeletal rap of ‘Pills’ and the stark, robotic ‘Insect Royalty’ sounding occasionally like ideas in search of a proper execution, notwithstanding Gillespie’s tremendous “sick, sick, fuck, sick, fuck” rant at the end of the former, which somehow acts as a key signifier of XTRMNTR’s anger spraying in all directions at a hopelessly corrupted world.

The successes, however, far outweigh these wobbles. Instrumental epic ‘Blood Money’ sounds like some lost ‘70s noir-movie soundtrack, a clattering, insistent rhythm with dissonant horns interrupted by icy, claustrophobic stabs of piano. Offering emotional respite from the album’s sonic storm, ‘Keep Your Dreams’ is an expertly timed centerpiece to XTRMNTR, written by recently recruited former Stone Roses bassist Gary ‘Mani’ Mounfield, is blissfully warm and inviting with its washes of synth and lullaby-esque xylophone chimes. Gillespie offers you an escape hatch solution to the world, crooning “I’m going down to the underground / As deep as I can go”.

Kevin Shields’ barnstorming and astonishingly loud remix of ‘If They Move Kill ‘Em’, an enduring marvel of his production values and ear for detail, and the aforementioned Chemical Brothers reprise of ‘Swastika Eyes’ lead to XTRMNTR’s breathtaking closer ‘Shoot Speed / Kill Light’, arguably the greatest individual Primal Scream track ever. A behemoth of throbbing krautrock rhythms, drone-rock production and a killer riff courtesy of New Order’s Bernard Sumner, its utter viciousness derives from how controlled and remorseless it sounds, an alternative to the off-the-chain punk noise of ‘Accelerator’.

Just as Screamadelica had presented British music with a refreshing vision at the start of the Nineties, XTRMNTR was the first great rock’n’roll album of the new millennium. Usually, when politics and rock music mix, it winds up sounding gratuitous, either overly aggressive or overly simplistic. In Primal Scream’s hands, a band who’ve always understood that the power of politically-orientated rock is not in riffing but in rhythm, it was both righteous and ridiculous fun. Twenty years on from its release, it’s unnerving to think how on-the-money XTRMNTR was, and how it feels like a chillingly appropriate soundtrack to our 24-hour news cycle of war, disease, unsustainable consumerism and global debt set against a backdrop of dripping wealth and often obscene inequality.

While their output since has been varied in both style and quality, ranging from the back-to-basics rock nadir of 2006’s Riot City Blues to 2013’s impressively intricate More Light, few bands can claim to have recorded even one masterpiece in their careers. Primal Scream, for all their obvious inconsistencies and faults, have two. While they may now seem content with their position as a legacy act, touring their singles compilations for the last year, XTRMNTR is a thrilling reminder that they were once a band that had something to fucking say.

Listen to XTRMNTR by Primal Scream here via Spotify, and tell us what you think below!