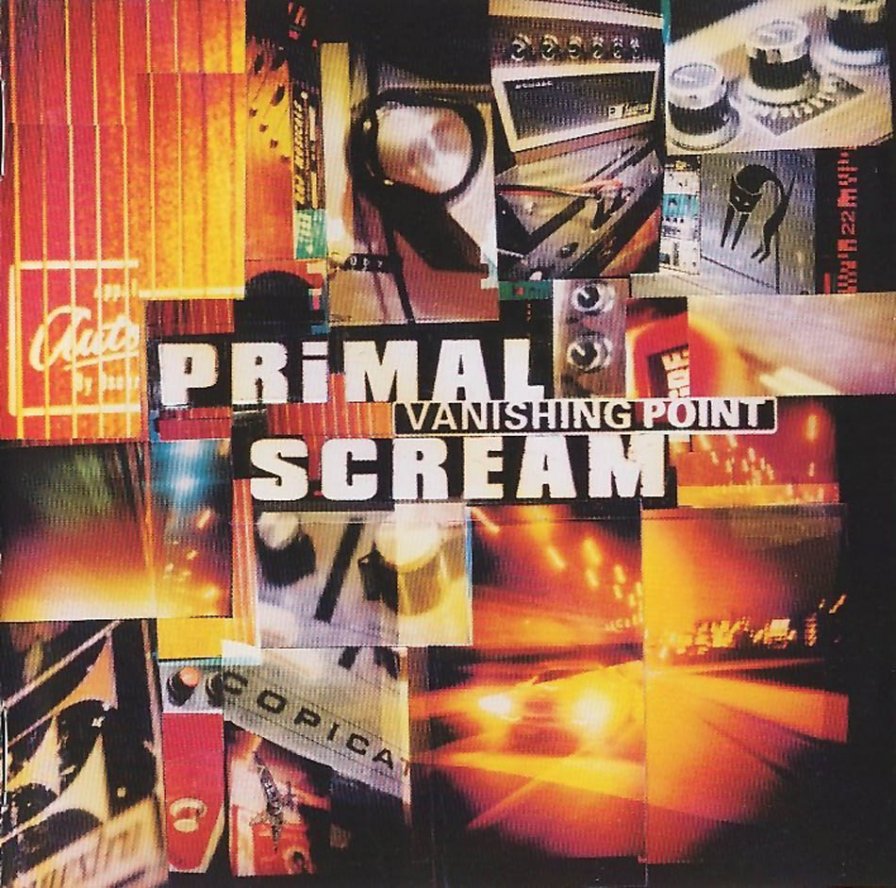 Throughout their career that has now lasted three decades, Primal Scream have consistently proved themselves not only to be one of rock’n’roll’s true chameleons, but also one of its most frustratingly inconsistent creative forces. Their sequence of three albums released in the 1990s, culminating in 1997’s Vanishing Point, perfectly underlines this tendency.

The praise routinely lavished on their 1991 album Screamadelica is all entirely deserved. Building a bridge between house music and rock’n’roll, it united the raveheads and the indie kids in common cause, and put Primal Scream at the cutting edge of music. They reacted to this sudden fame and critical adoration by taking nearly three years to record a misconceived party album, 1994’s Give Out But Don’t Give Up. Indebted to classic rock and blues, it lacked spark and was over-indulgent despite spawning ‘Rocks’, one of their biggest ever hits.

It is this tendency to flit between forward-thinking musical hybrids and a default setting of schmoozy blues-influenced rock’n’roll and Jagger shape-throwing that has characterised their entire career. For every Evil Heat or More Light, there’s a Riot City Blues. As Britpop was at its height in the mid-‘90s, Primal Scream realised they needed to up their game, as they were at risk of being left behind as quickly as they had caught up with Screamadelica.

They responded with Vanishing Point, a fascinatingly diverse and modern-sounding album exploring sounds ranging from psychedelia, dub, funk and krautrock to Deep South rock’n’roll. While it was influenced by classic sound that made the finished product very definitively Scream-esque in keeping with all their previous albums, this time the reference points were Can, Funkadelic and Augustus Pablo.

As it turned out, this musical shape-shift was fortuitously timed. The summer of 1997 saw the release of other similarly ambitious rock records like Radiohead’s OK Computer, Spiritualized’s Ladies And Gentlemen We Are Floating In Space and The Verve’s Urban Hymns that were putting serious distance between themselves and the increasingly stale Britpop scene. Outside of rock, albums like Roni Size/Reprazent’s New Forms, which won the Mercury Music Prize that year, and The Prodigy’s transatlantic chart-topper The Fat Of The Land, were garnering serious mainstream attention. In this context, Vanishing Point was one of the vanguard of records to bust guitar music out of the cul-de-sac of Britpop and forge a path forwards again.

Taking its name and its thematic inspiration from a cult 1971 car-chase movie, Vanishing Point was described by lead singer Bobby Gillespie at the time as a “anarcho-syndicalist speed-freak road-movie record… The music in the film is hippy music, so we thought, ‘Why not record some music that really reflects the mood of the film?’ It’s always been a favourite of the band, we love the air of paranoia and speed-freak righteousness. It’s impossible to get hold of now, which is great! It’s a pure underground film, rammed with claustrophobia.”

The album’s first single ‘Kowalski’ certainly seems to bear out that ambition. Conceived of as an alternative soundtrack to the actual Vanishing Point movie, it’s an armour-plated techno-dub monster of a track. Juddering beats rumble underneath, with searing noise effects and Can and Funkedelic samples laced through with Gillespie’s chilling, menacing “soul on ice” vocals. That it reached #8 in the charts was an astonishing achievement in ultra-safe 1997, boosted by a Faster Pussycat, Kill! Kill!­­-style music video directed by The Jesus & Mary Chain’s Douglas Hart and featuring supermodel Kate Moss beating up the band.

But Vanishing Point is full of delightfully incongruous elements like this. Blissful gospel-blues comedowns like ‘Star’ sharing the same space as strung-out ambient soundscapes like ‘Trainspotting’. As such, the album is a mood rollercoaster where the ecstatic peaks are as intriguing as the nightmarish troughs, spanning everything from garish, mutated Oasis melodies to avant-garde ambience. At times, the sound is positively beatific, at least as ‘up’ as the high points of its two predecessors albeit with a more menacing vibe creeping in from the edges. The amazing space-rock compound ‘If They Move Kill ‘Em’ is a three-minute assault on the senses, all scorched production and blaring effects influenced by Sun Ra and classic funk.

Gary ‘Mani’ Mounfield, joining Primal Scream following the dissolution of The Stone Roses, provides a naturally springy and robust bass foundation for the group’s sound that had previously been slightly lacking. The cavernous rumbles of the totally mad cover of ‘Motörhead’, featuring Gillespie singing through a Darth Vader helmet while all manner of amphetamine effects ricochet around him, illustrate this. The drugged-up, zonked-out ‘Medication’, an extremely loose and sullen take on the kind of Stones-influenced rock they’d perfected, actually features former Sex Pistol Glen Matlock on bass.

On the flip side, there are a few points on the album that are so spiked with bad acid that they seem like they belong on a different album altogether. The menacing ‘Stuka’, the aforementioned ‘Kowalski’ and the rippling dub of the exotic ‘Burning Wheel’ set Vanishing Point aside from anything Primal Scream had recorded before. The jazz-tinged instrumental ‘Get Duffy’ and the lengthy ambient suite ‘Trainspotting’ both show how naturally strong Primal Scream are when they get into the groove. The warm, gently ecstatic ambience of closer ‘Long Life’, so good it made it onto the band’s Dirty Hits collection in 2003.

Oddly, Bobby Gillespie himself doesn’t have much of a voice on the album. The two instrumentals aside, when he does sing his lyrics are somewhat basic and serve to compliment the overall mood of the music to which it is set, rather than the usual rock band standard of the music showcasing the singer’s voice. ‘Out Of The Void’ is one of his more coherent lyrics, offering up a rare moment of vulnerability as he sighs “if I was a child again / I’d be holy and not insane”.

Looking back on their career arc and what happened next, Vanishing Point was a bit overshadowed by XTMNTR three years later. It now seems like a bit of a testing ground for the ideas that they would take much further on that nightmarish, dystopic Y2K masterpiece, and therefore inconsistent as a matter of necessity. And while it is indeed inconsistent, that rockiness is expressed in the sheer, mind-boggling variety of musical flavours on offer, rather than any deep-rooted thematic flaw or in terms of actual song quality. Such was the creative fertility that it inspired the quality dub remix album Echo Dek, released in October that year.

For Vanishing Point is a very good record indeed. It was a phase that Primal Scream themselves had to go through in order to re-discover their raison d’etre after a misconceived falter that was the result of excessive hedonism and unexpected success. Where Screamadelica and Give Out But Don’t Give Up sought to take the listener higher and higher, this album brought them back down to earth. But, deeper than the effect it had on their own career, Vanishing Point was part of a wider trend of sonically progressive and ambitious records that changed the course of British music in the second half of the ‘90s.

Listen to Vanishing Point here via Spotify, and tell us what you think below!